‘Til Death Do Us Part: Weddings and Westeros (Redux)…

Forbidden love and foreboding threats... it wouldn't be a party unless blood was spilled before desert...

An ailing King Viserys (Paddy Considine) has taken a ship to head to Driftmark to arrange the engagement of Rhaenyra (Milly Alcock) and Laenor Velaryon (Theo Nate), son and heir to Lord Corlys (Steven Toussaint). But even as deals and preparations are made, there are those who seek to hide certain truths and others who would willingly expose them to serve their own ends.

And some are merely standing by, waiting for the chaos to begin…

Weddings and Westeros go together infamously badly (or infamously well depending how you value the difference between marital harmony and dramatic tensions that generate ratings). So there’s very few moments in the latter half of We Light the Way where the viewer isn’t shifting nervously on their couch, rocking backwards and forwards and quietly muttering “It’s all about to escalate, isn’t it?” Indeed it is and does… and if not to the legendary Red Wedding quantities of wholesale slaughter, it’s fair to say that the catering department is going to have a hell of a job in the clear-up department.

After Viserys comes in a weakened state (both physically and politically) to set up a marriage between Princess Rhaenyra and Ser Laenor Velaryon (Theo Nate) – the son of Lord Corlys Velaryon (Steve Toussaint) and Princess Rhaenys Targaryen (Eve Best) – a deal is struck that all parties can accept. Corlys gets confirmation the royal line will ultimately end up with his surname and the ‘happy couple’ come to a private understanding that they will give an outward appearance of loyalty but accept that their hearts (or other parts of their anatomy) will find warmth elsewhere.  It’s one of those accommodations that characters find satisfactory in the moment, but you know are doomed to spectacular failure somewhere down the line.

We don’t have long to wait.

The pre-wedding festivities see the powerful families of the land coming to Kings Landing to see the supposedly happy-couple (and likely check out the failing health of the king himself). All goes as well as can be expected with people offering lip-service to the eventualities, some through grimaced teeth and others barely containing their resentments. As with all good extended family gatherings there’s also unspoken truths and secrets that  swirl around like flagons of mead and threaten to spill over given the right nudge – and nudged they surely are. Ser Laenor‘s secret same-sex partner  Joffrey – played by Solly McLeod – (known but dismissed by the elder Velaryon family as a indulged dalliance) makes it clear to Ser Criston that they both share the dilemma of being the secret ‘other’ in the marriage of convenience and therefore have every reason to tolerate each other.  But Criston has already had a talk with Rhaenyra, hoping to run away with ehr… and she was having none of it. The entente cordiale between the men lasts mere minutes as a dance-floor scuffle turns into something more serious that leaves Joffrey pummeled to death and blood splattered all over Criston’s armour… and black-sheep-at-the-reception Daemon very likely pleased with the chaotic outcome (and with some questions as to the extent in his involvement in the moments before). It’s all dark and dangerous and suitable for the risqué world of Westeros… but once again this particular thread plays rather too nonchalantly into the ‘Kill your Gays‘ trope with a kind of medievalesque ‘fridging’.

Matt Smith is making his Daemon a memorably despicable character we love to hate and one to rival the JRs of the television screen. In the opening minutes of the episode – and long before events later in the episode – he has returned to the Vale near Runestone and already committed murder, felling his estranged wife (Lady Rhea Royce played by Rachel Redford). After she lands a particularly sharp verbal barb against his ‘staying power’, he knocks her from her horse, breaking her back… and finishes the job with a rock. Boo and Hiss, indeed. It may or may not come back to haunt him (hint: it will) but for the moment it’s doubtful his pulse beat any faster in the execution of said… execution.

Elsewhere, Alicent has been warned by her departing father that there will come a time when Rhaenyra may well seek to make sure Alicent’s children never challenge her for the throne. Alicent herself has realised that there’s evidence to prove Rhaenyra’s recent liaison but not with Daemon – though what she’ll do with the information isn’t immediately clear. Did she let slip to certain parties at the wedding… either way she stops Criston taking his own life, so he may be around for a while.

Next week, the events and time-span move forward, with the loss of two actors to older performers. At over the halfway mark, there’s still plenty of blood to be spilled…. 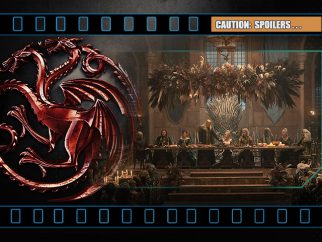