Cry me a Riverboat: Is Samantha Morton’s desperate Dee in denial..?

Before 'Alpha' there was 'Dee' but could the most dangerous thing about her be that's she's NOT paranoid?

On an old riverboat a group of survivors have managed to maintain their lives and a reasonably safe distance from the undead and other threats. Dee and her daughter Lydia have been picked up by the riverboat and are part of the crew where everyone has their job and part to play. But Dee has little time for the more relaxing moments, the yoga-classes and ballroom dances… all she sees is an isolated group in denial about the state of the new world. She’s winning few friends and managing to alienate her own daughter as she keeps her distance and eyes all the passengers with a suspicious eye.

But then people start to die, possibly by accident or possibly not… and some eyes turn in Dee’s direction. Is Dee a dangerous liability or their last hope… and. as things go from bad to worse, does Dee care about anyone other than her daughter?

The first two entries in The Walking Dead‘s anthology placeholder were fairly flippant affairs – both fun and interesting in their own right, palette-cleansers before the return of the main show in a couple of months. The third episode of Tales of the Walking Dead – entitled Dee – is anything but funny and perhaps speaks to the intent of having a show blueprinted to explore things that would prove too diversionary if part of the regular, episodic format.

This is also the first entry to feature a familiar face at its centre. Samantha Morton is quite a superb actor, one who has proven raw and fearless and difficult to pigeon-hole throughout her career. Her time as ‘Alpha’, the leader of the Whisperers in the main series produced one of the key memorable villains of the run, a broken figure made even more dangerous by trauma  – but whose ruthless demeanour and actions spoke to the pain she’d suffered and the road she’d taken beofre and after. You were simultaneously hoping for her demise because of her devastating actions yet still feeling an element of pity for her mental state. It would have been reasonable to think her story was done, ultimately killed by Negan and those in her thrall dead or scattered. But Tales of the Walking Dead takes the opportunity to go back to the character and highlight a time in her life just before she joined the Whisperers and became their leader.

Here she’s simply ‘Dee’, not quite yet the ‘Alpha’ she’ll become but already an outlier, a turbulent force of nature… an oncoming storm.  She and daughter Lydia have been rescued and are on a small riverboat that is mainly full of grateful if diffident people. Dee doesn’t fit in – she can appear meek and maladroit, she despises ‘dressing up’ and the others’ pretence that there isn’t a fundamental change in the world. She pivots to being proactively hard and brittle and always on her guard because, in her eyes, it’s the only thing that will keep her alive. But while one can certainly scoff at the likes of daily yoga-classes and dinner-parties and paint the other passengers as naïve and elitist, it’s also basic human nature to try and hold on to the familiar in desperately unfamiliar situations. Dee believes that the old world is done and the only way to survive the new is to challenge it face-on. But Dee’s attitude is hurting the relationship with Lydia and – rightly or wrongly – the riverboat’s default leader Brooke (Lauren Glazier) sees an opportunity to provide the warmer mother-figure aspects that the young girl is missing. Needless to say, that doesn’t lower the level of Dee’s simmering discontent or sheer animosity.

The pivot on the episode is that much as you might see Dee as paranoid, broken, her own worst enemy and the element most likely to bring fatal chaos to proceedings… she’s proven absolutely validated on most major points. The boat’s safety protocols aren’t good enough, recent ‘accidental’ deaths are not what they seem, there is a traitor in their midst and ultimately Brooke and the passengers are subverted from the inside, not by Dee but by the bartender she’s been accusing from the start. In other words, however bat-shit crazy you may be, you’re not paranoid if you’re actually right.

Morton slips back effortlessly into the role but there are other good performances. Given the timeline it’s necessary for Lydia to be played by a different, younger actor (Scarlett Blum rather than TWD‘s Cassady McClincy) which is a shame because it’s still something of a disconnect.  That being said, Blum is perfectly fine and emotes all the desperation and sadness needed and is the viewer’s entry into the fuller ramifications of Dee’s decisions. Lauren Glazier as Brooke is not some apocalypse-denier, merely someone who is trying to save people and retain a sense of community. Her ways are not unreasonable despite her lack of belief in Dee’s approach and her viewpoint. Lydia ultimately makes Dee spare Brooke, but she is left disfigured by the encounter and it’s this confrontation in particular that provides some more of the ruthless dots towards the Alpha persona. The appearance and the sound of the Whisperers reaching out to Dee, completes that transition.

After the comedy of previous weeks, this is a return to the nihilistic tone that sometimes overwhelms the main show, but anything that brings Morton back to the screen is welcome and the episode itself shows just how fragile and fractured people can be under pressure… 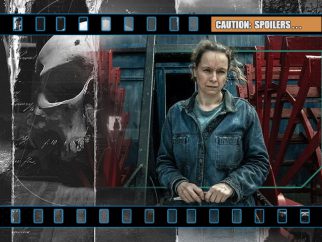 Continuance: ‘She-Hulk’ thriving on fun banter rather than story…

House of the Dragon: Dynasty and (Dis)Loyalty under Fire…