HBO’s ‘House’-Building: Have Westeros and its Dragons still got Game?

Playing 'Games' or playing 'House'? The anticipated GOT prequel has familiar familial pieces, but will it soar or burn?

It is the ninth year of King Viserys I Targaryen’s reign, 172 years before the death of the ‘mad king’ Aerys and the birth of his daughter, Princess Daenerys Targaryen… and the land of Westeros finds itself in a time of turbulence as the succession to the Iron Throne – and all the power that entails – is challenged. There are those who claim the position through lineage, others through the pragmatic needs of its citizens and those who are thrust towards it by no desire of their own.

But, equally, there are those more than happy to kill for their opportunity to hold sway over the land and alliances will be sought and offered in a battle that will affect and define the lands for centuries to come…

It is a time of great turbulence… not only in Westeros but at HBO. However, the recent restructuring  and bloodbath of cost-cutting at parent company Warner Bros./Discovery, seems not to have reached this much-anticipated return to the world of Game of Thrones. Whenever there’s a sequel to a beloved project, all eyes will be on the result and House of the Dragon has to walk and fly that careful line between attracting all the viewers who loved GOT (and were willing to forgive its luke-warm ending) but without simply adhering to such a familiar template that it seems like merely a retroactive retread. Such a dilemma is particularly on show in a premiere episode, The Heirs of the Dragon, the need to do some world-building (this may be Westeros, but it’s close to two hundred years before the events of the original series) and bring on a new ensemble of characters and opposing forces.  Based on George R.R. Martin’s own prequel Fire & Blood tome, we have an existing road-map for events if you choose to do your homework, but it’s the new scenery and the pacing that form the enigmatic journey.

Milly Alcock plays the young Rhaenyra Targaryen – our latest heroine for whom spell-check and vowel-heavy Scrabble boards will be invented – and gives the princess something of an ethereal air in the opener, making her a reactive character to events and thus makes it a bit hard to see if she’ll have the same specific gravity and impact as her descendant Daenerys Targaryen. Emma D’Arcy takes over the role as the girl becomes a woman of importance and strategy.

Ex-Doctor Who Matt Smith is the aptly named Daemon Targaryen who dispenses with any memory of the amiable Time Lord and quickly demonstrates how to be a complete bastard: conspiring to hold on to his proposed inheritance, being willing to massacre and maim the poor, acting beyond ruthless in the jousting tournament (aiming for the horse!), whoring his way through orgies (or attempting to  – it appears he performs better on the battlefield) and making it very clear that no-one should stand in the way of his aspirations. Yet he also has a certain swagger that makes him somewhat catnip to the family who try to tolerate his behaviour because he’s of the same blood. But only for so long… especially when a tragedy makes it clear his loyalties are his own.

Paddy Considine is King Viserys, a man trying to be a good monarch but often finding himself caught between impossible decisions and then perceived as weak as those around him out-maneuver him. His dreams of a male heir to his Iron Throne are tragically short-lived and given his own ailments and enemies he seems the prime candidate to be removed from the board by fair means or foul (likely the latter) in the coming episodes. Rhys Ifans and his Otto Hightower also holds significant sway, trying to be the voice of pragmatic reason – which leads one to suspect hell have to watch his back.  The ever-reliable Graham McTavish makes his Ser Harrold Westerling a good sounding-board for several characters Fabian Frankel as Sir Criston Cole looks like he’s being set up to be a leading man, but the fickle Westeros play-sheet could easily see him as a casualty when he temporarily bests Daemon in combat. Olivia Cooke’s Alicent Hightower (initially played by Emily Carey) looks to be a supportive presence as the young Rhaenyra’s confidant and maid, but may also find herself as a pawn used by others in their power-struggle. It’s hard to get a full read on Lord Corlys Velaryon (Steve Toussaint) and Eve Best’s Princess Rhaenys Velaryonwho both feel cheated out of power but maintain much of their own counsel. Elsewhere, significant names such as Bill Paterson, David Horovitch and Gavin Spokes sit on, looking fretful.

The screen punctuates events and book-ends proceedings with images of soaring, imposing dragons, though as yet they aren’t as common throughout The Heirs of the Dragon as their inclusion in the show’s title and episodic entry might suggest – they are more an occasional symbol of power rather than a heavy presence. So far, all the needed ingredients are on show and the gameplay is interesting enough – a medieval-esque romp with the background elements (tall towers, maze-like cities, fiery dragons and simmering looks) and the foreground re-establishing this previous generation’s fractured hierarchy. As expected, there’s plenty of blood-spilling (a savage jousting contest, a gory c-section), nudity and some choice genealogical profanity. But the original Game of Thrones succeeded on both the strength of its dangerous dynamics and, in particular, the characters that we could root for (and against). The HOTD opener provides the new line-up, but it may be some time before we know if we’ll have the same high degree of familial angst and combative cliques that will generate viewer loyalty and favourites to quite the same extent, keeping us coming back week after week in the longer term.

That said, this opening gambit will likely act as something of a welcome palette-cleanser to those who felt let down by the end of Game of Thrones and given that the premiere episode apparently crashed the HBO platform, it’s likely that ‘here be dragons…’ for the foreseeable future… 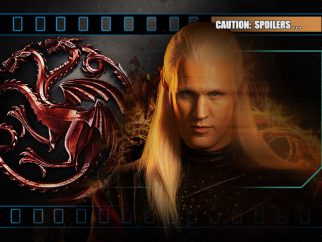 TWD, WTF? Latest anthology ‘Tale’ is a Groundhog Day of the Dead…