How Green is my Uncanny Valley? Disney’s latest brings a sassy She-Hulk…

Orphan Black is the New Green... but does Tatiana Maslany measure up in Disney+/Marvel's first 'comedy' drama..?

Jen Walters and her cousin Bruce Banner are driving along a country road when an unexpected close encounter causes them to veer off the road and crash. Banner is in his human form and is momentarily injured, a cut allowing blood to pass from his own body to that of Jen. Taking her to a Mexican retreat that serves as bar and bolt-hole (created by Bruce and Tony Stark as a getaway) , Bruce realises that Jen has inherited some of his Hulk abilities.

Far from having a dual-personality problem, Jen seems far more in control of her new powers, though she still has to get the hang of transformations, but will she be able to hone her new appearance and powers and still fulfil her job as an attorney?

Though there are various distinct formulas at work and ways to categorise them, each of Marvel‘s Disney+ shows to date has tried something a little different. That’s certainly true of She-Hulk: Attorney at Large which debuted Thursday on the platform which feels like (and is marketed as) Ally McBeal meets the Avengers.

If you’re familiar with the character already, then you’ll know some of the story-beats and, tonally, the new show fits into the existing Marvel mythology pretty well, though there are tweaks. The character was introduced in 1980 and the late Stan Lee had admitted it was generally seen as a copyright maneuver to keep the name/concept of a female counterpart to Bruce Banner.  The story was that Jennifer Walters, Banner’s cousin and an up-and-coming lawyer, was gravely injured when she was shot and wounded by the villainous mobster Nicholas Trask, a recent target of her investigations. Bruce Banner is in town and as the cousins share very similar (but rare) blood type, he’s able to use his own blood to save her. However the transfusion also triggers Jen into turning into a female version of his infamous alter-ego. Eventually Jen’s more savage persona is calmed and several stories on, Jen ultimately gets full control of her new abilities and retains her own personality. The most famous run was in the late 80s/early 90s when writer/artist John Byrne took over the character with a confident and sassy ‘Sensational She-Hulk‘ title being used to have fun with existing comic tropes and with the character of Jen frequently breaking the ‘fourth-wall’ and talking directly to the readers. Though used sparingly in the pilot (more of a book-ending narration and a double-take comedic moment), it’s clear that the ‘fun’ tone of the Byrne years is very much the template of the new show.

It’s also the first of Marvel‘s modern output to come in at a deliberate, regular 30-35 minute mark, with most of the previous series having episodes that fit more comfortably into the traditional 44 minute template (what would amount to a network show’s hour-allocation with commercials). Given its running time, pilot sprints along in brisk form, largely setting up all the origin story, Jen’s role as a lawyer, her lack of desire to lead any kind of superhero life and the frenemy rivalry she has with her colour-coordinated cousin. In the TV version, there’s no assassination attempt, but the cousins do veer off the road to avoid a low-flying space-ship (as you do) and are involved in a major car-crash. Banner and Walters’ blood mixes giving her the Hulk abilities and emerald hue and then Bruce trains her in her new powers (and responsibilities). Unlike Bruce, who had to battle through the years to achieve a balance between both sides of his personality, Jen’s transformation (bar a one-off unfortunate run-in with some drunk dive-bar customers) is more controlled – triggered by extreme emotions such as anger, frustration or Bruce setting off an air-horn before she’s awake. Otherwise, ‘She-Hulk’ (a name she instantly hates) is just an enhanced version of Jen – bigger, taller, faster, stronger… and, perhaps sexier. Much to Bruce’s frustration, his cousin also seems to learn the ropes far faster and before long she’s out-throwing, out-punching and out-yoga-ing him, even if she doesn’t have a firm grasp of how the big changes will impact her life.

The big-screen Hulk, especially in the modern MCU movies of the last decade, has been a solid CGI-rendered character, brought to life by very talented VFX artists and Ruffalo’s full-immersion into performance-capture tech. However early footage of She-Hulk, teased earlier in the year, gave some fans cause for concern. Tatiana Masalay might essay Jen Walters, but the She-Hulk persona looked like it still needed some work around the edges and the ‘uncanny valley’ aspect (the phenomena associated with the inability to fully create an up-close, good-as-reality CGI creation that would fool the viewer  – often referenced in the way early CGI created almost ‘dead’ eyes in its characters) still looked to be an important obstacle. Several months on and the result is not perfect, but probably far better than some had feared.

Like Ruffalo before her, Maslany (best known for her roles in the acclaimed Orphan Black and her supporting role in the prequel Perry Mason series) has a recognisable appearance that shows through her enhanced, green-hued features, all enough to be a fun character and not just a walking-talking visual effect. The fully-human form is a familiar, everyday mix of harried, self-aware clumsiness and drive for the audience to like her for who she is in her ‘day job’. Ruffalo may be a supporting player here, but he’s clearly enjoying himself and some of the more ‘exposition’ dialogue at least has purpose for continuity (like explaining the mending of his broken arm from Avengers: Endgame).

The series, with Rick and Morty‘s Jessica Gao as the creator and head writer, clearly sets out to be fun and the half-hour length might ultimately work in its favour – given that many of the previous Marvel/Disney+ offerings often found themselves stretching their stories to fit. We can expect a lot of cameos, pop-culture references and easter-eggs along the way and long time fan boys/girls will likely enjoy it as much as recent converts to the MCU. Yes, there’s something of a Deadpool motif in the way she breaks that fourth-wall (though, as we’ve noted, the source material predates the Merc with a Mouth) and which will likely be a marmite element for viewers, but initially it’s a device used sparingly, though we know there’s a lot more of that to come. Kids may well enjoy a lot of what’s on offer… though make no mistake, there’s enough banter and inference to see it’s clearly pitched at an older, more knowing audience… and a running-joke about Steve Rogers virginity gets a carefully clipped punchline pay-off in the mid-credits scene.

Quibbles? The space-ship that sets things in motion is identified by Bruce as having the look of a vessel from Sakaar (which you’ll remember is the trash planet the Hulk escaped from during Thor: Ragnarok). It would seem an immediate big.story.point. and may well be an element we’ll get back to, but after it causes them to crash it barely gets referred to again, which feels odd. Jen’s initial ‘hulk-out’ outside the bar may be there to show her being initially ‘savage’, but it’s a little peculiar that Walters doesn’t immediately go to the bar for actual help, especially as she’s just been in a car-crash.

There will be those newcomers that look at the female-counterpart concept and immediately hate or dismiss She-Hulk and this new approach and tone to the MCU pantheon…  but if so, they’ll be missing out on an emerald gem. That being said, the show is going to have to work hard to maintain its delicate balance between requisite action and self-aware parody. But based on its opener – entitled A Normal Amount of Rage – and glimpses of what’s to come in the season trailer, there’s likely enough here to defend rather than prosecute and when the verdict is in, it will likely become a weekly guilty pleasure… 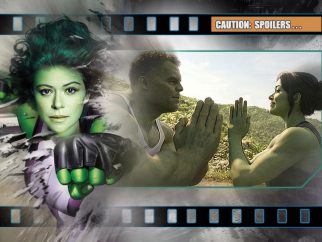