Me, Myselves and I: Westworld explores its higher ‘Fidelity’…

Waking bad, Caleb is beside himself when he learns Frankie is still alive and he needs to find a way to escape...

Caleb, or at least the latest version of him, awakens for another interrogation from Charlotte Hale who says she wants to know what makes he and his bloodline somehow less susceptible to her nanobot bugs that are controlling a majority of human beings. But Caleb wouldn’t give her the answers even if he knew them. When he learns that his daughter Frankie is likely still alive, he feels desperate to get word to her – especially as Hale is boasting that she is already working to find Frankie and experiment on her.

But how can Caleb escape a facility where he apparently ‘died’ so many times before. Perhaps previous versions, coming to the end of their lifespans can provide insight?

And meanwhile Frankie has even more immediate concerns of her own. She may not trust Bernard and Stubbs as they attempt to revive Maeve, but can she trust her own people when one may have been replaced on the last mission?

There have been plenty of comparisons between the world and style of Westworld and that of the works of Christopher Nolan. That’s not that surprising given that it’s Nolan’s brother Jonathan that is one of the showrunners and both men have often leaned into tales featuring both spectacle, technology and perception. But while it might be tempting to think that it’s movies like Inception (with its virtual reality / lucid dreaming motif) might be the obvious touchstone, this week’s entry (‘Fidelity‘) has more in common with the likes of Christopher Nolan’s The Prestige. Graft on a take that also echoes Duncan Jones’  Moon and the result is something that Westworld does well – messes with your mind and those of its characters and comparing the choices they did make, are making and may yet make.

This instalment is definitely an Aaron Paul showcase, the actor pulling out all the stops and deconstructing the primal instinct to survive and escape that permeates through not just one incarnation but many. With the kind of tale that likely required a whiteboard and several miles of string and sticky-notes in the writers’ room, we follow a ‘Caleb’ as he is first tormented by Charlotte Hale and then finds a possible way to circumvent her plans for him. That comes when he accepts that he’s one of many Calebs from which Hale has tried to extract information, killing each version when it disappoints or won’t cleave to her wishes. But a vital mistake seems to have been made in leaving any version to compare notes with another… a recent, previous Caleb – about to expire but just holding on long enough – is able to point our primary Caleb towards an unlikely means of escape and as we follow our Caleb as he encounters other inert, less-fortunate versions who made it that far and each managing to leave subtle clues as to where their follower should try (or not try) next. Despite the necessary need for split-screen CGI when two Calebs converse – with Paul bringing each of them a world-weary humanity – it’s also worthy of note that the real power in certain scenes comes from Caleb simply realising how much the previous versions have sacrificed to get him here… and perhaps wondering if he himself just another piece of the ladder for someone to follow again later.

Frankie’s journey may be miles away but it’s interconnected. She’s worked out that both Bernard and Stubbs are Hosts and naturally doesn’t feel inclined to believe them given the chance of abject betrayal at any moment. But she’s also aware that Bernard’s efforts to revive Maeve are the cornerstone of finding out what really happened to her father and when it becomes clear that there might also be a traitor in the rebel ranks, she has to play a dangerous game of brinkmanship to test those around her. Bernard, again doing his best Doctor Strange multiverse-multitasking, isn’t that much help, stating in his experience that there are times when the traitor is one person or another, each leading to different outcomes… which makes him interesting but as useful as a Magic Eight-Ball in the wider decision-making process.

Daniel Wu also makes an impression in the episode. For anyone wanting more action – in what can sometimes be a compelling but ponderous and cerebral series in pacing – he gets some good scenes. Casting Wu and not doing something with him would have been a waste of his talents, but the episode creates a backstory and fate that feels like a well book-ended character entry and with Westworld we’ve definitely learned that there’s never a fully closed door to a familiar face’s return.

Ultimately, Fidelity‘s core message is one about identity – not just asking if other people are who they appear to be, but a more philosophical bent on whether one can trust themselves and the nature of freewill. The version of Caleb we follow seems to perish again, though getting far further than his predecessors. That Hale has been playing him to a degree and can merely kickstart the cycle again would say it’s a hollow victory for him, but the fact that Caleb continued to defy her and managed to send out a message to Frankie that didn’t help Hale suggests a win for the ‘good’ guys… especially as it is ultimately received by his daughter at precisely the moment it can save her life (with a little assist from Maeve).  What that means for Caleb isn’t clear, but with a Host body being seemingly created, we definitely haven’t seen the last of Aaron Paul either… 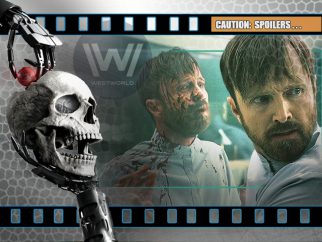 Bat’s all folks? ‘Batgirl’ completed but shelved from schedules…