The Greater Good? Why Evil’s first ‘Cult’ is the deepest…

In an episode that's playing to the series' strengths, we discover that you don't always get what you want/need...

David, Kristen and Ben are called to assess a man who has been snatched away from a cult and is now undergoing ‘deprogramming’. The problem is that he now seems to be possessed by something else. Deciding to investigate the cult to which he belonged, the team are not met with darkness and suspicion, but open-arms and a peaceful attitude – so what is the truth?

Meanwhile David is asked to help spy on Kristen’s young daughter Lexis, all on behalf of the Vatican’s larger plan and Kurt is given something to help his writing by an all-too-eager Leland.

This is one of those episodes that feels like it’s moving bigger story elements along rather actually than having a great individual story of the week – but it’s still a sure-footed step along the way for the, well… cult show.

Paramount+‘s Evilcontinues to be insightful in all its subject-matters, never going straight for the predictable and always knowing when to be overt and when to nuance. It seduces and entices but it’s never less than smart in its observations of human nature – good and bad. Despite the mix-and-match aspect of the plot elements this week, it’s an episode – The Demon of Cults – that pulls together almost all the series’ strengths and long-ongoing arcs, giving connective tissue and momentum if not any firm resolutions. It understands exactly why cults and muses (and perhaps wholesale religions) are attractive to so many people (in a way that appears helpful at first but can quickly become harmful and addictive if power-plays are involved) and how they fill a void, but it also plays with our own prejudices to such along the way. The cult that the team are investigating, initially perceived as evil and destructive by us because of the exorcism trying to ‘cure’ someone from its influence, proves to be bizarre but not as malevolent as we’d think. Elsewhere Leland’s manipulation of Psychiatrist Kurt (Kurt Fuller), in ‘helping’ find his muse, may be clearly unhealthy but it’s easy to see how Kurt gets sucked in when he finds himself being far more productive and empowered.

Ben’s visit to a religious open-day starts with his rather thinly-veiled skepticism and some surprise when he spots one of the ‘Super Secret Science League’ group who he presumes is there to also pour scorn on proceedings. It turns out first that she’s a willing participant and scolds Ben for not trying to balance science and spiritualism – after all, she poses, aren’t love and quantum-entanglement both about distant and distinct things finding hard-to-define interlocking power? Ben is impressed with her theories and her flirtation which leads to some after-supper ‘quantum entangling’ of their own, but when it turns out she’s actually the leader of the group and perhaps even identifying as a Jesus figure talking about the need for sacrifice while waving around a scythe and talking of blood-letting… things are obviously getting interesting and a little scary.

BUT, just as we expect things to be getting deadly and demonic… after all Ben just wandered out to meet David and Kristen and he was covered in blood… it turns out it’s only goat’s blood and Ben has been the centre of what appears to be a bizarre but relatively harmless (unless you’re a goat) cult initiation. He reacts with a resigned, dazed smile and a  ‘Religion… it be crazy!‘ attitude.

David reacts as we’d hoped when asked to place a spy-camera in the room of Kristen’s daughter (who you will remember was conceived with help from the RSM Fertility, an institution we now know to have an infernal connection with its DNA-practises)… he refuses. Vatican fixer Victor LeConte (Bryan d’Arcy) and the members of the holy ‘Entity’ group are less than impressed with his attitude, but he makes it clear that assisting them that far would be a betrayal of his friends, particularly Kristen. When she gatecrashes a later meeting between David and LeConte, the priests surprisingly don’t try and deceive her. Victor explains David’s loyalty to her, but also outlines the pragmatic approach of keeping Lexis safe. The episode asks and gives a potential answer – partly – to one of its core questions. Just why is Leland so specifically targeting Kristen? According to LeConte he’s not – he’s after Lexis, grooming her to become an important part of that sigil map of profane power. What’s a mother to do?

We’re left wondering if Lexis is an unknowing pawn and innocent as she appears. She manages to ‘kill’ everyone at the dinner-table during the game and that slight wink is certainly sly (plus, of course, there were those S2 episodes when she appeared almost reptilian – was that imaginary or not?). As always, the show isn’t playing all its cards, just giving you a flash of some aces.

We’ll have to wait and see, but some of the show’s deeper-sown seeds are starting to germinate. 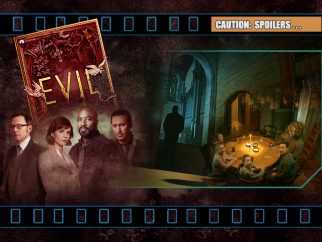 Connolly’s latest tales are Strange and full of Fury…