George’s day is going well… he’s living the dream with partner Sarah and looks like he’s about to get the investors he needs to start his new disaster-mapping app. The next few months whizz by with other great successes, the only blip being another pandemic that’s slowly catching the public’s apathetic attention… too late to realise its apocalyptic outcome.

And then… George finds himself back on that fateful ‘app’ day and, with memories of what might be about to happen to the world, things don’t go anywhere near as well. It turns out that George has a mutated gene that makes him more and more sensitive to changes in the time-line, last-minute saves by the mysterious Lazarus Project who have a remit to undo world-ending disasters. They recognise his rare organic gift and decide to recruit him to the team.

But is saving the world the most important thing when such a mission can still come at a devastating cost?

There’s some obvious and inevitable irony in watching a time-travel drama and experiencing a sense of deja-vu. Been there, redoing that – if you will. Truth be told, it would be impossible to make any new entry in this particular part of the sf genre without audiences musing on some similarities to something in the past. And there are many, many  routes to take (have taken? will take?) and assorted rules to a chronologically challenged tale: Think everything from Back to the Future, Quantum Leap, Groundhog Day, Terminator, Predestination, Source Code, The Edge of Extinction, Doctor Who, Avengers: Endgame… whether approached with a tilt towards humour, tragedy, action or high-brow, brow-furrowing deep thought, the rules, the contradictions and the paradoxes are enough to make your head spin and ache. So the more basic truth of time-travel drama is perhaps not to think about trying to reinvent the wheel (or prevent it being invented), but to make sure whatever wheel you spin is shiny, smooth and hits the road with satisfying momentum.

From the outset, The Lazarus Project does that very well, possibly because once its premise is established, it’s less concerned with the mechanics than the consequences. Probably having more in common with 90s’ series 7 Days (sharing remit of a top-secret project tasked with regularly preventing Earth-shattering events by going back and changing history before they occur) and the more recent Timeless (in which the characters have a vested personal interest in reversing events that have taken a toll on their lives), The Lazarus Project first grounds us in everyday reality and then seeks to whisks us away… from suburban bliss and success to high-speed chases (worthy of the big screen) and tragedy.

Floats like a butterfly-effect but stings like a wasp… In the same way that ‘Ultraviolet ‘  revolutionised and modernised a classic tale of contemporary vampires in the late 90s, ‘The Lazarus Project ‘ takes on time-travel with equally sharp, dark insight and wit.  It’s like Christopher Nolan’s ‘Tenet ‘  but with far more heart and soul and likely to hold your attention far longer…

What could have been a very formula, procedural show instead gives us the necessary dilemmas within the first and second episode and then immediately builds with a growing darkness.  Yes, this is a genre show with a time-bending theme, but it’s also a complex jigsaw of actions, reactions and motivations. Just when you think there’s a trope involved, it’s somewhat subverted, the various character story-arcs bend and fold into themselves and each other throughout the run, later episodes often giving huge context to earlier, throwaway lines. And amid some arch smartly-delivered punchlines, there’s also some blows to knock you down emotionally. In one case a character undergoes a vicious cycle of becoming pregnant and giving birth only to repeatedly lose that baby during the resets (The scenes with Vinette Robinson – who memorably played Rosa Parks in Doctor Who –  are truly devastating), in another piece of the tapestry another romantic pairing faces another brutal outcome.

Paapa Essiedu gives his befuddled app-designer turned agent George a very human side, even when some of his actions become questionable. George has all the hopes and dreams of the average guy, the determination to be a success and a solid, passionate relationship with his partner Sarah (Charly Clive) and we’re quickly invested in the couple. We share his confusion, frustration and then unravelling fear when the fantastic six months they’ve had (his app picked up by an investor, marriage to Sarah and their pregnancy) hits trouble, first with them falling ill to a global pandemic and then George finding himself time-shifted back before all his good and bad fortune… and things NOT going so well when his behaviour and ‘memories’ drive a wedge between him and Sarah in this new timeline. Fantastical elements aside, it plays to a very real and primal fear that most feel at some point: that our current triumphs are temporary and that we’re always a heartbeat away from losing everything that’s important -the more you have, the more you have to lose. George’s second shift restores some of his losses and gives him an understanding of what’s going on and he ultimately handles this fundamental shift in his understanding of life, the universe and everything far smoother than some of us might. Once the rules are explained to him (and us), his initial contribution is still more of a slightly-bemused IT researcher and it’s, literally, a turn-it-off-turn-it-on-again approach to survival… it’s just the consequences that have become higher. But the discovery of the toll the job can have, is what gives the series its edge. If the rules are that you can and must save the world entire but can’t and mustn’t save the people closer to you if it interferes with the outcome, how long before those scales seem unfair? It’s all a matter of seeing a changing perspective in an ever-changing timeline.

The rest of the cast are the requisite misfits given life beyond their templates by the actors. Charly Clive’s Sarah is your perfect tv girlfriend, sexy and strong and yet quirky and sympathetic – to a point. Vigil and Bodyguard’s Anjli Mohindra is Archie, the slick and sardonic recruiter, Caroline Quentin is (Wes/Ma’am!) the boss who can take in whole swathes of screens and information and who doesn’t let the weight of the world get in the way of formal office etiquette; Rudi Dharmalingam’s Shiv is the sullen and somewhat tormented part of the team. The villain of the piece seems to be Tom Burke as Rebrov, but even he has some understandable frustrations and reasoning. The whole series paints a picture and then gives each layer and character their own brushstrokes.

Created by Joe Barton, the show feels  contemporary in attitude and remit – not only because a pandemic problem frames the opener and the mid-European conflicts that became so topical that edits had to be made in post-production, but also because it doesn’t fall into the trap of needing to dress its scenery for different eras as the drama can only leap back the maximum of a year (take that, Sam Beckett) and when Archie’s asked about going back further, say a century or two, she notes it’s not only impossible, but: “I’m a brown woman, why the fuck would I want to?” Arguably, pacing is ultimately a problem, with the momentum and tightness of story faltering in the latter half.  George’s initial recruitment and the explanation over the Project’s remit come across as a little too fast-paced exposition, but it’s essentially setting the scene for the dilemma that will then drive the series. His later sojourns across Europe in search of the Big Boy missile paint a more hapless tone and stretch things out… and the season could have been tighter with possibly one chapter less in its eight-episode run. The finale itself is fast and furious and the ending will have you screaming for some kind of continuation. (SKY haven’t green-lighted a second run, but they’d be crazy not to on the strength of this run)

So, yes, you’ve seen many of these ingredients before and sometimes mixed in not dissimilar ways. But even after the first hour of The Lazarus Project you’re likely to be more invested in this than in many other iterations. In the same way that Ultraviolet revolutionised and modernised a classic tale of contemporary vampires in the late 90s, The Lazarus Project takes on time-travel with equally sharp, dark insight and wit.  It’s like Christopher Nolan’s Tenet but with far more heart and soul and likely to hold your attention far longer… and well worth spending your time with…

Given the subject, tone and standard of writing and acting – not to mention the use of budget and location work –  this is a show that floats like a butterfly-effect but stings like a wasp and one hopes that Lazarus will get to rise again… 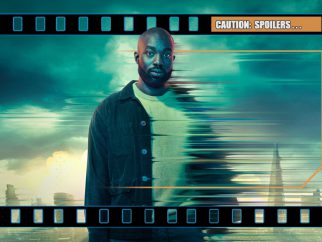