'Children of the Comet' allows the formal and informal strengths of the new Trek show to resonate...

The Enterprise is in the Persephone system, observing a M Class planet called Deleb. A comet that would normally pass by the planet now appears to be on a collision course.  The scavenger/nomadic society on the surface below look to the heavens, but have no idea the fate that may await them in a matter of hours. Given they are a pre-warp society in which the crew must not interfere – and far too scattered to mount an effective rescue if they did – Pike and his crew look for answers to avoid a cosmic catastrophe. They decide they may be able to use the Enterprise’s weapons to alter the trajectory of the comet.

However, it proves far more difficult than they anticipated – especially when the comet takes counter-measures and another alien race claims its path is pre-ordained…

The latest incarnation of Star Trek doesn’t reinvent the wheel or warp-drive, but it does know how to keep the mission on course. Yes, if you feel so inclined there’s plenty to nitpick in a story that feels like TOS‘s problem-of-the-week mixed with the latest VFX scope, but part of that familiarity and format works in the show’s favour. If the series is going to manage the nostalgia well, it’s going to have to echo that style while giving it a newer edge. In many ways, that’s the simple mission statement.

And there’s an innate sense of fun here, even with the touches of melancholy. Anson Mount and his unfeasible hair absolutely nail the irreverence that brings both the sheer joy and pathos to the heart of this new incarnation. And it’s impossible not to like him as the anchor for the show.

Yes, the ‘get-to-know-you’ dinner-party scene that Uhura (Celia Rose Gooding) attends is precisely that, the audience‘s first opportunity to see many of the ensemble react away from their stations and in a more relaxed capacity. It’s likely that Pike would have a passing knowledge of the people under his command, but he has a tradition of engaging them about their hopes and dreams – and he seems genuinely intrigued with the specific choices that led Uhura to the Enterprise. She admits that despite her incredible language skills and high-scoring academy-training which is all on the record – it wasn’t out of a sense of pure commitment to Star Fleet per se (perhaps, Spock notes, not the wisest admission from a level-entry crew-member who has just beaten others to a much-sought-after position). But she reveals that it was  a love of language and her desire to explore that led her here and Pike notes that being where you feel you can do the most good is important. Of course, Uhura is right where she needs to be to make the life or death difference in this week’s problem and that’s likely to be a motif as we cycle through the main players each getting their turn in the spotlight. But it’s a good place to start given that Nichelle Nicholls’ original incarnation was beloved but not always the best developed in a show built most around Kirk, Spock and Bones.

The gathering leads to a key moment when his own ‘Where do you want to be ten years from now?‘ question hits Pike him in a personal manner. He – and we – know that the future will see him horribly injured and incapacitated a decade hence, which as he notes to Rebecca Romijin’s Number One, robs life of a certain mystery. The show is going to need to find a balance with that… in these early episodes it’s key to remind us that the often jovial and sardonic Pike is also carrying a deep burden of foreknowledge, but it probably shouldn’t be a requisite weekly thing, more of a touchstone.

Jess Bush as Nurse Christine Chapelflirts gently with Spock and Bush could definitely be one to watch (next week’s episode swill see her front and centre). Bruce Horak, who plays Hemmer, also gets a good scene, introducing us more informally to the visually-impaired Aenar who is Head of Engineering. Horak himself is visually-impaired (the production were definitely looking for an actor with experience of the situation) and the scene plays out well – Horak telling Uhura that though he can’t see in the traditional sense, he still has finely-tuned other senses that make up for it. Given that he’s finely-cutting carrots for a meal and catches one of the vegetables Spock throws demonstrates his abilities and it all feels fun and interesting ‘observation’ of his condition rather than preachy.

The conclusion of the episode and its central problem is a little convoluted. The harmonic solution and key to the alien craft/comet’s language is something of a Close Encounters like trope, though decently paced through the episode as a way for Uhura to find her way (Discovery would likely have played out the dilemma in one brief scene or take a whole season, but it’s neither instantly solved or drawn out too long – just enough to fill most of the episode), but by the end it’s all mixed together with a climax more about foreknowledge and a handwavery mystical aspect that seems unconnected to music. It would have made more sense to tie the music into the endgame solution rather than have Spock take on a solo-mission save merely because Uhura had given him a window of opportunity.

It’s a case of so far, so good on the series. The format may sometimes feel safe but the show doesn’t feel boring and the return to a main ‘story-of-the-week’ aspect may be more ‘neat’ but could be a welcome chnage of pace given the badly-paced, sprawling one-story-seasons we’ve been seeing elsewhere. 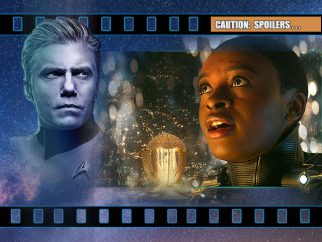 New Who… Old Who? Tennant and Tate are back…