Allied Forces? Maggie decides if she wants to be part of ‘The Lucky Ones’…

The Commonwealth offer an opportunity that's hard to refuse. But what happens if Maggie does?

As Eugene tries to work out his feelings in the wake of the cruel deception played on him, we see recent event’s from Max’s perspective.  At the same time, Lance Hornsby takes Commonwealth President Pamela Milton out to see the people of Hillside, Alexandria and Oceanside, pushing his idea that ringing them into the fold will help everyone.

But when Maggie seems reluctant to join the fold, she creates frustration both in her own camp and in the Commonwealth’s ‘outreach’.  And Lance Hornsby is not a man who deals well with frustration…

Last week was a hard one for Eugene (Josh McDermitt) and rather than completely changing gears for the new episode, we do get to see some of the repercussions and more details. We heard at the end of last week’s entry that it was Max who had been talking to Eugene, not the faux-Stephanic. We first see some of the events from Max’s perspective – previous scenes playing out from her point-of-view: her side of various radio conversations (in the original episodes we only saw Eugene) and also her reaction when Eugene arrived and she went un-noticed and he and the faux-Stephanie got closer.

We can see it was difficult for Max (Margot Bingham), though it’s never quite explained how the Commonwealth powers-that-be pulled off the deception quite so successfully. By all accounts, Max was never identified as the ‘rogue element’ that was broadcasting, though the city became aware of the transmissions (and must have heard some of them). Even so it stretches things a bit to think faux ‘Stephanie’ could have been completely convincing. Eugene later explains that he probably didn’t look as closely as he should have, overcome with actually having ‘met’ Stephanie and their supposed relationship flourishing. Towards the end of the episode the still bitter Eugene comes to apologise to Max for being blunt and off-hand with her after she tried to explain… but to be honest, that feels rather generous on his behalf. Though Max has also been hurt and is a victim in her own way, Eugene has every right to feel angry and betrayed and Max’s silence (to avoid detection and likely at the advice of her brother Mercer) did nothing to help Eugene as he was played out and preyed upon.

There’s some movement on the Eziekiel front with him finding that he’s moved to the front of the line for his medical procedure. He doesn’t like the fact that Carol has had to make a trade-off with Hornsby to get that, but both Carol and Jerry effectively lecture him that being alive is actually the most important thing. The main thrust of the episode, however, is Pamela Milton (Laila Robins) and her tour of Alexandria, Oceanside and the Hilltop – which was organised by Lance Hornsby (an ever more sinister Josh Hamilton) in the hopes of gaining more influence and power within the Commonwealth. It’s a little strange that the Commonwealth wasn’t more aware of the communities given that they don’t appear to be that far from Meridian but geography is also one of the casualties of the apocalypse (technically, a lot of the events of the last eleven seasons have relied on surprises and territorial claims but have still happened within immediate travelling distance of each other).

Alexandria could certainly do with some of the Commonwealth’s help given the recent storms and breaches in their walls – and an ill-timed ‘Walker’ entrance doesn’t do anything to belie that fact. Oceanside already has a strategic alliance with Hilltop and so says that while they’d be happy to work with Milton and the Commonwealth, they’ll align themselves according to the decision that Hilltop makes. Spending some one-on-one time with Milton, it looks like she and Maggie (Lauren Cohan) may come to a mutual respect and workable understanding. However we’ve already seen from the flash-forward that such an arrangement either didn’t happen or fell apart. It’s when Maggie sees the well-armed soldiers mowing down the walkers that it occurs to her that there’s an overtly military feel to these new ‘friends’ and the cost of allying with them might mean some uncomfortable choices to their own freedoms. She respectfully passes on a formal pact between Hilltop and the Commonwealth for the moment, much to the chagrin of Milton and Hornsby. It’s clear to see that decision will likely haunt all of them in some way, though it might still have been the right choice given what we know and don’t know about some of the Commonwealth’s activities.

This last season – albeit divided into three ‘runs’ of which this is in the second -really seems to be looking into the future. In the past seasons, the story has been about basic survival, but slowly we’ve shifted into the importance of picking the right alliances and we’re now into the idea of asking: ‘If an assemblance of civilisation  does come back, what exactly do we want it to look like?‘ The Commonwealth certainly looks like pre-apocalypse Americana with its clean clothes, swept-streets and apple-pie stores, but look closely and it also has all the politics and power-games of old, hiding them behind a veneer of civility. It’s that instinct, Maggie notes, that has largely served her well, though it won’t mean that people stop questioning her decisions… 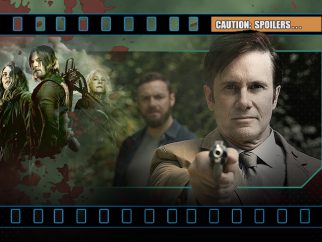 Harry Bosch continues his ‘Legacy’ on IMDb-TV in May…

Yes, we Khan. Ms. Marvel gets a trailer…