Discovery: All in all, a welcome return bets on traditional Trek…

After a month's break, 'Discovery' returns with a tighter, more compact episode with a familiar feel...

Book and Tarka have escaped with their prototype bomb and seem intent on detonating it against the anomaly that has destroyed so many systems, including Book’s own planet.  But as the Federation uncovers more information about the nature of the anomalies, Burnham is told not to pursue Book – instead to get more information on the possible location of the unknown species involved.

However Admiral Vance is ever the pragmatist and wonders if there’s a way for Burnham to do both… and so Burnham (along with Lt. Owosekun) head to a broker who might have something that the Federation and Book both want. But for either of the opposed forces to get what they need, it will be a contest to see who has the best poker face…

Often, when a series is separated into two parts, it’s clear that epic cliffhangers and climactic pacing have been part of the formula to keep fans watching. So while there were certainly some developments and tensions on show in the last Star Trek: Discovery episode (that we saw back at the end of December and in which Book and Tarka steal the bomb that Tarka’s created and leave Burnham in a very compromised political situation) and some adventure in this latest episode (broadcast this week), it’s fairly clear that the broadcast split was not originally part of the scheduling. The return outing, All In… was not a slam-dunk, all-hands-on-deck deal that you might expect coming back from a break, instead mostly focusing on Michael and crewmate Lt. Owosekun (Oyin Oladejo) tracking down Book… with Book and Tarka trying to avoid them and both doing their best to sway the decisions of the person/alien selling essential materials for Tarka’s bomb.

That lack of overt ‘dynamic forces’ in the new episode don’t mean it’s a bad one at all and, in fact, the episode and the show itself could likely do with these kind of outings  – entries that don’t automatically have sky-pumping hero moments and instead give good character interaction. Discovery handles matters of moral conscience and issues of diversity and identity more than any other Trek show (or, in some ways, any other mainstream show) and that’s an admirable remit, but it can be so on the nose that it fails to be entertaining. This week there’s no deep messaging, no high moral imperative or social commentary just a decent romp and story of people who don’t want to be in conflict having to be so… and it’s actually all the better for it. Given the amount of cosmic space battles, it’s nice that a lot of the scenes here are more contained and that the ‘battle’ is one played out over sleight-of-hand techniques, poker faces and sports-strategies. It gives us a chance to see more of Oladejo/Owosekun and her physical abilities, holding her own against opponents twice her size and also being a good sounding-board for Burnham. (It’s worth repeating that for an ensemble show, only die-hard fans can likely give you the names of the regular bridge-crew who have been there for four years and rarely have more than a handful of lines).

The more things change, the more they stay the same and the Karma Barge itself is Discovery‘s nod to Deep Space Nine‘s promenade mainstay Quark’s Bar, complete with a wiley proprietor – Broker Haz (Daniel Kash) – who also knows the value of Latinum – both as a commodity and a negotiating device. It was fun to see a reversal and have the owner be (just) on the right side of the law and the person responsible for stealing from the game-tables ultimately revealed as a Changeling. Truth be told, Broker Haz’s make-up and the compact and bijou ‘entertainment hub’ location seemed slightly more reminiscent of Angel‘s Caritas bar and its host, the equally-loquacious Lorne (played by the late Andy Hallet). It would be interesting to see Haz recur if the story allows.

There’s minimal time given over to other story-arcs though that timing belies the potential importance of what we learn about the research into the anomaly that’s threatening the galaxy. Stamets and Star Fleet uncover that the chemical reactions at the various sites of devastation are not as they should be and it leads them to believe that whatever is causing the events is probably doing so for the purpose of cosmic ‘mining’ and may have no idea of the consequences… thus making them less of a deliberate threat and more of a wayward interdimensional frakking force. But given the power that they obviously wield, the Federation sees it as evermore important that Book and Tarka’s pre-emptive bomb run against the perceived ‘enemy’ doesn’t happen… especially given the likely retaliation that would happen. There’s also a brief scene between Stamets and Hugh, talking about the latter’s feelings of inadequacy and though it’s good to see two characters (who just happen to be a same-sex couple) talking about very relatable, everyday feelings, it feels a little adrift, as if it should have been in another episode but was added here for running-time considerations.

This is a nice interlude that edges the story forward. It’s still not clear if the season has found its pentameter – it is a series prone to swing one way and then the other in its pacing and story-arcs – but this feels more like traditional Trek than the often whackamole approach to its ongoing mission statement. 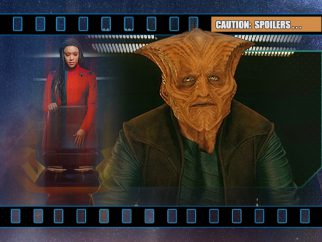