4400 – Rebooting a Race Against Time for a Time against Race?

The CW's reboot of 'The 4400' pivots on a similar displacing mystery but so far its lip-service concept is only skin-deep...

It’s 2005: Shanice is a young black woman at the start of a promising career in a law firm and having recovered from post-partum depression, her life seems to be going well. But on the journey into her first day at work, something happens. A flash of green light. A pull skyward and then….

It’s 2021: There’s another flash of light and Shanice lands in a Detroit park alongside thousands of other equally bewildered people. It’s such an ‘event’ that the police are quickly on the scene followed by Homeland Security, fearing that this is a protest that’s flown under their radar.  No-one seems to know how they got there, not even the people themselves, but it’s quickly established that there’s a disconnect with the knowledge they possess. It takes a little while, but the authorities begin to see that each ‘returnee’ is claiming to be from some point in the past, sometimes a few years, sometimes decades. They haven’t aged a single day and there’s no clue to the reason.

Many of the returnees are from minorities or  are social outliers… and they are about to get a sudden culture shock in how the world has changed. And how it hasn’t…

On paper 4400 would seem like a sure thing – a time-travel mystery equally able to examine changes in society over the years, but there’s so much askew in the opening episode of the ‘new’ The CW that it actually seems as if it’s embarrassed by the lip-serviced sf element and merely wants a finger-on-the-pulse socially-aware series with all the familiar tropes and tricks and the subtlety of a sledgehammer. The maguffin at the centre of the event is something displacing the characters in time – from various points in the past to the present – but apart from the sudden departure/arrival sequence (initially seen from the viewpoint of a whisked away lawyer), the actual mystery itself is discussed and pondered in walk-and-talks but barely examined in any meaningful way after the first five minutes.

While it’s great to see a primetime fantasy show fronted by a mainly black cast, one does wonder what the show is trying to say and, frankly,  if it can find a way to say it better. Racism is bad and pervasive? Of course it is. It sucks to be an outlier? Agreed!  If overtly tackling the change (or lack thereof) in race issues through the years is going to be the over-all theme of the reboot, that’s one thing (it’s a rich, pertinent seam to mine at the moment and the likes of Watchmen and Lovecraft Country did it in award-winning style and originality) but if it’s just one issue in the midst of many timeshift comparisons – which the wider pitch and concept would have suggested – then that specific racial emphasis of this premiere episode seems remarkably narrowly focused. Essentially, the pilot feels more like a show artificially playing primetime cultural catch-up to an already acknowledged cable/streaming shift.

The worthy message and the blunted execution feel constantly at odds. As the name suggests there are 4400 people that spontaneously appear in a Detroit park (the VFX pull-back barely stretched to 400 but that’s a minor point). The FBI, Homeland Security, the police, the government etc. ponder a range of explanations… from some sort of  weird, random protest, an arthouse hoax,  to something ooky, spooky or ‘extraterrestrial’ and all suggested in a rather casual, middle-management bullet-list, flowchart fashion.  But the logic-process offered on screen simply doesn’t work. If a large portion of the returnees are black (or culturally outsiders in past eras) which certainly seems to be the case so far, that would feel like an immediate pertinent point to recognise and talk about in the various scenes where the Powers that Be are stroking their metaphorical chins and trying to get a handle on events. Instead there’s a narrative gap and quite the opposite – it’s openly said that there’s no recognisable pattern to those who have returned (To either artificially ignore that blindingly obvious racial aspect or skew the pilot in a way that doesn’t represent the mysterious, broader scope of the show to come, does it no favours). Even after all that, one of the security officers at the hotel is so overtly confrontational and racist that it feels like messaging overkill.. plus ça change etc etc…

2004’s  original The 4400 was a cult hit, never blessed with high ratings but developing a healthy cult following and growing mythology (albeit left on a cliffhanger in 2007). Even putting the original show aside, we’ve seen so many of 4400‘s ‘hooks’ in recent memory that familiarity breeds boredom. NBC‘s current La Brea has diverse people plunged through a time-shift and one character with strange powers/possible answers links to the mystery. The same network’s Manifest (recently saved by Netflix) covered a similar idea with a group of airline passengers ‘returning’ having skipped five years with no immediate explanation and their attempts to both find answers to their event and also reintegrate into the world…. with a young boy having strange powers/possible answers links to the mystery. Add to the mix loved ones having moved on after years have passed and you’ll spot the themes.  In that latter case, the returnees were understandably  ‘housed’ in an isolated military facility by a suspicious government until they could return to the (sometimes soapy) lives…. here we see a section of the 4400 housed in… the ballroom of a rather expensive central hotel. I can’t have been the only viewer scratching my head and wondering why a government agency in crisis-mode was sweating the story leaking when such a strategically bad, insecure location had been chosen. Why pick locations in the heart of a city?  Can you even find 4400 spare rooms across the entire city with hot and cold running security – just how many hotels are being used/emptied?  Is it really so easy for someone in a hotel controlled by the authorities to simply head out the Fire Exit – perhaps so, if you only hire four guards?  Surely procedure would mean keeping each returnee separate until interviewed at least – using the hotel rooms that are rather obviously suggested at episode’s end? Fantasy is one thing, but when the internal logic starts to pull things apart in such a clunky manner, there’s an immediate problem and one that feels bigger than just filming under COVID restrictions.

Character-wise there’s some good performances even if the characters themselves are predictable.  Brittany Adebumola as lawyer Shanice is a complex character who suffered post-partum depression before being snatched away (though it’s interesting that the pilot’s A-story is from someone who’s been missing since the mid-Noughties – which for ancient relics like myself feels like yesterday – and thus doesn’t provide the most extreme difference). Ditto for Khailah Johnson as a mid-2000s reality star named LaDonna already addicted to cell-phones. Derrick A. King is Isaiah Johnson, a slick reverend from the ‘90s who establishes himself as something of a leader when relationships start to crumble between the ‘captive’ 4400 and the guards. Yes, I know that’s 30 years ago… shut up. Claudette (Jaye Ladymore) is a civil rights protestor plucked from Mississippi in the 1960s and it feels as if there’s greater depth to the unspoken parts of her story, wisely noting that some aspects of their treatment as women of colour are all too familiar (but she’s also the first person to note that there’s some added physical benefits to their return). TL Thompson plays a formal, softly-spoken WWI surgeon from Harlem named Andre who quickly realises how out-of-date he may be. On the mystery side, we also have a young girl from the 1960s named Mildred (played by Autumn Best) who seems to have some telekinetic powers and Amarr as the possibly mute Hayden, who seems to have unusually specific insight. (See those pesky time-travelling young people with special abilities get everywhere!)

Our modern-era protagonists are pragmatic Parole Officer Keisha Taylor (Ireon Roach)  whose girlfriend works for the Department of Homeland Security  (who’s brought her into the situation for a fresher perspective) and social worker Jharrel Mateo (Joseph David-Jones) who has a less formal and starched priorities and appreciates the emotional-implications of what the 4000 must be going through. It’s an adversarial partnership to start with though they partially bond over shared losses. It’s the kind of dynamic you can see the show playing with, giving them a push-and-pull situation that leads to them appreciating each other’s methods ™ every other week.

Ultimately, 4400 feels like an attempt to do something worthy within the template of a primetime show but unfortunately not having the script or deftness of touch to pull it off – yet. The further the dates it looks back to, the broader, more cliched and less effective it becomes. But there is some potential here if it can get past being a sledge-hammered ‘message’ show somewhat riding on current headlines and the opportunistic branding of the original show. But if it’s to survive, it needs something new to say rather than get time-trapped in tropes. 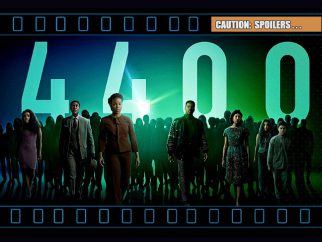 To Infinity and Before: Lightyear trailer creates hi-tech/nostalgic Buzz…