It's the end of the first third of The Walking Dead's last season and the perimeters are in peril...

As a horde of walkers, deliberately created as a diversion, start to surround Meridian and Pope’s enclave, Negan Maggie and Gabriel use the chaos as a diversion to find a way to enter the compound. But the Reapers have some tricks up their sleeves and Daryl begins to realise that his friends may be heading into a trap and a slaughter. The time has come for him to act, but will Pope’s apocalyptic methods push Leah to help Daryl or will she turn against him?

Back in Alexandria, the undead are also breaching barriers and with a heavy storm arriving, Alexandria is getting battered from all sides…

This finale season of The Walking Dead is being split into three runs and the ending of the first third comes in tonight’s chapter in which several factors come to a head.

This is quite an effective tale of two ‘families’ and the decisions that come with trust, betrayal and accountability. In short: after stalling and planning, this is the moment everyone has to pick sides.  For a character that initially felt like a one-off afterthought in the ‘bonus’ TWD episodes, Leah has actually become an intriguing character and it’s around her actions that the final part of this episode pivots.  Daryl, realising that his friends are about to be slaughtered by the better-armed ‘Reapers’, has to reveal his loyalties to Leah, pleading with her to turn away from Pope’s methods and she doesn’t take it well. Given that moments later Pope is about to slaughter his own men in an effort to get to the interlopers, Leah has a double-whammy and only seconds to make her decision. Yes, she helps Daryl take Pope down with some nifty knife-work (thankfully not making Pope a long-game threat like Alpha or The Governor) but then, seeing how ruthlessly Daryl then kills her own comrades-in-arms, it doesn’t make her feel any more warm and fuzzy towards him… deciding to alert her team that Daryl has betrayed them and giving him just enough time to possibly escape.  It’s quite a powerful statement that she’s silently making – that she won’t be part of  any needless death and killing, whatever its source and she won’t trade one family for another because their leader was crazy. And she has a point. As bad as the Reapers have become, they were also her family for longer than she was with Daryl and he’s also arguably done questionable, pre-emptive things to keep his own family alive. Our viewpoint as the audience roots for Daryl, but largely because of familiarity and loyalty rather than wholesale logic.

The other thread in this week’s episode sees a breach in Alexandria’s defenses as a storm rips through the area, tearing down parts of the wall around them. That leads to a horde getting dangerously close to the living accommodations and the Alexandrians having to put up makeshift barriers that are hardly up to the job.  Christian Serratos as Rosita Espinosa gets an absurdly fun moment that echoes some of Summer Glau’s ‘Last Stand’ moment from Serenity as she leaves the building to go fight a mass of zombies alone. Judith gets a lot of the focus and her helping the adults while looking after the kids perhaps highlights that the show is trying to work out where the character goes in this final season. Cailey Fleming does a great job as the character but after so long seeing Judith as a young girl who has had to grow up far too quickly, it’s odd when we’re reminded or her age and – like Judith herself – it can feel a little like a demotion or being too-protected after time protecting others. The climax sees her trapped in the basement as walkers over-run the house, though one suspects the already-injured Virgil will be the one to save the day, possibly at a mortal cost to himself (which would be some sort of synchronicity given that Michonne spared his life).

The episode ends on a moment that should spell certain death for a huge swathe of characters, but with a multitude of episodes still to go, one suspects that won’t be the case… (also AMC released a teaser for the next batch of episodes which somewhat diminishes the immediate questions of survival as plenty appear to be alive and well) but  we’ll see when the show returns in February. 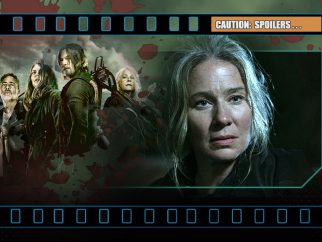