Who are you NOW? CBS gambles on old/new CSI hybrid…

Billed as both epilogue and sequel, CBS combines veterans and new faces as it revives CSI and heads back to Vegas...

Retired detective Jim Brass is in his own home when an intruder breaks in, intent on killing him. Brass, though nearly blind, defends himself and survives the attack, but an investigation as to who ordered the hit is initiated and the Vegas Crime Lab starts to go through the forensic evidence at the scene. Brass makes contact with retired CSI veteran Sarah Sidle and asks her to be involved in the case, trusting her skills and instincts.

The new CSI team welcome her experience and intuition, but the case becomes more complicated when a key suspect is revealed to have died several years previously.

The team always goes where the evidence leads them – and it’s about to lead them to a storage-locker… and an unusual set of contents that could have a dramatic, institutional effect on the Crime Lab.

It’s easy to be cynical about the wave of reboots and reinventions that have started to take up the schedules –  because, literally, coming this November, Nash Bridges: The Movie!’. On top of that franchise titles such as the four ‘Chicago‘ shows, the three current NCIS and the three FBI are so prevalent that they’ve started to form programming blocks that take up whole evening schedules.

One of the first shows to ignite that modern trend was CSI: Crime Scene Investigation, debuting in 2000 and running until 2015. The main show, set in Las Vegas was something of a landmark show, running for those fifteen years and spawning CSI: Miami, CSI: New York and, briefly, CSI: Cyber. Though some of the science was a slave to the post-production graphics and shock-value…and questionable in its actual authenticity (random note: bite-marks aren’t anywhere near as damning as finger-prints and are actually a lousy indicator of identity, despite all the faux-tv-forensics to the contrary), CSI‘s mixture of traditional procedural and supposed forensic facts proved a hit in the ratings.  The cast changed over the years and the spin-offs changed the location but they mainly stuck to that winning template and the occasional team-up. It’s also telling that the original show out-lasted all its spin-offs except Cyber which ran for just two seasons between 2015-2016.

There were regular rumours about the franchise making some sort of return and in early 2020 things started to move forward, though the pandemic caused significant delays. A short teaser for a ‘ten epiosde limited series’ was released in March 2021, indicating a revival that mixed some of the original cast with a new generation of forensic experts.

Beginning on 6th October, the result is decent, if not spectacular, taking a fairly familiar formula and adding in a wrinkle. Yes, everything you expect to be here is here: murders to solve ( a gun-shop owner burned to death), reconstructions to reconstruct, techno to babble and neon scenery to glow along and beyond the attraction of the Vegas Strip, some new names and some familiar faces to welcome you back (and vice versa). The twist is that by the end of the hour, the story evolves from a fairly standard forensics-solve-everything to one of the cast from the original run being dramatically implicated in what could be a massive fraud… the consequence being that the results of thousands of cases they worked on may now be suspect.

The suspect, we finally discover, is David Hodges. It’s actually quite a savvy move. Hodges (played by Wallace Langham) was a quirky, super-smart and sometimes awkward character appearing in a lot of CSI episodes between 2003 and 2015, but likely he isn’t one of the major names you remember unless you were a devoted viewer throughout.  Langham, himself is a versatile actor who also has a string of villains in his guest-starring resume. There’s no actual sign of Hodges in the opener, except in a news-clipping and all our familiar faces are convinced its a frame-job. Is it?  If this was Sidle, Grissom, Willows or Stokes  in the frame, we’d instantly know it was all a set-up but in the case of Hodges, the little voice in the back of our head isn’t saying “No way!“, it’s more honestly muttering “Nah. It couldn’t be…. or could it?“. It’s a smart way to manipulate the audience and it seems it won’t be an easy investigation – right now, it seems to be a story-arc that will play out through this initial run.

It’s good to see Jorja Fox’s Sarah Sidle back and wisely the show walks the line between the character being something of a legend in the department and yet some querying why a person who was about to run the whole crime-lab left then for the sake of love (Old-timers will remember she and Grissom finally got it together and after some turbulence she left to be with him full-time). Sidle’s reintegration into the even-shinier-than-before lab, a temporary situation after Jim Brass asks her to come back onboard to help find out who tried to kill him, is surprisingly smooth and without problems – in fact, a little too easy to be believable, though necessary to keep the momentum going. She’s smart, savvy and seems to win everyone over with effortless ease. Much has been made of Grissom/William Petersen’s return, but those watching the premiere episode might have felt a little perturbed that Petersen doesn’t appear until the last few seconds of the episode and has less than ten words to deliver with all the subtlety of David Caruso. It might have worked better had his participation not been used as major marketing in advance, but despite the actor being briefly hospitalised in August with ‘extreme exhaustion’ twelve weeks into the shoot, we know he’s one the main players, so it’s not quite the drum-roll/guitar-solo moment intended.

It’s also good to see Paul Guilfoyle back as Jim Brass. The trailers made it look like things were not going to end well for the veteran, however he makes it out of the premiere intact. The character has been rendered almost blind by a debilitating eye condition, but can hold his own and is still a major player in the opener… It is worth pointing out, though, that the Fuchs Endothelial Dystrophy referenced for his condition is yet another example of CSI making references that it hopes will sound impressive but won’t be checked… in fact, it’s one of the few ocular conditions that is usually entirely curable.  (Thanks to Donna Lettow for pointing that out!)

Marketed as both an epilogue and a sequel to the original show, it still nonetheless requires some new blood. The crime lab’s boss is Maxine Noby (played by  Paula Newsome), with the team being rounded out by Matt Lauria as Joshua Folsom, British actor Mandeep Dhillon as Allie Ryan and Mel Rodriguez  as pathologist Hugo Ramirez. They are established well enough in the first hour, though it’s not clear if they’ll have the dynamics or staying-power of the first team. That being said, in the writing at least, they’re light years ahead of the recent templating of NCIS: Hawai’i, so they’re off to a decent start.

It’s possible we’ll ultimately see other old-faces (Catherine Willows is supposedly off in Dublin making it unlikely we’ll be seeing her any time soon, but Marg Helgenberger’s new show, Getaway, hasn’t been picked up to series, so she’s being freed up to return to the previously cancelled, now resurrected legal drama All Rise or maybe guest in a CSI down the line).

Though viewing figures just in say it was a ‘soft’ start, there’s probably enough in the pilot to entice older viewers back and it’s still pretty and sparkly enough for a younger demographic to check out, at least in the short-term. It should be a decent ten-episode run… beyond that… it’s like forensics: a matter of luck, scrutiny, diligence and chemistry. 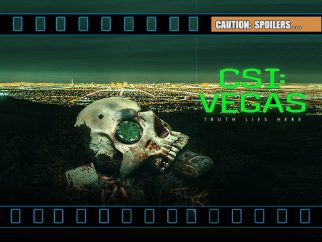 Animated ‘What If..?’ draws its ‘Guardians of the Multiverse’ together…