The penultimate entry's attempt at 'epic' feels a little like being promised 'Akira' and getting 'Transformers'...

The Avengers race to stop Ultron’s vision of creating a new vibranium body… and fail. The now super-charged Ultron is able to easily defeat the Avengers and instantly sends the nuclear missiles flying – resulting in the wholesale destruction of 90% of the human race. A few heroes survive, but with nowhere near the firepower to defeat him… and when Ultron catches Thanos unawares, that easy defeat means Ultron now has the Infinity Stones.

With those cosmic stones, he realises that there’s a multiverse to conquer – the glove allowing him to see through the veil between realities and perceive the Watcher himself.

The latest episode of the first What If..? run proves, to some extent, that the series does have a blueprint other than being an anthology of ‘what could have been’ if different MCU events had gone another way.  What starts as a What if Ultron had Won..? pitch quickly escalates into a What if Ultron Won, then got the Infinity Stones, then crashed through the multiverse and had a punch-up with The Watcher..? and sets up a finale that rumour suggests will bring back some of the characters we’ve seen in this initial run. It all sounds like a cunning-plan – the kind of pitch that would be great for the live-action MCU event,  but without having to spend a budget that would dwarf the coffers of the Endgame epic and bankrupt a country.

The real problem is that such a confrontation, one that should be truly epic, instead results in the animated equivalent of a child simply smashing together two action figures. The Watcher, a supposedly aloof being and book-ending narrator, is suddenly thrust into a rather bland Thwock! Bam! Splat! battle, complete with the requisite battle poses and armour of a Hasbro toy collection and with street-level quips and a running train-of-thought dialogue that has all the subtlety of a 70s comic. (An artefact-hunting expedition through KGB archives has The Watcher essentially acting as light-relief as he Scooby-Doo‘s his frustration over Clint continuously just missing the one piece of information needed. And we haven’t even mentioned the cosmic head-butting that comes later!

It’s not that ‘nothing really happens’ in the thirty minute entry, quite the contrary, there’s a bucket-list of universe -crushing results. It’s that such events don’t carry the import you’d expect, they’re just a checklist.  Bionic Hawkeye and the Black Widow race across an apocalyptic city-scape after Ultron launches nuclear missiles and kills 90% of the world and  ‘Infinity Ultron’ engages in a montage of cosmic destruction… and then a glass-smashing-reality  fist-fight that seemingly ignores the internal logic to date. It sounds ‘BIG’ but is rendered in ‘adequate’. Only weeks ago the Loki series establishes that the Infinity Stones don’t work when removed from their native universe and yet here they give our bad-guy extra strength as he smashes through a multitude of multiverses. On the flipside, said gauntlet doesn’t seem to work as much more than a glove with a blaster attached (*special accessory included with articulated toy!) and The Watcher magics up a nifty shield (*ditto).

On a technical level, the animation is fine with a few stand-out moments, the best bits being – yet again – the ones borrowed from scenes within the MCU live-action movies and then tweaked and repurposed – the problem being that it’s obvious to anyone more than a casual viewer from where each example has been rotoscoped or traced. That being said, Natasha fighting  with Red Guardian’s shield a la Captain America is a nice touch. The voice-acting is fine though there’s less of the MCU-original cast returns. Jeremy Renner is here as Hawkeye and and Toby Jones is the Arnim Zola CPU – there’s also a brief appearance by Benedict Cumberbatch as Doctor Strange. But once again Mick Wingert plays Tony Stark, The Walking Dead‘s Ross Marquand is essaying Ultron, Lake Bell is Natasha Romanoff, Josh Keaton is Steve Rogers and Alexandra Daniels is Carol Danvers – though with the exception of Marquand, they are all essentially cameos.

This episode, then, feels more like a Saturday-morning cartoon with a bit of added weight, depth and scope rather than the epic confrontation we might have expected. A little like being promised Akira and getting Transformers… 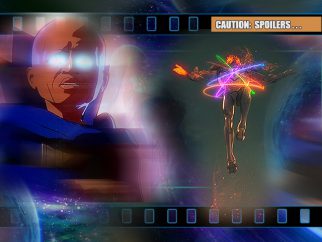