So many themes, so many storeys and calculations... Asmiov's classic books arrive on the screen...

A group of children on the desolate planet of Terminus try to breach the defenses of a legendary beacon, only to be driven back by a force-field that doesn’t seem to allow anyone through. Only one person can even get close, its warden Salvor Hardin (Leah Harvey) and she has secrets of her own.

Thirty five years earlier: Gaal Dornick (Lou Llobell) lives in a quiet fishing community on the distant planet of Synnax where studying the wider world of high-knowledge and mathematics is forbidden. And yet Gaal has a once-in-a-generation interest in such, a mind able to grasp concepts and understand them. Somehow she has solved  a cosmic problem in a challenge set by Hari Seldon (Jared Harris), one of the Empire’s greatest academic minds and she now finds herself whisked away to the heart of the Empire, where she can push herself even further, working along Seldon himself.

But when she arrives on Trantor, the giant metropolis world that is the heart of the Empire, she finds that Seldon may not have been quite as forthcoming about her future as he should. Seldon has found himself facing down  the rulers of the Empire (three beings cloned from the same man at different ages), stating that his scientific studies have concluded that the empire itself is going to fall. After tens of thousands of years, the y only have a few centuries at best – and nothing can change that fall. Naturally, this is greeted with disbelief and outrage by the rulers who wish their eternal reign to continue, but Seldon says the coming fall can only be lessened, not avoided.

Dornick is here to evaluate his studies and tell the Empire whether Selden’s work is right or wrong. Her answer may decide not just her own fate, but the shape of the entire cosmos to come…

Though it’s operating in a time of a stalled industry, a jittery population and plenty of lesser competition, it is ironic that 2021 may be the year that the giants of the sf genre find their place on the screen. Frank Herbert’s Dune is mere weeks away  from theatrical release and fueled by great anticipation.  Isaac Asimov’s Foundation books might be arriving on the slightly smaller screen and with a tad less global fanfare, but it’s clear that time, money and care has been spent on both productions and whatever their eventual level of financial or viewer-number success, there’s certainly a sense of undeniable and admirable ambition.

asks the big questions and then comes up with brightly glowing formulas and equations to support itself – both metaphorically and physically, courtesy of the post-production VFX department.

Those tuning in to Foundation for some wholesale slam-bam action are likely to be disappointed, but then again, if you’re anything more than a casual subscription-platform surfer, you’ll be choosing Foundation because of some foreknowledge of its pedigree. Asimov, one of the rare legitimate legends of the sf genre, wrote the sprawling stories of a corrupt thousands-year-old galactic empire and how it deals with a scientist whose life-long work and equations predict, with almost complete certainty, the falling of that empire within a matter of centuries. The Foundation series began as short-stories written between 1942 to 1950and later collated into a trilogy of books. Asmiov would later add more novels to the series, both sequels and prequels to the main thrust of the originals. They were complex, questioning, political, controversial and challenging – impressive in sheer execution and ambition but not to everyone’s taste.

And much of the same can be said for this adaptation.

After the kind of mission-statement, eye-catching, pixel-perfect and surreal opening credits that epic series are now contractually-obliged to receive (Game of Thrones, WestWorld, etc), the first episode introduces us to the cosmic landscape that infuses the kind of cosmic contempt only created by the familiarity of an evolution forestalled by lack of change, a diluted grasp on its own bedrock and with the kind of political, social and moral conflicts that will always be timely in one way or another.  Slow-burn? Definitely. Ponderous?  Perhaps. Dry? In parts, inevitably – even the best writers can only go so far with excitement over  theorems and statistics – but there’s no harm in a drama asking you to think more deeper and intelligently about the motives of opposing sides in a battle and the pull and push of decisions with consequences. One could easily describe any epic series to such a degree if given the mood. This, then, is a show about math, words and power and  viewing the opening salvo is a little like watching Game of Thrones being played out in The Queen’s Gambit. In a ‘Okay, you have my attention, now let’s see where this goes…’ way.

Jared Harris, now a go-to actor for weathered men at the heart of tough, weathered dilemmas (and quite brilliant in the first season of The Terror) gives an interesting Hari Seldon, making him a driven academic man at the pinnacle of his career – whose actions might be manipulative but whose conviction is pure. He’s not necessarily a ‘likeable’ character but an interesting one – the kind who makes things happen via others and is the pivot for the whole saga, if not it’s main character. In the second episode in particular he looks and sounds uncannily like his late father, Richard. The title of ‘main character’ would, so far, go to relative newcomer Lou Llobell as Gaal Dornick . You may have seen her in Voyagers, but this is by far her break-through role and she walks through proceedings with poise and confidence, essaying a girl from a rural community on a distant planet who walks the tightrope between feeling out of her depth but also not one to feel intimidation from kings and despots (nor, for that matter,  friends and allies).  It is often down to Llobell’s presence that scenes remain compelling throughout.

The Empire’s rulers are three clones of the same man at different ages. The eldest Brother Dusk (Terrence Vaughn Mann) often maintains his solemn outlook, the youngest Brother Dawn (Cassian Bilton) is inquisitive). But it’s Lee Pace’s Brother Day that commands most of the screen-time and attention, channeling the kind of ruthless, self-absorbed affectations that would seem at home in the dying days of any historical empire. All the three aspects are cut from a similar cloth, the same wine decanted at different points and together they make quite the imposing threat to our main characters.

If there isn’t – yet – much kinetic shock-and-awe in the action department throughout, there is some kind of pure spectacle in every scene  The planetary vistas, the endless cities, the palatial corridors, the cluttered streets and the beauty of cold, open space are lovingly rendered by the production designers and VFX department in a way usually reserved for cinemas.  It’s entirely possible to believe in the environments and the various cultural touches on show. When violence does come, it is shocking – whether in the casual murder of a  subordinate by Brother Day  or in the ruthless destruction of the space- to-ground tower/elevator by ‘terrorists’  (which feels like 9/11 on stardusted steroids).

The whole pilot episode feels like a statement of intent from every department and if the result is still not to your liking – and that slow pace and high-brow speeches may easily drive some away – then it’s still hard not to recognise the high degree of sheer effort on show and to want to see where it goes. The second episode is again light on ‘action’ but still firmly confident in spectacle and a sense of menace, with a major game-changing ending that will be interesting to follow.

In short, a drama taking care of its foundations first. 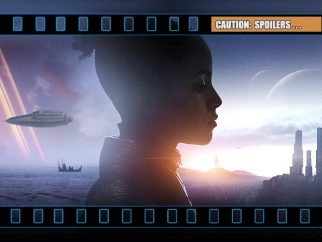