'Reminiscence' presents a post-modern love story - but settles on playing nostalgic homage to a genre...

It’s the near future, after the water-levels rose and sunk part of Miami and the border wars increased the difference between the haves and have-nots. Private eye Nick Bannister (Hugh Jackman) and Watts (Thandiwe Newton) make the best living they can, using technology that enables people to travel through their own memories and recall better times. When the present can be so desperate, nostalgia is a currency all to itself. A whole range of people use their service, far-cheaper than the cutting-edge technology of bigger institutions – and they do so for a variety of reasons, but usually to find a thing that is lost, be it physical or emotional.

One day, as they close everything down, Bannister and Watts are approached by an exotic-looking lady called Mae (Rebecca Ferguson) who begs them to stay open and use their tech to help her find her keys. It’s a low-key request as far as business goes, but Bannister is immediately struck by her beauty and they help her with their request. ‘Accidentally’ leaving an ear-ring behind, Nick returns it to Mae and they begin a romance, but after several months have passed, Mae suddenly disappears.

Using his detective skills and his own memory-tech, Bannister begins a quest to find out what happened to Mae, but as he finds out more, he learns he knew very little about Mae and her real reasons for originally seeking him out…

“You must remember this, a kiss is still a kiss. A sigh is just a sigh. The fundamental things apply. As time goes by…”

Reminiscence‘s Lisa Joy is  the co-creator and executive producer  Westworld and, for better and worse, the connective tissue in her writing style and her assured (but highly stylistic) directorial debut, echoes the brickbats and bouquets often levelled at that show and also at the work of her big-screen brother-in-law Christopher Nolan. Like the frequent boundary-pushing sense of perspective and internal-made-external structure of both examples, the problem with Reminiscence – which is based on Joy’s entry in the 2013 Holllywood ‘Black List’ of scripts that should receive more interest – is that half of the result is genuinely beautiful, lyrical, ambitious and interesting, certainly a triumph for the production department and set-design… and the other half can’t stop being impressed with itself because of that – posturing and preening as it gazes longingly at its own reflection, qualities and influences. There’s plenty of such, here.

Hugh Jackman is always a worthy leading man, a genuine star whose charisma is only getting better as he grows older and his Nick Bannister is the kind of furrowed-brow gumshoe that he should be able to essay with ease. Physically, he’s up for the part as the battered and bewildered ‘detective of the mind’ seeks his lovelorn answers through a quest involving the kind of move-making devices and machines that look lovingly-created and then retrofitted with the dust of the future passed. However the narration he provides hangs on a pseudo-Raymond Chandler pentameter which might work once in a while, but which quickly comes across as a repetitive and distracting, an awkward artifice when it also spreads to other characters’ dialogue. It’s used to give the whole film more weight and echo in the central idea of ‘nostalgia’, but instead it starts to creak under the distracting load as the voice in the back of your own head screams “People don’t actually talk like this…”

There’s no denying the smouldering chemistry between Jackman and Rebecca Ferguson with her deftly walking the line between torch-song temptress and femme-fatale ingenue as ‘Mae’. Ferguson sashays across the stage and screen in figure-hugging slinky dresses, often delivering come-hither ballads with a flutter of her eyelashes and a flick of her hips. It’s all The Big Easy, Chinatown and – with the future-tech-made-old, more than a hard-drive full of Blade Runner. But the film comes dangerously close to simply making Mae the elusive maguffin of the piece for most of the film, gliding around its edges as an echoing motivator made flesh. However Ferguson eventually manages to go just beyond the ‘Jessica Rabbit’ persona to give Mae the necessary air of humanity as well as mystery, the other half of a memento-mori tragedy played out in slow-motion and by the time we’re done, her methods and motives explained to intriguing effect. (Mae’s message-to-memory solution is beautiful and sad in equal measure).

Along with Paul Cameron, composer Ramin Djawadi and production designer Howard Cummings, there are also two more Westworld alumni in front of the cameras. Thandiwe Newton – an excellent, instinctual actor – is decent enough here, but it’s a role that largely requires the ‘telling’ rather than ‘showing’ of a backstory to make her Watts interesting as more than a supporting player. Essentially she’s there to push Jackman’s Nick Bannister in the needed direction and little else. Watts is a fully-functioning-alcoholic and war veteran, a retired sniper with an eye for assessing the line of fire in both movement and conversation and she  has one strong action scene during a bar shoot-out – as good as anything you’ll see in any recent western. Otherwise she’s reduced to looking alternately scornfully and regretfully at a man who keeps staring past her and making the same mistake time and time again. Newton ultimately gives her character more depth than the script itself provides.  The exotic Angela Sarafyan (Westworld‘s Clementine Pennyfeather) also plays a small but equally tragic part in proceedings.

The visuals, as you’d expect from the production’s checklist of names, are both interesting and lovingly rendered – the flooded Miami mostly convincing and the remaining housing structures are beautifully lit, casting exotic shadows, the water-hued neon framing them and creating a solid piece of world-building that embraces both a post-apocalyptic environment and a nostalgia-laden mood and atmosphere. But whenever an interesting point is raised – the idea of border wars, the use of tech, of the continued disparity between the ways people are exploited by way of income and influence – it’s given lip-service exposition and then surrenders to inference and imagery. The technology on show is fascinating but ultimately merely a slave to the plot in a way that leaves many unanswered questions about its users manual. There’s certainly a wider world outside the borders in the film, but we only get to see beyond Miami in anecdotes designed to keep us on target.

It’s possible to put a great piece of music with a great painting and the combined result being not quite as great as the individual elements. That could be true of Reminiscence but in other ways it feels exactly the sums of its parts, yet not a singular note or pixel more – the result only a testament to what’s gone before, standing proudly and with a great view, but actually on the shoulders of giants. In that sense, by its very remit and title, Reminiscence does what it says on the tin – it takes your mind back to more classical times and the result is a vivid but biased ode to flawed memory… but it still feels like a just-missed opportunity to be something more… 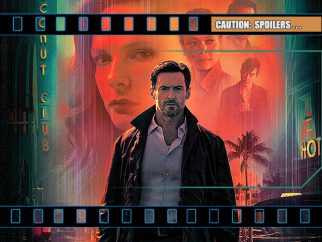