Revenge is a side-dish best served cold - with two straws and a slew of stars. But is it a sum of its ingredients?

Years ago hit-woman Scarlet (Lena Headey) abandoned her daughter Sam, determined to keep her safe from the retribution she was going to take against those who had wronged her. Sam, already proficient in the ways of killing herself, did not take the abandonment well, but perfected her own repertoire of deadly talents to follow in her mother’s absent foot-steps.

Now, nearly two decades later, Sam (Karen Gillan) is following the directions of her long-time handler Nathan (Paul Giamatti) for her latest job, punishing a man who has stolen bonds from Nathan’s superiors. However it becomes clear that though the culprit is guilty of the crime, he’s only doing so because of threats to his abducted-hostage daughter Emily (Chloe Coleman). Incapacitated by Sam’s spot-on execution of her duties, delivery of the stolen bonds is no longer an option for him – the daughter will now die unless Sam can intervene further. Against orders, she uses the recovered bonds in an attempt to save the young Emily.  But things don’t go as planned and now she’s on the run from her employers, with Chloe in tow.

In the great banquet that is the film industry, there’s been a recently-revived trend to create mainstream films with over-the-top stunts, ultra-violence and dark, absurdist humour   – a ‘R’-rated menu that overtly flows with blood and one-liners and almost dares you to dislike so it can claim you simply don’t get the joke: essentially, the new exploitation brand for the Alexa generation. Certainly one can argue that ‘set-pieces over script’ is nothing new for some parts of the action genre and when such set-pieces are delivered with aplomb and style, it’s all well and good. Not every film has to be Oscar worthy, not everything has to be groundbreaking and frankly, in an era where the quality of once-mainstays like Bruce Willis’ output seems to be plummeting by the day, it’s hard to take the serious furrowed brows and bald heads of old too seriously anyway. Shove off, Grandpa… the kids have got and app for this…

A few years ago Gunpowder Milkshake would have been able to say ‘Look, we’re being risky and radical… almost our entire cast are women and they’re kicking butt harder than the men..‘ but though that’s true and something to celebrate, this is a film with a little too much swagger for a title that’s just a few years too late to that party. Despite the absence of a promised ‘Expendabelles‘ presentation, it’s no longer difficult to find leading ladies willing to engage in the rough-and-ready side of the genre. Where once we had Sigourney Weaver starting her career with the likes of Aliens and later Milla Jovovich as the poster-girl for every game-based fx-heavy actioner, we’re now in a place where A-Listers and award-winners actively choose to engage in some guilty-pleasure romps. Director Luc Besson has largely made a career out of it. Oscar-winner Charlize Theron makes no apologies for appearing in the likes of Atomic Blonde and the Fast & Furious saga and Oscar-nominated Margot Robbie (I, Tonya, Bombshell) is now forever linked to the role of Harley Quinn. Neither they nor their accountants are complaining.

But the trend for OTT-fare has accelerated, making entries like Tarantino’s Kill Bill seem almost quaint and sedate by comparison. Gunpowder Milkshake is the latest to personify that lineage without really having anything new to say. The film itself is that stylised celebration of gunplay presented in a way that eschews  brooding realism and goes with loud, brash and in-your-face antics. It’s fine for what it is, but it’s summed up by its title: an actioner fuelled by froth, a film that wants to be John Wick meets Kill Bill but leans more towards Suicide Squad meets Sin City on a tighter budget. Style is everything here, often at the expense of other factors. It’s hard to go wrong with rain-soaked neon streets and though some shots are clearly sound-stage compositions, it’s a conceit that the film doesn’t try to hide. Locations, even the more voluminous library, are actually relatively small and contained, created by angles and camera-work to look bigger, or at least make the action look bigger within.

One can’t argue about the casting. Since her breakthrough days on Doctor Who, the likeable and more than capable Gillan has made a strong name for herself – starring as Nebula in a string of Marvel movies (including a dual role in the every-record-breaking Avengers Endgame) did nothing but empower her career – but Gunpowder Milkshake feels less like a strategic move and more like seizing the chance to hang out and have some wild fun with a group of female actors who also know the movie terrain. Huddersfield-raised Lena Headey is also no slouch, physically and emotionally she’s up for the job and there’s an echo of her pro-active parenting time in the gone-before-its-time Sarah Connor Chronicles.

To say that the film also boasts the likes of normally leading-ladies Michelle Yeoh, Angela Bassett and Carla Gugino in supporting roles, it comes dangerously  close to underusing their talents until it has to. The climactic battle brings out slo-mo, wire-work and hand-to-hand combat, the kind that’s popular in stylised works but which can hide a multitude of sins and failings, sometimes there to hide the seams and amp-up lacking physical performances. It’s a shame because all three of those ladies are more than able to provide what’s required and yet they seem to be in service to the stylised-look, rather than the style serving them. It’s also something that stalks the main players (and no action-slouches, themselves) Gillan and Headey throughout… there’s lots of action for them but a continued sense of  beat-by-beat-learned choreography, valiant its execution but not as organically slick as you want it to be.

Chloe Coleman, who made an impression opposite Dave Bautista in My Spy plays the young Emily, but the film can’t quite decide if she’s an angelic cherub or a candidate for another Hit Girl-type character from Kick Ass. Mark Millar may have received criticism for his potty-mouthed young heroine, but at least he committed to the conceit – here Emily is largely the maguffin rather than an active particpant.

Paul Giamatti is his usually reliably gruff-weathered, fighting-an-inevitable-ulcer kind of character, here being the hirer-and-firer who is caught between genuine, almost paternal affection for his hit-girl but always putting business first. There’s also an assortment of henchmen and characters with familiar faces, Michael Smiley (the under-rated Dead Still), Leeds-born Ralph Ineson as a gangland boss, stuntman/actor Mike Möller makes abrief apperance and another Doctor Who alumnus Sam Anderson also palys a part.

A romp from the start, Gunpowder Milkshake is undemanding fun on some levels, ninety minutes of sheer escapism in the company of recognisable faces, firing enough bullets to mildly entertain, even if none quite find their precise mark.  But it’s still a heavyweight cast with a lightweight outcome… trying SO hard to be ‘hip’, but despite the talent involved, it just feels dislocated. 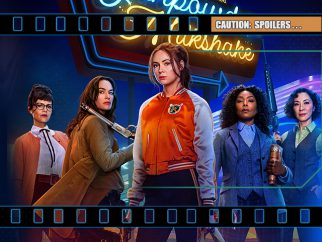