With its late arrival and overdue story, Marvel's much-anticipated 'Black Widow' is the spy-fi that came in from the cold...

She’s been an Avenger, an assassin and a spy, but in the wake of refusing the Sokovia Accords, Natasha Romanoff – the Black Widow – is now on the run from the US government, realising she has few friends and even less ‘family’.  But when she receives a strange package, she’s forced to remember her earliest days, when ‘family’ was a construct to hide her sleeper cell ‘parents’ and ‘sister’ in 1990s Ohio and what eventually led to her days in servitude to powerful men and global agenda.

When it becomes clear that not only is her ‘sister’ Yelena alive and fleeing the ‘Widow’ program, but that the man responsible for their conditioning has also survived, Natasha heads away from the US pursuers and back to Budapest for a chance to to finally end the legacy of the ‘Red Room’ that changed her forever.

But to face her future, Natasha will have to come to term with the decisions she’s made in the past – and the first part of that will be reuniting her ‘family’ for one final mission together…

Load up on guns, bring your friends
It’s fun to lose and to pretend
She’s over-bored and self-assured
Oh no, I know a dirty word…

With a haunting rendition of Nirvana‘s Smells Like Teen Spirit and a nostalgic revisiting of Don McLean‘s American Pie, the long-delayed Black Widow bursts onto the new world stage – the double-barrel powerhouse of both a cinema and streaming experience on the same day. It is, of course, a year late to the party  (some would say a decade late given this is only Marvel‘s second solo-female project in over fifteen years of mega-success and after a history of her being bizarrely overlooked and even overtly replaced in brand marketing) but nevertheless, Natasha Romanoff is indeed temporarily revived for one of the most anticipated movies of the year… and simultaneously marking  a possible sea-change for the industry and a possible return to less covid-related restrictions.

However the short and longer term lateness of Romanoff’s arrival does run the risk of turning what might, at some earlier juncture, have been a mega-movie summer blockbuster, into a eulogy and epilogue rather than a wholesale tentpole. Coming after – spoiler alert! – the character’s valiant ledger-balancing death in Avengers: Endgame, it sometimes feels like a belated attempt to fill-in the gaps, a post-mortem mea culpa for not getting around to Natasha’s story with the momentum and imperative of her male counterparts sooner.

The film has to be neatly slotted into specific timeframes to work. An initial flashback details Natasha’s younger years, part of a 1990s sleeper cell faux ‘family’ that includes her ‘mother’ Melina (Rachel Weisz), ‘father’ Alexei (David Harbour) and younger ‘sister’ Yelena (Florence Pugh), who are dragged out of their US comfort zone and back into the hardened clutches of high-level agitator General Dreykov (Ray Winstone). However, a large percentage of the movie is slotted in to the time just after Captain America: Civil War with the grown-up Natasha having long since defected but now on the run from the US government after rebelling against the Sokovia Protocols and being on her own again for the first time in a long while.  It’s a narrative gap in her story that allows us (and her) to examine her broader history, her personal regrets and the ‘red ledger’ of her past questionable deeds.

Black Widow is a film about family – dysfunctional, dangerous and duplicitous though they may be. There’s a humorous and bittersweet aspect to the way that plays out. It’s unfinished business for Natasha, who presumed she’d killed Dreykov, that her ‘parents’ were long gone and that Yelena had escaped to her own life (the details and logic of that latter element not really fully explained) and who now seeks to finally end the ‘Widow’ program for good.

It’s Johansson’s movie by default, a long overdue acknowledgement of her importance to the MCU – and one that does not whitewash her deadly past. We see that on her original mission to kill Dreykov, an action to secure her defection to SHIELD, she was willing to sacrifice Dreykov’s young daughter to get the job done, a decision that still weighs heavily (though perhaps not so much as Bucky’s similar journey of redemption for being the ‘Winter Soldier’).  But it’s also an ensemble film, with Harbour and Pugh sometimes stealing their scenes. (The consistent joke throughout the film is Natasha’s ‘landing pose’, a cinematic stance that was largely inspired by Adi Granov’s seminal artwork for Iron Man, but a pose that has become almost a cinematic signature of Marvel movies and characters en masse ever since. Yelena’s running-gag distain and mockery of how impractical and ‘show-offy’ it is for a super-spy in the middle of combat is delightfully scattered throughout the film and works well.

But it’s also an ensemble film in execution. Pugh certainly holds her own and she convinces as both a physically-intimidating assassin and frustrated younger sibling trying to escape her sister’s legacy and shadow… and by the end of things a welcome addition to the MCU. David Harbour, also a serious and versatile actor, is probably best known for his role in Stranger Things, and here he is the downtrodden, gone-to-seed Alexei/Red Guardian, the soviet answer to Captain America who got sidelined and denied what he considers his grandeur.  Alexei does have superior-enhanced strength but it comes with an ego and an imposing frame that will no longer squeeze into his old costume. Harbour seems to have more fun here than he did in the whole of the Hellboy reboot, giving much of the comic relief but never losing the pathos of the piece. Rachel Weisz is good in both a maternal and agitator role and Ray Winstone brings us a seedy, misogynistic villain that might be light-years from the likes of Thanos and Ultron and lacking any of their nuanced impulses, but still worthy of boo-hiss credentials. (Though there’s still an airborne climax to come, the inevitable facedown between Natasha and Dreykov is thankfully as much a battle of wits as fists – though there’s still some ‘Ouch!‘ moments. With a deliberate callback to a scene in the first Avengers, Natasha lets the villain of the piece rant and rave with supposed superiority, only to realise he’s being played and he’s given her the information she needs).

In previous chapters we’ve seen glimpses and heard whispers of that infamous ‘Red Room’  – the ruthless training program and facility that took the young Natasha and turned her into an assassin, most noticeably through a Wanda-vision during Age of Ultron (and it’s a shame that Julie Delpy didn’t reprise her blink-and-miss-it instructor role from that sequence) but for all its importance in the plot, it’s the long-reaching shadow and consequences of the Red Room that provides the focus rather than the structure itself. That you really don’t spend any time in that key section of Natasha’s life,  but have it simply discussed in hindsight, is something of a missed opportunity  to fully sell the savagery and coldness of the adolescent conditioning… and when we do get to its geographic location, it’s disappointing to see it as little more than a generic supervillain’s sky-high HQ, rendered in CGI and ready for pixelated obliteration.

There was a danger that the delay might have fueled over-expectations for the film and it’s true that there’s a unexpected intimate, familial tone to get us to the action moments, largely successful if not always even. Though the main set-pieces of the film are dominated by the now expected kind of massive VFX –  that are meant to increase the  stakes but sometimes diminish them – the film is actually best with those up-close-and-personal and top-level hand-to-hand combat sequences and the quieter family moments. Oscar-winning director Cate Shortland does a decent job of making sure there’s an air of humanity running through the film, not so much ‘female empowerment’ as looking at the costs of empowerment in general.

Is this the film that Black Widow / Natasha / Johansson deserved? Arguably, no, not quite… there’s something too cinematically familiar about a woman triumphing over abuse to become an angel of death and the Red Room implications receive no more real depth than a Mission Impossible movie device. In some other part of the multiverse she has her own franchise that easily brings in as much box-office as Thor, Iron Man and Captain America. Instead, like the understated grave-site in the after-credits scene, it’s a memorial to a woman who saved the universe that should have been less tucked away or deferred. But it is a decent outing, a satisfying blockbuster on many other levels, one worth waiting for and one that closes one chapter and opens another, which nowadays, is exactly what Marvel is all about… 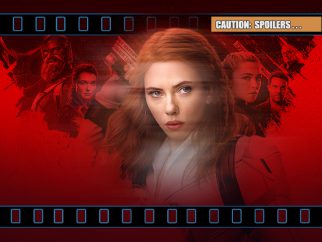