'Evil' continues to offer dark observations and darker humour as David, Kristen and Ben face growing pressure from without and within....

David gets help from Sister Andrea regarding Leland’s map of sigils and that leads the team to a young girl named Mathilda Maubrey, the young foster-child of Brian and Jane, a couple who have successfully managed their multi-religion home (he’s Catholic, she’s Muslim)… until Mathilda shows unusual behaviour that endangers the home. That includes apparently starting fires, though she says she’s not the one responsible. Despite ben looking in to ways the fires could be created with chemicals, video footage seems to confirm the fires starting  by themselves and Mathilda clearly scared of something in her closet.

While a multi-faith solution is just as difficult as it sounds, both Ben and Kristen are haunted by subversive night terrors, though their reactions to them are quite different…

The third season continues apace and shows no sign of losing its quirks and impressive mixture of drama and humour – a show that’s genuinely unnerving but also knows how to deliver a look or punchline to momentarily ease the tension.  Even in an episode without one of its great assets, Michael Emmerson as the malevolent Leland, the ensemble cast delivers on both levels.

So… what is going on with Kristen? It’s clear to see that she’s not acting like herself – she’s ‘graduating’ from some rather steamy dreams to actually going out in the middle of the night to very nearly have a casual hook-up. It also seems that infernal influence may be running in the family as Kristen’s mother Cheryl is also behaving erratically. Despite the ‘power moves’ with which she slapped down Leland last week, now she seems to be a mess… but a manipulative one. She deceives Kristen’s therapist Kurt (Kurt Boggs) into getting advice on how to mend the broken bonds with Kristen, but the way she does it doesn’t quite ring true. Ben’s own night-time visitor continues to challenge him and he’s having less success than Kristen did last season in keeping control of the narrative. That being said, his scientific rationale leads him to make all the smart choices that you’d often shout at the screen in a lesser series… he attempts to set up alarms, monitoring, cameras etc to study any external effects while his mind wanders.

Horror/psychological drama involving kids is a tricky balance as well. Mathilda is played by Matilda Lawler (technically her second appearance in the show – she originally played Brenda, the unexpected party-guest who lured Kristen’s kids into the graveyard in the first season) and she brings an earnest tone to proceedings – playing a smart girl who doesn’t like to be patronised but also one clearly scared over what’s been happening and how she is being blamed.

But perhaps the most fun here is the theological pissing contest between the representatives of the Catholic and Islamic faiths. As even Ben, a lapsed Muslim and normally the voice of cold, technical explanations, is drawn into defending his heritage and it’s interesting how casually dismissive people can be about other people’s beliefs while ring-fencing their own. In a mixed-religion family where despite a usually harmonious environment, the parents have different views on who should perform an exorcism, the idea that one faith’s demonic creatures can only be banished from within that faith is an interesting one. It leads to almost a ecumenical duel between the representatives, though their collective ‘success’ may be moot.

The production values on the VFX of the series continue to impress, not just in their creepy design but also in their innate performance and presentation. There’s a subversive element to their presence: the seductive wordplay and almost pillow-talk from Ben’s visitor and the flaming headed jinn’s almost come-hither smirk and stance whenever it encounters Kristen all lead to more dark humour that has become a signature style of the show.

It’s rare a show entertains and educates quite as much as Evil, a series at its best when maintaining that uneasy balance – laughing one minute, on the edge of your seat the next and all delivered with a script that is as smart as it thinks it is… and genuinely asks the difficult questions without offering platitudes or easy answers. Its move to Paramount+ only increases the opportunities to unnerve in a way that a network show barely tries. 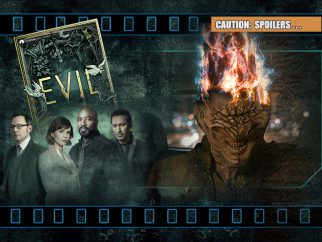