When amorous newly-weds accidentally cause a pile-up on the edge of Vegas, the army convoy involved realises that their cargo is not only dangerous… it’s loose. Whatever was stored at Area 51 is now eating  the soldiers and resurrecting them… and it’s not long before the undead chaos spread into the heart of Las Vegas itself. America reacts by building a surrounding wall  and then the administration decides it would be a great idea to nuke the city… and do so on 4th July to provide some spectacle.

However veteran soldier Scott Ward (Dave Bautista) now surviving with a food-stand in the refugee-scattered hinterland, is approached by shady mega-hotel owner Bly Tanaka (Hiroyuki Sanada) who says that there’s $200 million sitting in the basement vault of his old mega-palace and he’ll split the money with Bautista (and whatever team he assembles) if he can retrieve the cash before the bombing – which means they’ve got a couple of days to pull it off.

Deciding that his share will go to his daughter, Scott agrees and recruits some old friends and new talent.  But even with an experienced guide and heavy artillery, can a small group hope to tackle the dangers that await within – never mind finding a way out again?

Zack Snyder’s Army of the Dead arrives in an era devoid of much cinema and immediately decides to go into overdrive to make up for lost time – but the result is a technicolor mess built largely on testosterone and spectacle.  That’s not always a damning description in and of itself, but here, there’s little else to offer.

There’s a few neat tricks here in the visual department – essentially inserting Tig Notaro into a movie she watched in its entirety before deciding she wanted to join in (slickly and rather convincingly replacing the disgraced comedian/actor Chris D’Elia at the thirteenth hour with the help of careful editing and green screen magic) and a genuinely effective zombie white tiger named Valentine who deserves his own show. But it’s also true to say there’s some god-awful sfx in there as well  – in the first ten minutes alone there are some ‘explosions’ that I could probably have rendered on my own desktop computer with the aid of the most basic software and, frankly, that’s not the opening salvo you need for a film that comes from one of the wunderkinds of spectacle.

Snyder, like Michael Bay, is a technician, thriving on well-executed action sequences but like Bay, it’s rare that the director helms a project with genuinely successful character moments that resonate as anything other than contractual punctuation. That’s largely because, for the most part,  Snyder and Bay hire actors and then shoot them as archetypes.  (The double-edged sword of the Notaro insertion/editing – however good – proves the point). The supposed heartfelt moments between Bautista and daughter are tropey script-dictated lines, their obstacles artificial and the performers can’t overcome that weight. With strong comedic timing and imposing frame, it would be interesting to see Bautista given the breadth of material already given to, say, Dwayne Johnson (the latter having risen to most of the challenges presented), but so far, most of his best roles have required brawn not brains.

Here, once again, there’s nothing of note that you haven’t seen in countless other releases and, surprisingly, lazy in many respects. Fine, you might expect logic to be a casualty for  set-pieces (even the Avengers  ignored physics), but when character actions and story-beats don’t even make internal sense, there’s a problem.  Just how was the wall constructed? Why is there a no-fly zone for going in rather than coming out? They’re hired by the guy who owns the vault to get his money out but if their job is to merely get past the zombie army to get said cash, why do they still have to break-in to the vault (couldn’t he give them pass-codes?). Why is the vault protected by such weird traps. When Ella Purnell goes off looking for her plot-device friends, isn’t it convenient she finds them so quickly in an over-run city full of the undead and actual dead? When it turns out there’s an ulterior motive to the mission, doesn’t it negate some of actions that would be needless or even counter-productive?

Given that it’s a Vegas locale you could forgive the fact that some characters are dressed like dancers and showgirls and from time to time that works as a visual. But when half of your day-player horde start to run, move and pivot like the rejects from an interpretive dance troupe and with a baffling grace that defies their gnawed-off sinew-skewered limbs, it’s the nail in the coffin of something that should have better circulation. It’s true to say that however rich and bloody vein of the zombie genre may have been to mine (or bite) at one point, there’s very little new being offered in recent memory. Snyder flirts with the ‘tribal’ and societal elements of a zombie enclave, something that could have been explored  in an interesting fashion, but instead it becomes almost vampyric and it’s used as a ‘boss-level-up’ structure where we simply tackle middle-management undead until we get to the big-bad. And for a film supposedly about a bank heist, the real robbery is how it casually and liberally it steals from recognisable cinema moments. Count the influences from which it unapologetically pilfers (beyond the expected) for its key scenes: Escape from New York, Aliens, Raiders of the Lost Ark, The Expendables, The Avengers, World War Z. It’s one thing to doff your hat to classics, it’s another to pimp the whole wardrobe.

Then there’s the soundtrack. One after another there are classic songs used to punctuate the action. The fact that every other song is a glossy but inferior cover version of an original  classic or a misused indulgence kinda sums up the experience as metaphor: a Vegas Strip tribute act trying to cram its coffers by using a hit list of others’ material and ideas and presuming that some gloss, sequins and battle-armour will hide the pedigree.  Bad Moon Rising was used to far better ironic effect in An American Werewolf in London (an an early scene is lifted straight from that movie) and The Cranberries‘ Zombie ironically misses the irony of it use by a golden mile.

Cast-wise, Bautista dominates and Notaro’s dry delivery entertains, but with the exception of Hiroyuki Sanada and Garret Dillahunt (the latter ironically late of Fear the Walking Dead), the rest of the cast is largely made up of vaguely familiar actors who you’d be challenged to pick out of a line-up. For the record, they  include Omari Hardwick, Ana De La Reguera, Nora Arnezeder and Ella Purnell, but they’re a motley crew that Ellen Ripley wouldn’t have come out of hibernation to save.

Frustratingly, there are moments when you see glimpses a better film and what it could have been. But to produce that, the outing – currently running at nearly two and a half hours long – would need to lose a third of that running time (and it’s easy to see how, when, why and how you could do that), put more consistent thought into its premise (because the logic of a walled-in Vegas is then so shabbily thought out in practice), shrink its ensemble and beef up character, making the spectacle the punctuation, not the dialogue. Tilt the other way and pitch it like dark-humoured chaos of the opening credits (and it’s ultimately easy to see who Snyder thought would be president)…  and there’s still not enough style to work as edgy satire. (Sean Spicer?  And he doesn’t even get bitten? Seriously?)

In a year where Snyder extended one of his most famous films by twice its original length, brevity was never going to be an option.  Approach Army of the Dead with pizza and beer and all will be right with the world. But expect anything else and all you’ll get is disappointment at a chance missed. 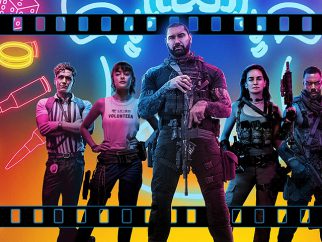