The reality-altering waves continue, but what can our heroes do to find a common solution and reunite?

The stakes are raised as the barriers between realities break down and Bryan’s fate seems sealed. We now see a range of continuities where Kathleen is the surviving members of the twins that found the world-altering debris… and a majority of the time it’s Finola’s agent she encounters. But with the thinning of those barriers, can Bryan and Shelby possibly make contact with Finola and Kathleen and finally figure out a way to reset the time/reality jumps and revert things to normal?

After last week’s reality-bending entry, the second part of the ‘…Icarus‘ story keeps the intriguing format but flips the focus. I noted in last week’s review that while we had seen Finola bumped away from proceedings, we had yet to see Bryan being shifted out of reality. I am Icarus actually redresses that balance, with Riann Steele’s character becoming the main player with a host of other ‘partners’ (some from last week) and slowly realising the real stakes – something that Bryan had nearly worked out for himself.

Enjoyable, yes… but was it satisfying? Hard to say.  And much of last week’s review covers the highs and lows continued this week…

Like all high-stakes two-parters, the latter half often feels more fenced in and restrictive than the concept itself. The set-up of last week’s story certainly paved the way for something interesting, but this second part essentially prolongs the inevitable hand-wavery resolution, adding very little context or depth to proceedings, except giving more fun  twists on the ‘alt-reality’ partnerships. In many ways, some ruthless script-editing could possibly have parsed this high-concept outing down to a single episode – perhaps with a slightly-extended running-time to keep some of the nicer character moments.  And it’s true that – like all time-travel/reality-changing formats – some of the internal-logic itself either doesn’t ultimately add up or simply remains convenient. In many cases, the dramatic or subtle changes to reality are somewhat random and not based on anything specific the characters have done differently. (Why is Shelby replaced in favour of Kathleen after early events – no real reason is given and, indeed, we can only view those elements of continuity from our perspective and the show’s editing decisions). The indication at the end of the episode is that the ‘factory-reset’ that’s achieved leaves Bryan and Finola with no memories of recent twisty events, but that the twins at the heart of the event do – which in turn makes you question if this is the original timeline or just a close-enough proximity.  One thing we wondered last week was whether Maddox’s actions involving confronting his wife’s lawyer would remain in the mix and the second-part of the story confirms they do not, but that his wife is still filing for divorce (Maddox simply gets the papers rather than hears it with an in-person talk, full of regrets, last week).

The …Icarus story was a nice diversion, an abstract intermission in having to resolve the main story’s obstacles – so we’ll see in next week’s episodes how ‘our’ George’s plans are working out. But the only new piece of actual information that could become important is that in one of the realities we see that Bryan was under Maddox’s supervision because of ‘war crimes’ including ‘assassination of protected assets’. Finding out whether this relates to any of the ‘real’ history  with ‘our’ Bryan (or whether there’s any link to the injections he’s being having) will also be… a matter of time. 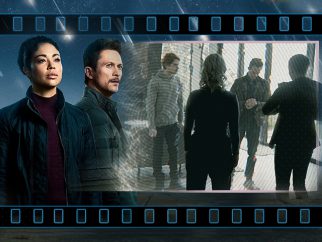