HBO's new murder drama 'Mare of Easttown' might have a familiar formula, but the performances are excellent...

Easttown is a town sandwiched between rural and urban callings in the heart of Pennsylvania, a place where generations of families live, love and hold grudges for generations. It is not a quiet community but the crime rate is often limited to drunk and disorderly, assaults and an encroaching drug problem.

A year ago, 19-year-old Katy Bailey disappeared. The police, headed by detective Mare Sheehan did their best to solve the case, but ultimately had to admit that the fate of the girl, believed to be a drug-taking prostitute, was likely to remain unsolved.  Katy’s mother – who grew up with Mare – is less than happy with that lack of closure and is making her feelings public… Mare continues to work on the case, but it’s hardly a priority and Mare has a shopping-list of problems that extend through her own family tragedy to the normal irritations of the personal and professional kind.

And a day that starts badly is about to end worse. There’s going to be another murder and Mare and the townsfolk of Easttown are going to find their lives, relationships and secrets turned upside down in the name of justice…

Mare of Easttown, the new HBO drama that debuts this week, feels a little like Roseanne meets Broadchurch – its pilot (‘Miss Lady Hawk, Herself’) certainly light on laughs (apart from a couple of well-delivered put-downs) but heavy on that proud, gallows-humor and working-class ethic in a town where the only pastime is to exist on the fading dreams of yesterday or the vain ones of tomorrow. In that sense, one of its greatest strengths is that very ‘everytown’ feel – it’s a drama that takes place in Pennsylvania, America but could just as well fit into an industrial-hemmed suburb such as Sheffield in the UK, a French, Germany or East European town – anywhere where the good times come hard and rarely without consequence.

The series as a whole may be a murder-mystery, but the opener is essentially largely a scene-setter, guiding us through all the main players – all of whom would likely rather be someplace else, often with someone else – and their homes, equally patched up against the weather.

There’s just the right amount of established talent and newcomers populating the town. Unsurprisingly, Kate Winslet – long since a master of her craft –  effortlessly slips into the persona of Mare Sheehan, the local senior detective in the rural Pennsylvanian town of the title, a divorcee weathering the debris of the job and the hard truth that the past is only a bar, a street or a flippant remark away. Her family (including mother Jean Smart, secretly gay daughter Angourie Rice and Mare’s ex  David Denman – who unfortunately lives a street away and has a new fiancée that everyone likes) regularly collide and contract with begrudging affection and reluctant tolerance as necessary – in the wake of an underlying grief that becomes apparent later.  The ever-versatile Guy Pearce is an author / lecturer who has recently moved to town and makes a connection with the detective, offering her a welcome emotional oasis from the grey and grim streets and buildings. It’s quite the effective mix. (WandaVision‘s Evan Peters will also appear as the investigation starts…)

It’s not until the final few minutes of the opener when the murder and the identity of the victim is formally discovered, though obvious foreboding hangs over Easttown like a darkening shroud throughout. Cailee Spaeny as the doomed gymslip mother Erin is very effective, weak and vulnerable, only because she’s at the mercy of those who tear her down – but possessing a strength which helps her support her father and still hang on to hope. When she’s lured into the woods by the vicious, catfishing deceit of her babyfather’s new girlfriend and beaten, your heart aches for the inevitability. Though it’s obviously unlikely her on-screen tormentor will ultimately be the actual killer herself, its literal and thematic confirmation of never getting out of your hometown alive.

Yes, that ‘everytown’ quality and the ‘community-under-scrutiny’ is a double-edged sword because we’ve seen that format countless times before and sometimes quality acting and writing aren’t enough to sustain interest against that familiarity, especially when it feels under no obligation to gain immediate momentum. It’s all slow-burn, perhaps too slow for audiences often demanding a faster-and-faster pace but there’s already the feeling that the heart of the piece will be in its continuing ensemble performances rather than the pace or eventual conclusion. Craig Zobel directs with style from a script by show-runner Brad Inglesby and keeps you interested throughout. It’s the kind of quality television drama that can be sold on the sum of its talented parts, but might not generate the biggest ratings in the long-run, though could still be an award-contender down the line.

Worth sticking with to find the culprit or only to see that other people have more mixed-up problems – and the fact you want someone in the mix to get some kind of a even break – Mare of Easttown is like an incoming storm of inclement weather… worthy and textured enough to watch from a safe distance with and at a run of seven episodes seems perfectly formatted to dip into without over-playing its hand. 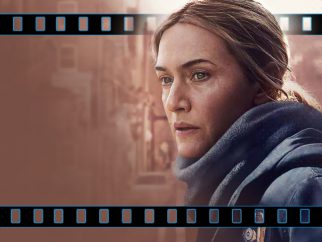