Finola is determined to be reunited with her father, but there are other agendas at work and which don't include a happy family reunion...

Maddox informs Frank Beneventi and Finola Jones that they’ve used imagery taken from Anson Ash’s memories to locate the supposedly-deceased George Jones at what appears to be an underground INFLUX facility and they are initiating an immediate extraction. However the agents immediately get conflicting orders – Jones is told by Ferris that she should get her father away from the CIA as soon as possible after the rescue and smuggle him onto a helicopter and back to MI6 control. Beneventi’s orders from Maddox are even more explicit: George Jones mustn’t get out of the facility alive.

Trusting each other with  the knowledge of their conflicting orders, Frank and Finola realise that there’s a moment coming where they’ll have to decide priorities and likely suffer the consequences.

But before any world-changing answers,  they have to get George out safely…

After the front-half of its season being largely stylish standalone episodes with whispers of conspiracy lurking in the background, this week’s episode of Debris is largely the reverse – a token piece of Debris-of-the-week at the start (a woman who can phase through solid objects escaping from Influx) which you presume will take centre-stage, but then it really doesn’t – followed by a lot of a mission to get to George Jones and the various shady alphabet-soup agency duplicities that have been bubbling under for so long.

What’s notable on closer inspection is the fact that very little really happens except our heroes each having to make serious decisions about their loyalties and priorities… but we’d already established that last week. This week the question is just how far that ‘entente cordiale’ will extend under pressure. Most of the latter half of the episode is spent with demands for explanations that are received with convenient gaps or shrugs. It’s the kind of episode where, given the lead-ups, you’re either expecting major answers or waiting for George Jones to be rescued and then get killed anyway (thus prolonging any answers) and there are several points where either fate seems imminent. The fact that neither happen and we’re left with people standing around making awkward conversations in cheap hotel rooms, yet still leaving the viewer with a ‘Annnnnd..?‘ situation when it comes to real revelations, is disappointing.

George Jones as a character now seems like an off-screen plot-device given convenient solid on-screen form, but not one that’s being well fleshed-out. The story calls for him to be both a highly-respected scientist and a shambling husk of the man Finola’s talked about, a character that’s full of vague exposition but can’t remember the important details, a family man who doesn’t ask about his family, a key figure who might be able to build a life-changing device, but probably can’t find the ice-machine, a man who says he needs a list of things to construct something though he has no idea what it does? Those contradictions might all be fine if the performance was engaging or charismatic enough to keep you from noticing, but Tyrone Benskin really offers nothing that his otherwise long career as an actor would indicate that he should. It’s all mumblings, frowning of brows and overt filler masquerading as plot-development and in a show that’s often compared in good and bad ways to The X-Files, that’s a somewhat worrisome. warning-signal.

Facts-wise (presuming we can trust anything or anybody) Jones Snr. says he was literally reanimated from the dead (though – conveniently – not explaining/remembering how, just that they went in ‘through the eye’ and that it’s a process that can only be done once), though this could also be setting up both an upcoming  escape-clause for other characters and setting artificial limitations to how many times it could be used as a get-out-of-jail-free card if you decide not to use the ‘debris-of-the-week’ for such purposes.

The duplicity between the CIA and MI6 is supposed to be quietly nefarious, but is starting to seem just contradictory and silly. It’s one thing to have patriotic priorities and keep some information from each other’s departments but Jones and Beneventi getting such differing  and overt orders from their superiors and being told to betray each other speaks to utter chaos rather than subtle, clever agendas. The fact that the agents are now simply telling each other everything at least lets the audience get out of the ‘who knows who knows what‘ frustration of earlier episodes. But the fact that Beneventi and Jones are both openly defying their superiors must obviously have consequences and there’s a risk that the ‘on-the-run’ aspect will see the show painting itself into an early corner as it enters the last half of the season. Debris is the kind of delicately-balanced outing where things must never become becalmed or rushed  (or become merely abstract and repetitive) but if our heroes have gone rogue and have everyone after them, it’s going to need both a pay-off and/or a believable exit-strategy which ultimately means significant answers to our main mysteries sooner rather than later if no wheel-spinning is involved.

Debris has solid performances and interesting ideas, but like many shows before it, it’s all about pacing and parsing… hopefully its reach will not exceed its grasp on its reality… 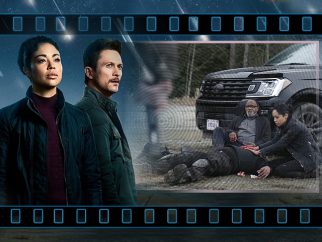