If an AI-program designed a mash-up of every genre-show to date, The Irregulars would be the over-regulated result...

In the slums of Victorian London, you earn your crust any way you can – sometimes legally but most often by your wits… and you pick those you can trust carefully. One such group consists of Bea, her sister Jessie, Billy and Spike. But in a matter of days, their lives change. Firstly, their exploits draw the attention of a rich and listless stranger called Leo who is eager to get to know them better. Secondly, there’s a rich doctor who asks them to be his eyes and ears around London for the small detective agency he runs with his colleague.

But it soon becomes apparent that the young group of teenagers, accustomed though they are to the rough and tumble ways of survival, may be in well over their heads. Because Leo is actually Prince Leopold, the doctor is John Watson and the investigations they are asked to help with prove supernaturally dangerous to all concerned.

As Jessie starts experiencing visions of dark beings and distant lands, it’s very clear something highly irregular has its sights set on London…

One can almost feel the opportunistic pitch that must have been made by series creator  Tom Bidwell:  Buffy (a group of spunky outliers running rings around adults while they fight the supernatural) meets Stranger Things (the dark is rising!) meets a teen-themed Torchwood (can the kids swear while they fight the sacred and the profane? Sure, why the fuck not?)… all shows with a variation on a Hellmouth/Rift that’s copied again, wholesale, here. Throw in some Sabrina the Teenage Witch, Penny Dreadful and a little Doctor Who and…. bingo. But – ironically – it almost feels as if the titular Sherlockian motif, suddenly a modern go to with all the interpretations and reinventions of the last decade or so,  and the very use of his ‘Irregulars‘, have been grafted on as a later selling point for investors. Royce Pierreson as John Watson is a hugely unlikeable character in early episodes and it’s well into proceedings before we get any real introduction to Sherlock Holmes himself (and, even then, hardly a sympathetic character) played by Henry Lloyd-Hughes. But they are ever supporting players to the ‘kids’, all of whose characters seem more intelligent than the adults and, as performers, seem to be unaware this isn’t a contemporary drama.

The central cast are fine as archetypes and make a culturally-diverse and timeless gang.  Thaddea Graham holds the gang together as default leader Bea and Darci Shaw as Jessie provides an away-with-the-fairies ingenue – and the two have an interesting sisterly bond. Jojo Macari’s Billy and McKell David’s Spike are the impetuous guys, each fiercely loyal. Harrison Osterfield as Prince Leopold is essentially our viewpoint as he discovers the dynamics of the group and slowly begins to realise that despite all his wealth and position, it’s these ‘Irregulars’ who arguably have the most life and freedom.

In most cases a racially-diverse cast would automatically be a welcome factor in proceedings, but historical dramas – be they gritty or lightweight – can sometimes be problematic in achieving the right, desired balance. Shows set in certain established time-periods, by necessity, have a need to reflect and convince audiences of that by showing the nature of those times, often for better or for worse and good dramas know how to weave that in to the mix. Any modern, more enlightened sensibilities that lift a viewer out of that period-drama experience have to be weighed carefully for tone or they can look like retroactive remits rather than internal logic. And the truth is that placing quite so many black actors in the mix, especially in key high-society roles here doesn’t reflect the otherwise solid  Victorian England veneer that has been physically created to surround them. That’s absolutely fine, indeed something to celebrate if you’re going for the abstract elements and fun story opportunities rather than accuracy (for instance it’s been a whole marketing opportunity for the likes of Bridgerton  – and, to be clear, if we’re going for realism there hopefully weren’t demons blatantly wandering around in the 1800s either) or with a specific intent or mission statement to do so, but for a show that’s otherwise so earnest about its physical setting, it’s an interesting decision for overtly noticeable diversity rather than a happy accident.

But it’s only part of the anachronistic blueprinting that you have to embrace if you’re going to dive in. The language itself is also oddly off-kilter. Though they technically have their origins earlier, words such as ‘clone’ and ‘teenager’ are decidedly twentieth-century choices in the way that they are casually thrown in to conversation. Equally, the soundtrack feels like random place-holder music. It’s one thing to have songs that are non-period, but if so they must evoke something that’s actually happening. Hearing hip-hop and modern music as a backtrack for people walking down a street just feels wrong and adds to the over-all piecemeal aspects… and all of these conflicting factors accumulate to a feeling that seems more like a lack of clear vision – ultimately a confusion over what everyone wanted of the final result.

Despite not knowing its audience (probably too lightweight for older viewers, but some well-rendered horrific graphics and occasional profanity making it unsuitable for younger kids) it’s likely that the series – launched for binge-watching on Netflix this week – will pass the time well-enough.  Some solid work has gone into impressive sets and largely successful post-production effects and there’s enough established genre-touchstones to be diverting or derivative, depending on your viewpoint. Some of the visuals are wonderfully unnerving and imaginative – ravens peck out the eyes of an unfortunate in the first episode, toothless children make a particularly effective second episode. The lead actors are good enough and after a loose, scene-setting pilot, the series does get better as it moves forward through its eight episodes… though it never seems to devote itself fully and with a few cosmetic tweaks it could be set anywhere, anywhen… which is a double-edged sword.  (And seriously, when there’s a moment that Bea talks about a mysterious doctor who needs their help, you could have had David Tennant open the Baker Street door with an ‘Allon-zy!‘ and kept almost every other aspect of the show the same). Yet despite the feeling you’ve seen all of this connective tissue before in one form or another the mix-and-match finished result isn’t as unpleasing at it sounds, an unapologetic gothic-hued romp that is simply late to the over-crowded party and – frustratingly – just not quite as imaginative as its many parts should have made it.

The Irregulars is agonisingly close to having everything necessary for being a cult hit – and it could be a show that would develop better in a second run after this season-long, entry-level learning curve. However, with another fantastical and highly-marketed slice of Victoriana coming with The Nevers in May, will it get the chance?  It isn’t remotely ‘bad’,  but despite (or because of) all its missed boiling-under potential and obvious influences, Irregulars sadly remains resolutely regular so far.

All eight episodes of The Irregulars are available on Netflix now. 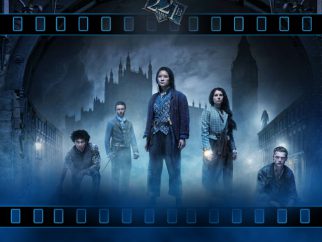