Beneventi and Jones go into maximum overdrive when their latest call-out involves a whole town...

The town of Fleetwood, PA has a problem. Metallic objects are starting to move of their own accord. Cars, carts, gas-tanks, chairs are all being dragged through the street, slowly building up and surrounding the town. Beneventi (Jonathan Tucker) and Jones (Riann Steele) are sent to back-up a team that’s already evacuated the area… but during their search they come across a man called Eric who says he has something important to do – but can’t remember what it is. He’s sent back with medics, but only a short time later the duo see the same man walking the streets, covered in blood.

What is happening in the town, what is moving the objects and what makes Eric so important?  The town’s survival pay depend on finding the answers – but miles away there are even more questions for both the CIA and MI6 to solve – with or without their agents…

We mentioned in our review of last week’s pilot that the show would have to be more than The X-Files if it was going to achieve true success. But there’s also the truth out there that it can probably do well enough within The X-Files formula as long as it tells decent stories and ultimately avoids the over-complex and contradictory mythology in which the classic show painted itself into an ever-more frustrating corner. In that sense the ‘phenomena of the week’ remit (though potentially distractingly abstract from week-to-week) could still serve it well for a while as long as its well-executed and though its own animal, this second installment isn’t that far away from the ‘objects moving under some mysterious force’ we saw in the pilot.

With it’s eerie inanimate animated objects, the episode might initially feel a little like Stephen King’s Maximum Overdrive, but in a bait and switch element and a more  ‘Prestige‘ moment, we find that one inhabitant of the town (Eric – played by David Alpay) appears to be caught up in a cloning anomaly, each flawed recreation a slightly askew copy of the original. It’s an effective piece of story-telling made even more strange when Beneventi finds himself duplicated and then has to shoot the new version (at least, we hope it’s the new version?) and even more horrifying in an ‘Invasion of the Body Snatchers‘ way when the cloning mechanism produces a variation that partially combines Beneventi and Eric’s bodies – but not well. Sometimes the CGI visuals are more subtle. In its own way the mere sight of inanimate, metal objects slowly crawling along the streets and sidewalks is highly unnerving, likely achieved through smart-angled cinematography and simple off-screen pullies… but still effective.

It is telling  that, once again, the episode does play into emotions being a key aspect of resolving the week’s dilemma. Eric’s clones all reflect a need to repair or remember something he knows is important… which turns out to be reaching out to his estranged wife who left just before the debris crashed down. When ‘Prime’ Eric is recovered, he’s able to reach her and ask her to come back, thus resolving the problem and completing his mission’.  Finola’s sister Dee (Gabrielle Ryan) is also featured – handling their father’s ‘death’ fairly badly, though Finola is trying to mend fences. It’s that emotive and tech balance that distinguishes this from many other high-concept shows and one hopes it will be a permanent fixture to some degree. Dry humour also remains an aspect of the show with the episode title, You are not Alone, having an ironic as well as emotional skew and with Beneventi’s colleague Maddox (Norbert Leo Butz) noting that in the case of the clone, it must have been hard for Beneventi to ‘see the person he loves most, dead‘).

Mythology-wise there are some more developments – less so with what the alien ship might have been like when whole, but definitely on the trust and co-operation (or lack thereof) between the US and UK departments. The UK’s MI6 reveals they have some information about the rogue group – referred to as Influx– that seems to be also tracking pieces of debris. The US’s CIA has quiet proof that Jones’ father is apparently still alive and though Beneventi gently (and reluctantly) probes Finola for more facts about her father’s suicide, it seems his partner genuinely doesn’t know there’s any question about Jones Snr’s status and that’s the way it is staying for the moment.

Debris still feels like the kind of good show that could ultimately disappoint, not least because it could continue to be interesting and yet still be cancelled if viewing figures aren’t stellar – another entry on the ever-growing mountain of high-concept series that set up a mystery that’s never answered for one reason or another.  But judging on what we’ve seen so far, there’s certainly both quality and potential… 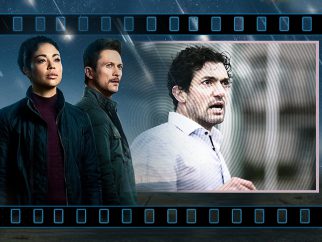