Promising ‘Debris’ has potential to be more than ‘The Wrecks Files’…

NBC's latest high-concept show is clean, lean and intriguing, if somewhat familiar around the fringes...

Three years ago, images were captured of a wrecked alien spacecraft moving through our solar system. For the last six months debris from that spacecraft has been falling to Earth, but the problem is not just of the ‘shooting star’ variety but in the properties that these many pieces seem to possess.

Varying from piece to piece, they appear to have unusual effects on those who come across them and now various interested parties want a closer look. The less scrupulous searchers are willing to deal on the black market and pay vast sums of money, others are using vast resources to fully understand their purely scientific value and consequence. A joint task-force, combining the resources of Britain’s MI6 and America’s CIA, has been assembled, After a tip-off that a shady business deal is going down in a downtown hotel, the planned intercept goes drastically, physics-defyingly wrong with several deaths and a strange disappearance. The two senior agents arriving on the scene – MI6’s Finola Jones (Riann Steele) and CIA veteran Bryan Beneventi (Jonathan Tucker) –  know enough to know what they don’t know,  but events miles away are going to complicate their investigation.

On the side of a road, a car is pulled over, a child is missing and a woman is found… several inches higher than she should be in a nearby field.

Jones and Beneventi are about to find out more. But they’ll also learn about loss…

The strangest thing about NBC‘s new Monday-night show Debris turns out to be how ‘non-piloty’ the pilot feels. Yes, there’s the obligatory moments of exposition that reference some needed info, but otherwise the episode’s story, dynamics and momentum feel far more like a mid (or even late) season episode that accidentally got broadcast out of order.  An exploding spaceship in the outer reaches of the solar system (which would usually be the VFX screen-shot for a high-budget opening salvo) is reduced to a few lines of mere text description like a weekly recap and then we’re off… dropped into a surreal business-deal quickly going wrong and an already established task-force in pursuit. Then we’re right in the mix with Jones and Beneventi with only a few cursory nods as to why were brought on board, vaguely what they’re searching for (the clue’s in the title) and their successes/failures to date.

All good shows play to the differences between lead characters and team-members, but a smarter script means that it’s not over-stated here. As actors, Steele and Tucker are simultaneously strong and understated, both playing characters that are tough in their own ways, but also able to deliver the sardonic, self-deprecating humour that cuts through the more serious moments without falling into parody or trope. MI5 agent Jones (Steele) is the physicist , following in her father’s legendary scientific footsteps (he’s the man who pinpointed the original craft) and who maintains a positive belief that whatever has come from beyond the Earth should be treated as a positive and something to be understood. Beneventi (Tucker) is the more weathered and pragmatic ex-frontline soldier and CIA operative whose viewpoint on the current bizarre events is more cynical of the ‘whys’ behind the ‘whats’. There’s certainly some disagreements along the way (not helped by the superiors of each agency instructing their agents to essentially withhold information from the other) but there’s also no active dislike or conflict, merely professional boundaries (though by episode’s end we know one secret that could provide friction). Ultimately she‘s there to make sure any discoveries should be used for good, he’s there to make sure it isn’t used by bad people – and it’s an important distinction.

We don’t get to know much about the forces that appear to be working against our team. However the fact that one of the mysteriously elusive ‘antagonists’ Anson Ash is played by the actor and spoken-word poet deliciously named ‘Scroobius Pip’ is almost all the justification you need for watching.

The lack of blockbuster effects at the start doesn’t mean that the show is devoid of impress post-production work, only that it’s more subtle and well-used. Bodies that float along a few inches above the ground are so effectively achieved in their rendering that it comes across as wonderfully mundane and believable that you probably won’t question how it was done. The strong camera-work, lighting and cinematography from veteran director Brad Anderson combine to achieve a look that says every penny was spent in the right way, but without being overtly showy.

Truthfully,  Debris doesn’t feel like it’s pushing borders – the procedural/quirk of the week influences are numerous with The X-Files and Fringe being the obvious touchstones so far (showrunner J H Wyman also worked as a producer and show-runner on the latter, which improved as it continued) – but, importantly, it does what it does well and avoids some of the more annoying clichés and tropes that litter an admittedly familiar structure.  The pilot is also more emotional than you might suspect, ultimately dealing with grief as much as the terchnobabble akin to reversing the polarity of the neutron flow… and that emotive aspect could be an important quality as we proceed. While the pilot is interesting and well-executed in and of itself, at this stage it’s still all set-up with no guarantee of satisfying answers and the fact that the ‘debris-of-the-week’ will apparently have the ‘strange effect of the week’ doesn’t exactly speak to detailed blue-printing, rather a conveniently open-ended remit for the effects department and an excuse for the writers room to go in any direction that takes them on a whim. As a viewer, there’s also undeniably a slightly cynical standpoint that Debris will simply be another addition to NBC‘s long list of high-concept shows that either fail to find an audience or one that may simply have a good mystery but no destination.

But the pilot is promising, solid in all departments and with a certain vibe that things could develop nicely and should prove worth returning to for future episodes to see how Debris‘ field of vision spreads… 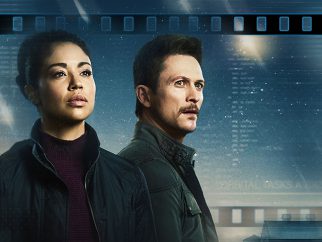