'The Equalizer' reboot is a streamlined vehicle for Queen Latifah but only just the sum of its parts...

To her daughter, Robyn McCall (Queen Latifah) might be a tired charity co-ordinator who has finally decided to give up her high-flying job to spend more time at home, but her offspring doesn’t realise – and doesn’t need to know – that mom was actually a high-ranking covert operative and something of a legend in the CIA. Despite overtures from her old boss (Chris Noth) to come work in private security, she’s disillusioned with it all. But old habits die hard and when she witnesses a girl in trouble, every instinct insists she needs to step in to help.

The girl witnessed a murder and is now on the run… but independent closed-circuit footage shows her as the assassin. If the footage has been tampered with, it was done by experts with resources – but why? Robyn’s going to need the help of some old friends. And if they all live through the next twenty-four hours, Robyn may have just found her new calling.

The beauty of the original Equalizer was that Edward Woodward wasn’t your typical US drama star and certainly not the average American’s idea of a spy – despite the British actor’s previous resume including gritty types such as the UK’s Callan. He played the role as a middle-aged man who was a solitary, cerebral avenger – an old-school, often reluctant cold-war warrior rather than a full-on Charles Bronson-hued vigilante. Denzel Washington recently gave us two movies with a more gritty re-invention, inspired by the premise but feeling very different. Now, the 2021 remake goes back to basics. It may have Queen Latifah in the confident and sassy title role, but seems somehow less assured that its singular star-power will be enough and – at least in the pilot – plays safe by giving her a team, thus making it feel a little like, well the A-Team. If you have a problem, if no-one else can help etc etc. (Indeed, one can imagine someone pitching this exact show and calling it The Equalizers).

Queen Latifah, as the lead, is fine – balancing the quieter family angst and in-your-face fights well enough. Yes, the script itself is overtly-hokey at times (“That’s the problem… everyone’s playing chess and nobody’s thinking about the living, breathing pieces we’re sacrificing along the way…“) and the editing/choreography certainly helps the star with the action imperatives but to its credit it is neither too dark and gritty nor too streamlined wirework and probably feels better in execution than building an overtly-kinetic  but generic series around an action star. There’s nods to the fact that young black people can easily end up disenfranchised  – Robyn’s daughter is caught shoplifting and Robyn, in a life-lesson-opportunity tells how a mentor-figure saved her from an equally perilous start – and plenty of contemporary touches, but the format of the show feels acceptably familiar. The lead may be a black woman rather than an white Englishman, the intelligence background is specifically CIA instead of some un-named agency and the ‘Equalizer’ ads will now be online instead of in the paper, but other than that… it does what it says on the tin.

Adam Rodriguez (God Friended Me, Fargo) and Liza Lipira (NCIS, Unbelievable, Battle Creek) are the useful back-up: computer-whiz and sharp-shooter husband and wife, holed up in an off-the-grid, cavernous underground room with a wall of screens, all situated beneath an unassuming restaurant. (Every home should have one) Chris Noth is McCall’s old boss who mutters, complains and then provides Robyn with everything she needs on a more official, if deniable basis. Tory Kittles as Detective Marcus Dante also looks promising as a honest cop, but one determined to find out McCall’s secrets.

Ultimately, the new incarnation of The Equalizer is safe, enjoyable viewing – a series that probably won’t tax the brain-cells too much, but plays to all the pluses of the template. The pilot’s story is basic and rather uninspired, but works as an intro into the rebooted world of McCall’s new mission statement. It’ll have to build to something more generic in the longer term and it’s a real shame that the familiar and iconic Equalizer theme music from Stewart Copeland seems to be gone, excepting the odd occasional faint and incidental homage… but for now, all things being equal, it will suffice. 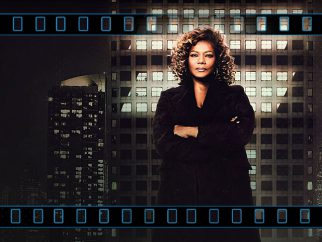