Mando and his allies gather for an all-out rescue-mission, but can anything tip the odds in their favour? Or... anyone?

Finally knowing the location where Moff Gideon is holding ‘The Child’, Mando and his ragtag team need a solid plan. Managing to gain the reluctant help of Bo-Katan and Koska Reeves in return for handing over Gideon’s Dark-Saber (should they defeat him), the assault is planned in detail. Getting on to an Imperial ship will require luck and skill, but getting away could prove… unlikely. However with Fett’s Slave 1 providing cover, Mando, Fennec, Cara, Bo-Katan and Koska  manage to infiltrate the ship and allow the Mandalorian to head to the prison chambers.

But Moff Gideon is able to anticipate their moves and offers the Mandalorian another deal, one he can enforce with his own robot army who prepare to tear the invaders apart.

It seems like the rescue mission is doomed to death and failure and their one and only plan is fated to fail. But, no, there is another…

Now this is the way to finish a season. As The Mandalorian‘s final episode (of its second run) readied for release there were many foreswearing off social media until they’d had a chance to see it, wary of any inevitable spoilers – and likely big ones given the perchance for pay-offs and cliffhangers. However it’s unlikely that many were ready for a deluge of mythological moments that certainly brought things to a head.

While some were assuming Rosario Dawson’s Ahsoka Tano could be one of the influx of  characters to make a notable re-entry into proceedings, the ground zero was much more notable and historic. Yes! R2-D2 himself!!!!! Okay, also with the arrival of a mighty, cloaked Jedi Master, striding through enemy lines like they were cross-firing detritus (and not just Iron Man / Terminator hybrids).  The pacing is perfect with the gradual realisation of just who we’re about to see and then the only question is  then how we’re going to see him. In the end, the dynamic entrance of no less than Luke Skywalker will likely make jaws-drop, rendered with deep-fake, de-aging-quality by Mark Hamill himself (and Max Lloyd-Jones as the Jedi stand-in, as necessary). It wasn’t perfect – there’s still something of the uncanny valley aspect that remains thisclose (but no further) to near-indistinguishable photo-realism – but it was still mesmerising in the moment. (One wonders if there was ever any consideration to the fan rumour that Sebastian Stan bears such a resemblance to the young Mark Hamill that he could step into those boots?).  Fundamentally it will please a lot of older Star Wars fans who felt that the feature film  The Last Jedi turned their hero into a flawed, non-inspirational version of the original character. His Mandalorian appearance is, after all, a version of Luke who is only a little older than his Return of the Jedi appearance and arguably in the prime of his Jedi’ness. (And if Mando is going to be upstaged by yet another guest-star, you really can’t get much better).

Directed by Peyton Reed and written by Jon Favreau, it would be hard to begrudge this season finale as anything other than a masterstroke of lightsaber proportions on so many levels. The pacing and priorities of the full season may produce quibbles and grumbles, but the climax really does deliver. On a production design and technical level, the series continues to be a front-runner for the industry. Visually the imagery was as good as ever and on a creative level, much of the action aboard the Imperial ship (particularly our heroes skulking around corridors and Luke cutting his way through conveniently non-sentient, robotic soldiers) seemed to homage the original feature-film beats in the best way. Ahsoka’s beautiful, even graceful lightsaber battle was quickly established as a tv benchmark to rival the big-screen duels, but here Luke’s more savage journey through his opponents to get to our heroes raises it once more.

It’s good to see Pedro Pascal’s real face again and he delivers an emotional and worthy goodbye. Giancarlo Esposito is as reliably good as ever, always at his best when playing a villain with confidence and resources and though he ultimately survives the episode, one wonders if he’ll be back – it would be a shame not to see him again in some dastardly fashion. Ming-Na Wen as Fennec is good (and it looks like we will be seeing her again) and Gina Carano provides admirable muscle.

In the week where the original Bobba Fett, the beloved Jeremy Bulloch, sadly passed away at the age of 75 (due to complications from battling Parkinsons Disease), it’s interesting that those viewers who stayed past the non-illustrated credits would see a teaser for the next chapter in the Lucasfilm tv universe. Temuera Morrison’s Fett is largely absent for most of the episode itself. However, a Tatooine-based epilogue hints at a new Jabba-less power-regime to be explored in The Book of Bobba Fett. That is  currently scheduled for December 2021, around the same time The Mandalorian was said to be returning for its confirmed third run. Are they companion-pieces or are somehow the same thing? Could the current hit show and Disney+ flagship simply change direction and become an anthology-format? To be fair, it’s not clear what would be next for Mando/Din Djarin and whether  The Child/Baby Yoda/Grogu’s story is also done for the moment. It’s now hard to imagine the show without either of them, but equally this week’s episode would be a resolution of sort, complete with a totally valid and emotional helmet-removal and it would be strange for the infant to continue as/return to Mando’s charge now that he’s willingly been put in far more experienced, safer and legendary hands and which would make the dramatic entrance and exit  somewhat defunct). On the other hand, ohhhhh so many questions could still be explored.

This is an episode that will likely encourage  multiple viewings. That is the way. 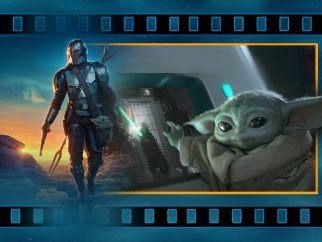