The Butler does it... again? The epix show paints an interesting picture of a disunited kingdom...

A year after the dramas as the Raven Society and the No-Names fought for the heart and soul of England, it would seem that the fascists have won and the few areas (such as inner London, Manchester and Liverpool that are holding out)  won’t last much longer. Alfred Pennyworth, dealing with so many personal losses is doing everything he can to bide his time – never seemingly taking sides within the walls of his bar in the neutral zone, but actually more than willing to do whatever it takes to get enough money to get himself, his mother and friends out of the country.

But as both sides ready for a final, desperate push, it would seem that the war is not yet done with Alfred Pennyworth as old faces (such as Thomas Wayne, Martha Kane, Bet Sykes and Lord Harwood) make plans that will change the course of his life and decide the future of a country…

Anyone tuning in to the first season of Pennyworth, broadcast last year on epix in the US (and later on Amazon Prime Video in the UK) probably didn’t get what they expected. Coming on the heels of a previous pre-Batman concept (FOX‘s Gotham), the idea of a show looking at the early days of the man who would become the Caped Crusader’s best friend and caretaker, Alfred Pennyworth, probably felt somewhat derivative and maybe even slightly dull in description. However the result was anything but… a production that mixed a few familiar names into increasingly unfamiliar territory. The names of Alfred, Thomas Wayne and Martha would have caused some recognition, but otherwise this was as far as you could get from Gotham – both as a show and in geographical terms.

Instead this was an early 1960s London, one that felt more like a slightly askew take on Michael Caine’s signature Alfie and the swinging adventures of the original Avengers (circa John Steed and Emma Peel) but with a dangerous undercurrent where bloody violence and bad language abound (not Game of Thrones levels, but certainly enough to make a network blush).

However, after a promising start, the idea did seem to waver slightly, not quite sure of its pacing and often pushing the pace forward in fits and starts – sometimes very gritty, sometimes stylistic, sometimes fantastical and always with an eye to the politics of the day (then and now). When Alfred took on nefarious underworld characters with their various agendas and one ne’er-do-well’s eye on a full-scale coup that was one thing… but bedding her Majesty herself seemed a little unlikely. As the country headed into literal civil war, it felt as if the show was playing with an interesting deck of cards, but never quite sure how to play the best hand.

Given that the first season finished on an explosive note with the death of Alfred’s father (at Alfred’s own hand as our hero acted to save the monarchy) and the country in chaos as the coup seemed successful, the real question was where a second run would go. Essentially, it’s a year later and the rest of the world has taken a pragmatic back-seat, watching what happens rather than actively taking part in the UK’s troubles. Central London has become a Casablanca-style stronghold where the ever-resourceful Alfred tries to keep the neutral territory going for all but all the while planning to get out of the disunited kingdom as soon as finances allow. To that extent, he’s playing a lot of sides against each other, but trying to remain on the good side of all of them. His conscience rings the occasional alarm bell, but otherwise remains tactfully quiet.

Jack Bannon – as Alfred – is still on fine form, bringing that ’60s attitude and flair with every scene but with an ever-growing painful undercurrent that was there before but which has blossomed like a poison flower in the wake of last season’s losses. You constantly wish him well but want to smack him around the head for the plentifully dubious decisions he makes. Paloma Faith as the poisonously pragmatic Bet Skyes (an amalgamation of Coronation Street‘s Bet Lynch and Oliver Twist‘s Bert Sykes in name and deed) also continues to give a catnip performance making you wonder when she’s going to snap and who she’s going to take out when she does. It’s clear even from the first episode of the new run that she still truly allies herself to no side but her own. Many of the supporting cast return, with Ben Aldridge as Thomas and Emma Paetz as Martha fighting the predestined sexual chemistry, with many of our ensemble surviving by their wits but sometimes moving in different circles, not yet joining up with each other in obvious ways.

The first four episodes run through December with the latter half of the season sometime in 2021… scheduling that probably won’t help the connective tissue the show needs to work at its best. How satisfying you will ultimately find Pennyworth as ever depends on your individual tastes. There’s still little of Batman‘s world here for the purists, but plenty for lovers of good drama and alt-history to get their teeth into. How those various elements – political, social and just slightly fantastical – fit together (as a story in their own right and much later into the Batman mythology) will be the predicament that the show once again faces: when to hold, to fold, to walk away or to run. It’s one thing to have all such considerable talent involved in the show (including writer and show-runner Bruno Heller and now veteran director Danny Cannon) it’s another to execute everything into a truly satisfying ongoing whole.

There’s just SO much potential here, it would be a pity if it didn’t come together as the sum of the parts. 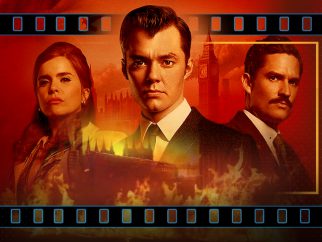