It's a case of cosmic 'humblebrag' as Burnham is asked to speak truth unto power. But whose truth?

If the Federation is going to be able to fully triangulate the source of the legendary ‘Burn’ that prevented warp-drives working, then they will need the results of a long-range scanning results that were based on the planet of Ni’var.  The problem is that the planet is no longer part of the Federation after circumstantial evidence pointed to their possible culpability in the incident itself, made more complex by the Federation originally insisting their dangerous experiments continued against domestic unease.

But Ni’var was not always known by that name… it was once Vulcan and now the planet is shared, if sometimes uneasily, by once-mortal enemies the Vulcans and the Romulans, brought together by a unificaiton process ignited centuries before by a man named Spock.

Given that Michael Burnham was Spock’s adopted sister, she may be in a unique position to negotiate access to the results. But she can also be her own worst enemy and to be successful on this mission, she may have to be overcome her own impulses…

One of my frequent criticisms of Discovery is the tendency to make Michael Burnham (Sonequa Martin-Green) the element around which everything else pivots, a glisteningly-eyed rebel who repeatedly saves the day but does so with great recklessness. So it’s interesting that the latest episode goes far down that rabbit/worm-hole simultaneously self-criticising and embracing those issues while also proving a passionate love-letter to multi-generational aspects of the Trek franchise.

As well as glimpses of Discovery‘s version of Spock from last season, the Romulan ‘Qowat Milat’ (the order of warrior-nuns seen in the recent series of Picard) and even some references to events mirrored in the J J Abrams timeline ( and a subtle tribute to late Trek actor Anton Yelchin), there’s a throughline to the classic two-part Unification story of the Next Generation era. This is a wholesale sequel to that in title and execution. Footage from Leonard Nimoy’s appearance in those episodes and references to Jean-Luc Picard are on show and the lineage and legacy is deliberate and unapologetic throughout. The chance to build on those important parts of the Trek mythology is an opportunity that is not wasted – what could easily have been a lip-serviced ‘stunt’ episode instead embraces some of the true impact of Spock’s historical attempts to bring the Vulcans and Romulans together and gives them the success they deserved without making it pristine and uninteresting. The somewhat bristling accord and d’accord between the two races – now inhabiting the same renamed planet – is realistic in its complexities and while the initial decision for them not to hand over invaluable information to the Federation (that might exonerate them from having anything to do with ‘The Burn’) might initially feel like a plot-contrivance, it actually makes perfect sense when it comes to matters of trust and pragmatism. Those are, after all, factors ever front and centre when it comes to Vulcans.

In an outing that really doesn’t have a single ‘action’ beat in its running-time, it’s a walk-and-talk of Aaron Sorkin-esque proportions that proports to be an effort to obtain and consolidate knowledge about ‘The Burn’ but is really about the ties that bind… and, yes, giving Michael Burnham some long-overdue hard truths. (Less a ‘Burn’ and more a “Roast’, perhaps?)  That all being said, the episode is Burnham’s more frustrating traits both on steroids and under a microscope. There’s speechifying, narration, impulse-control, petulance and tears in abundance  – all of which work well enough in context but might have worked even better if they hadn’t proven a weekly staple leading to this. In allowing Michael to tilt towards those touchstones and then calling her out on all of them, the series somewhat has its cake and eats it… this time she is the only person who can do the mission on which the galaxy’s fortunes rest, but she has to be unnaturally humble in the effort to be successful.  Like the Doctor Who episode Moonlight (in which Tennant’s Doctor finds his innate power of words used against him by a small group of people who distrust his eloquence), it’s time for Michael to face home-truths that aren’t always comfortable to acknowledge – the least of which is that she’s hardly the best example of every collective Federation value she’s been asked to display. Essentially, she’s a non-team-player acting as a team-recruiter. She has a tendency to act at warp-speed on her impulses and lie to herself about the reasons she takes the risks and Unification III attempts to find the honest balance between heroic rebel and mere martyr-complex. If Michael and the show’s writers learn from this episode’s outcome and try to subsequently dial-back the tendencies to make Burnham the cure-all in what has long-since become an ensemble show, full of equally interesting and resilient characters, then it will make Unification III an important chapter above and beyond the obvious. Then again, Michael has had wake-up calls before and reverted to form, so we’ll see have to see if it sticks.

The one thing that perhaps doesn’t work so well on an internal-logic level is making Burnham’s long-lost mother Gabrielle (Sonja Sohn) her appointed advocate. Quite how the person who is largely responsible for the events that catapulted them all to the 32nd century ends up being a legal representative on Vulcan/N’varr at just the right time and place to encounter her daughter is a convenience of cosmic proportions that seems merely designed to quickly tie-off a lingering thread from last season in the most unlikely way and free-up Burnham from her occasionally-mentioned search. But it’s a niggle rather than a fracture in the story.

The ‘B’ story is Saru’s decision to offer Tilly (Mary Wiseman) the second-in-command position. In many ways it’s utterly unbelievable that a character who was designated an ‘Ensign’ at the start of the series should be able to high-jump into such a position in one swift move, but on the flipside she is, in many ways, the heart and soul of the ship – a sunny optimist with no illusions of grandeur  but with a moral core and one who has saved the ship on a number of occasions. The fact that, after sharing her disbelief and surprise, her friends and colleagues insist she takes the job and has earned it, is a testament to the camaraderie and sense of family that Burham sometimes subverts.

A strong episode, then, blueprinted for the long-term Star Trek fan and one that builds on the strengths and weaknesses to date in a way that promises much going forward. 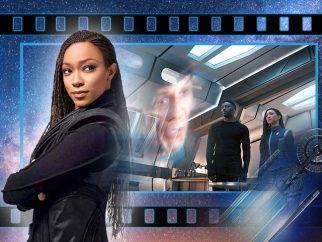