Discovery and its crew finally reach the secret Federation enclave and are met with both scenes of wonder at how far technology has progressed and an icy pragmatism from the surviving Federation as it assesses whether the newcomers are a danger, a liability or merely the flotsam of antiques.

When members of an alien race on the hub are struck down by an illness, Saru and Burnham suggest to the Federation’s commander Admiral Charles Vance (Oded Fehr) that the Discovery’s Spore Drive, giving it far better range than any of the future starships, would be the ideal way to retrieve a possible cure. Vance is initially wary of the offer but Saru and Burnham try different ways to persuade him.

But even if they succeed, do they have a place in this new order and, if so, will they like it?

It’s five episodes into Star Trek: Discovery‘s new season and we’re finally getting an idea of the more formal, new status-quo going forward. While the Federation and Star Fleet have been spoken of in almost mythological terms thus far, Die Trying is the moment where we get some definitive, if not wholly complete, ideas of where things are in the 32nd Century. It’s interesting to find a Federation in the state it is – technologically doing very well, but far smaller, cautious and inward-looking, having no real time for the simple act of exploration after the ‘Burn’ event (still something of a mystery) literally decimated their number – reducing the number of member planets from over 300 to barely 30.

With a touch of TNG‘s classic episode Relics, though in reverse, we have a situation where our key characters are finding themselves way behind the technological and chronological curve. Yes, the Discovery is a unique starship, but in many ways it’s utterly outclassed by every other starship hidden in the Federation enclave (including a ‘Voyager’ and an ‘Eisenberg-class’ ship the USS Nog named in tribute to  the late actor Aron Eisenberg who played Nog on Deep Space Nine). Though he’s brusque and aloof, Oded Fehr’s Admiral Charles Vance isn’t exactly wrong when he questions Discovery‘s legitimacy (they don’t appear in any records) or practical use in this brave new, desperate world that’s already got tech that’s almost literally light-years ahead. Of course, Discovery‘s Spore Drive is its defining feature and saving grace – providing a solution to the Federation‘s of warp-speed ability – but Vance , again pragmatically, wonders why he should keep all the behind-the-curve crew together rather than spread them across the fleet and then simply try to duplicate the Spore Drive with the 32nd Century tech now available. It’s Burnham and Saru that manage to convince him that it’s better to have a field-tested, experienced crew at the helm of Discovery than to spend time training up a new one – though one wonders if that would stop them actively working on such a blueprint for a duplicate craft when the immediate time-sensitive mission is over.

But one of the real highlights is the sequence of tight, two-hander scenes between Michelle Yeoh’s Georgiou and  – making a rare screen appearance – legendary director David Cronenberg as ‘Kovich’. Their back and forth across an interrogation/debrief table is a masterclass in verbal sparring, diffident, casual and sharp with neither side giving anything.  The rapid blinking that confuses and defuses the AI assistants is a lovely idea and it shows what can be done with minimal effects and a strong concept. It’s also scenes like this, going beyond the usual one-line snark or physical action and show just how deadly Georgiou really is as a character (though there’s hints there’s more going on after the encounter than even she may realise).

Looking for solutions, Saru gets to play the inclined-to-be-a-diplomat and Burnham’s first instinct is to rebel. It will be interesting to see how they both react to what is essentially a new command structure that outranks them both. Again, the script also writes in a now contractual weekly reason for Sonequa Martin-Green’s Burnham to become misty-eyed (in this case over leaving Rachael Ancheril’s Nahn behind when she decides to become the new guardian of a cosmic seed bank). Nahn’s Bazarn culture is used and name-checked, particularly in its beliefs about death, but it’s little more than lip-service to drive the convenient  ‘mission’ part of the story and it’s a shame we won’t get more chance to learn about it or explore an often-neglected character since she joined last season.  Emily Coutts’ Detmer continues to react unevenly, but it’s still likely this is a responsible way to cover some kind of ongoing PTSD (neither down to an alien influence nor shrugged off as a one-off story-element) and there’s coverage for the rest of the crew as we see their reactions (Stamets, Reno, Culber all have their moments) and Sara Mitich (who originally played the doomed Airiam and now essays Lt. Nilssen) seems to be getting more camera coverage – if not more actual lines – so will she perhaps step into the role vacated by Nahn/Ancheril?

A solid enough episode that introduced a lot of new ideas and developed older ones with Easter Egg references galore to old Trek shows  and the inclusion of a lullaby that you just know is going to resonate as a story-point later… Discovery was always a show that wasn’t quite rising to its potential, seemingly unsure of which star to tilt at – but it’s now improving and going boldly and better a little more each week. 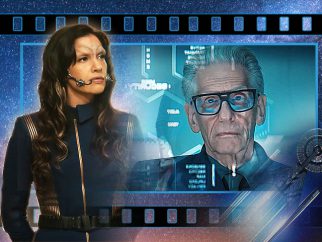