Swapping sand for ice, there's still no shortage of haulage problems for 'Mando' and Co....

Mando is still pursuing details of where he might find his comrades in an effort to locate the baby’s homeworld and he accepts the job of helping a ‘Frog Lady’ head to the next star-system in return for information. The problem is, she’s carrying her spawn and can’t travel at light-speed, so it will be a slower and more dangerous journey for them. Mando’s ship ends up being tracked by rebel patrols, but will his fancy flying be enough to get them out of danger.

On and below an outlying icy world there are other dangers that the travelers must face… and that’s not even taking into account the rather unfortunate appetite of a certain small, green creature…

The second episode of The Mandalorian is entitled The Passenger and deals with exactly what the title suggests – and as with all jobs, having a live cargo leads to no end of trials and tribulations. This is another example of an efficient show telling a familiar story. the internal technology aspects vary in success. Certainly Mando’s ship, the Razor Crest, must now be a luckier hunk-of-junk than the Millennium Falcon, having being battered, attacked and blasted and yet still capable of being patched together enough to keep flying. This episode sees some more stressful flying and forced ‘landing’ through an ice-shield, leaving more holes than ever and it’s frankly ridiculous it could ever take-off again… On the other hand we’re so used to universal translators in sf, that it’s somewhat refreshing that Mando’s latest passenger is, at least for the first act unable to explain her full predicament without the aid of a third party that can bridge the language gap. Though salvaged robo-parts briefly and conveniently help to give her backstory a voice (wryly provided by none other than Richard Ayoade reprising his ‘Zero’ vocal duties), it’s an essential part of the over-all tale that there’s a lack of decent communication.

Misty Rosas plays the Frog Lady passenger in question, though as with Pedro Pascal’s title role, it’s hard to know the extent of the contribution when there’s no face to see. That being said, Rosas has provided different characters for the show in the past, mostly through motion-capture which is a skill in and of itself. (Veteran voice-performer Dee Bradley Baker gives the Frog Lady her native tongue before translation). Kim’s Convenience actor Paul Sun-Hyung Lee and Star Wars series writer/producer/director  Dave Filoni (Star Wars: The Clone Wars and Star Wars: Rebels) play X-Wing fighter pilots. The dogfight between Mando’s ship and the X-Wings is worthy of the cinematic franchise and shows just how well television can match the big-screen when given the time and budget…

Despite the hints of innate power last season, Baby Yoda causes no end of trouble (actually eating some of the ‘cargo’ and waking a major threat) and offers no solutions or real aid. However, despite him/it being more of a decorative factor, there’s a certain joy in seeing the evolving ‘Alienesque’ tribute sequence where the little green creature encounters a cavern of eggs that inevitably ‘hatch’ into spider-like creatures intent on death and destruction (the creatures, called Krykna, were first seen in Star Wars: Rebels).  Their design ultimately feels more family-franchise/Lucasfilm friendly than their acid-bleeding cousins, but  it works well enough as a set-piece.

There visual qualities remain unsurpassed, but there definitely feels like there’s a template formula developing with a ‘big monster of the week’ scenario amid different elemental backdrops (last week was sand, this week was ice and by the looks of things, it’s the high seas for the third episode of this run). It’s all executed well, albeit with a familiarity… enough to keep you watching and with potential to be truly great if they can instill a real sense of emotional connection rather than just dazzling graphics. 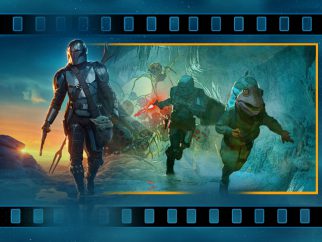