Marshal Lore: ‘Mandalorian’ has a hard day’s knight on Tatooine…

If ‘Mando’ is going to be able to get his young companion back to his own kind, he realises he’ll need help. Word comes of another Mandalorian soldier in the backwater Tatooine town of Mos Pelgo and so that is the next destination. But on arrival, it is quickly established the town’s marshal is not actually one of the order, just a man named Cobb Vanth who obtained the armour from a bunch of Jawas.  Not keen to give it up, a bargain is truck… if the two armoured warriors can help stop the incursions of a giant ‘sand dragon’, then Vanth will give up the armour without further bloodshed.

And, hey, whose armour is that, anyway?

If its western sensibilities hadn’t already been firmly established in the first run, then the sight of ‘Mando’ slowly gliding through a backwater Tatooine town on his speeder bike (instead of a trusty steed) as settlers and disgruntled, distrusting townsfolk stare out from doorways and windows of a misbegotten outpost and as Sand-people threaten raiding parties, would surely have sealed the deal. There’s also familiar echoes of a knight’s quest with dragons, quests and Timothy Olyphant cutting every inch a mixture of wayward law-officer (again!) and Don Quixote-esque figure.

The appearance of giant sand-worm, terrorising the outpost feels more like something out of Dune or Tremors on a Lucasfilm budget, but the beast’s early appearance and then the explosive climax serve as nice set-pieces and establish an outside threat, an impressive piece of CGI and a reason for two characters to work together. It’s plot may be bite-size but it’s every inch cinematic in quality and visual scope and underscores the investment made in the production from start to finish. In most shows, one would be tempted to presume there’s been a big splash of extra-budget for this relaunch but with Lucasfilm and Disney+ there’s certainly a possibility it will continue which is good news.

Baby Yoda, perhaps surprisingly given its meteoric merchandising success, is little more than a prop to the story, sidelined for most of it and only occasionally appearing with its big eyes and comedically cute timing to remind people that Christmas tie-ins are already on sale.  There was a moment during the last run and since that the diminutive creature looked to overshadow the Mandalorian branding itself and it’s a feather in the cap/helmet of the show that it didn’t rest on such laurels or use it as a crutch for its opener.

Timothy Olyphant’s Cobb Vanth makes an interesting addition to the story (though die-hard fans will recognise the character and even some important connective-tissue from several Star Wars novels which set up the ‘marshal’). He’s a person who took advantage of a power-vacuum to get rid of others who technically did the same thing, though with Vanth it seems just a tad more pragmatic and well, yes, Justifiable than actual profiteering.  Of course, anyone with even basic knowledge of Star Wars will also likely recognise the armour that Vanth is wearing, looking every inch like that of Bobba Fett (last seen being swallowed by a Sarlacc pit in Return of the Jedi) and with the inclusion of Tatooine, it was clear that it’s no accident or mere homage. Though it might be lost on new devotees, the closing moments of the episode also seem to formalise an aspect of the original Star Wars trilogy lore as official canon rather than speculation, though we’ll see if that’s explored further.

It will also be interesting to see if those Mandalorian helmets remain in place. Though we were given to believe that they were held on with superglue and Judge Dredd-like stoicism, we’ve now seen two key Mandalorian figures sans headgear (through Pedro Pascal’s reveal last season seems wasted on an anti-climactic moment), so how important an element that will continue to be remains uncertain. As with all shows, the final verdict must come later when there’s more episodes by which to judge the production – the first run being very uneven, a successful tribute show with outstanding effects but nothing new on a narrative level –  but this opening salvo for the second season is a confident, easter-egg-full but  notably standalone step in the right direction. 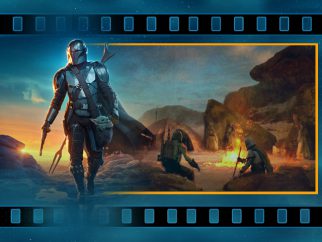