Star Trek – Discovery is ‘Far from Home’ but back on course..?

A welcome return for the main 'Discovery' crew balances out the first episode solo-mission...

The Discovery and Michael Burnham have been separated as they are buffeted by the forces of the wormhole. There’s no way to know the time or distance that divides them, but for the moment, it looks as if the ship’s arrival in the future will be short-lived, if it can’t get its systems back online and it’s journey to the surface of a nearby planet slowed.

And even when skill and luck assures their survival, there’s the difficulties of dealing with casualties, injuries, repairs and supplies. There’s disagreements about priorities, but getting power back to the damaged ship seems a priority.  There appears to be life out there, albeit keeping its distance, but what will prove more deadly, the local inhabitants or parasitic ice?

Zareh: There was no trace of your vessel in our databases.
Saru: We are an older model.
Zareh: Aren’t we all?

There is a solid argument that the second episode of Star Trek: Discovery‘s third season is a better paced and more satisfying entry than the first episode. Though Green’s Michael Burnham is the de facto central character of the series, if not in the command-structure itself, Discovery is infinitely more satisfying when it doesn’t simply pivot around her but instead gives solid time to the rest of the crew. Far from Home essentially rebalances the scales from last week’s Burnham-centric outing (which had nary a sign of the crew) and fills in some of the blanks as to what happened to the starship when it emerged from the wormhole into times and territory unknown.

We’re straight down to business with most of Discovery‘s systems down and mere seconds to prevent the ship being vapourised or being destroyed by interstellar debris. In that sense, we’re starting at a similar point to Burnham’s predicament, but with all hands on deck, the ship manages to make a successful, if inelegant landing on a nearby planetoid, niftily avoiding gravity-defying rocks but coming to rest in a patch of parasitic ice.  The show now goes through reminding us who made the trip and their current status-quo: basically…. in bad-shape. Stamets (Anthony Rapp) was already severely injured prior to the trip and his husband/doctor Culber (Wilson Cruz) assures him he’ll make it but will need recovery time. It’s good to see a loving relationship back on course, one that is deservedly representational of LGBT progress but which doesn’t seek to portray it as anything more or less important. That recovery time largely goes out the window when Stamets is needed to help Commander Reno (Tig Notaro) get power back to the main systems. The wry, dry banter with Reno as always a highlight if only by creating perfectly-tuned sarcasm into dry technobabble.

Doug Jones continues to demonstrate why he’s the king of prosthetics, able to consistently infuse Saru with a distinct nobility despite the levels of make-up. Tilly (Mary Wiseman), sometimes played as a well-meaning ditz, gets to show a more tempered-side and there’s some truth to the touching moment when she asks Saru why he’s asked her of all people to come with him to find supplies and he answers: “We are introducing ourselves to the future. You, Ensign Tilly, are a wonderful first impression…” (Or, at least, not too overtly dangerous, though she’s proven herself several times over).

At the other end of the emotional scale Michelle Yeoh’s Georgiou is as snarky and self-serving as ever, though seems more interested in finding Burnham than anyone else (which feels off). Yeoh can always be relied upon for more physical roles and the actor dispenses with the more diplomatic protocols by dispensing with her enemies in more practical style – but not before taking several phaser-shots to the chest which must have at least bruised a bit. Hopefully the show can develop a balance – because while it’s always good to see Yeoh in action, she needs to be more than a foil. Elsewhere, Lt. Detmer (Emily Coutts) has mostly been bridge-filler in previous seasons but it’s largely down to her quick-thinking that anyone’s still alive and though there’s some foreshadowing that she’s not completely fine afterwards, it’s good to see what will hopefully be more interest in the supporting character. Guest-star Jake Weber  (probably best known for his role in Medium) makes a confident if low-level adversary as Zareh, basically a local enforcer who relies on his ability to read people well and then intimidate them. Until he meets Georgiou, that serves him well and he quickly becomes a character we’d like to see get his comeuppance – the fact he actually isn’t seen to die perhaps bodes ‘well’ for an inconvenient return somewhere down the line.

It’s true that the show may have been propelled into the 32nd Century but still faces some rather familiar set-ups and tropes (last week a glossy turn on Star Wars‘ Mos Eisley, this week a more western theme complete with ‘saloon’ motif). In many ways it’s been given a superficial wash-and-brush-up rather than reinventing the wheel/warp-drive – perhaps even a nod to classic Trek, albeit with a bigger budget. But the camaraderie is good and, as always, it will be a matter of time as to whether the story-plotting gives the crew and cast the fuel to boldly go and move significantly  forward. It needs new challenges, a status-quo where familiar and convenient solutions and new backdrops aren’t enough. So far, it’s entertaining but not essential and it would be a real shame not to rise to the new opportunities and potential that the drastic scene-shifting has presented. 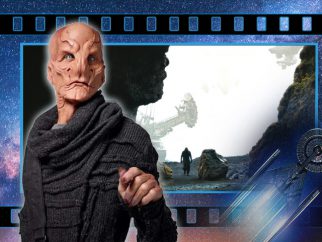 Quibi calls it quits – Bite-size platform to end in December…