Netflix's much-anticipated 'Haunting of...' mini-series is a different beast to the first acclaimed run...

London, the 1980s… American Dani Clayton is looking for reasons not to return to the US and answers a newspaper ad wanting an au pair. Businessman Henry Wingrave is not that impressed with her, but she’s not too impressed with him either. Despite that, she gets the job and travels to the rural Bly Manor to look after Henry’s young nephew and niece Miles and Flora. They lost their parents in an airplane accident and their previous au pair disappeared the previous year and there are those who think the latter could be linked to the vanishing of Henry’s assistant who had sticky fingers and few sympathisers.

Dani finds Miles and Flora to be initially charming but high maintenance, in some ways very young and in others wise beyond their years… not surprising with the traumas they’ve been through.  But she grows to like them and finds kindred spirits with the likes of Owen the cook, Hannah the house-keeper and Jamie the gardener who each have their own secrets and stories to tell.  But Bly Manor has its own secrets that only time will reveal and Dani will find that before she can confront any of the darkness that appears to be rising their, she’ll have to defeat some of the things that haunt her first…

The Haunting of Hill House was a masterpiece of tension and blueprinted palpable unease, an almost perfect blending of top-tier ghost story and family dysfunction, that rare kind of treat that invites and even demands repeat-viewing and rewards the viewer with new details and admiration for its obvious pre-planning and construction.  The Haunting of Bly Manor, released onto Netflix this week, is connected to the previous series only by its creative personnel and the return of a raft of its central performers – all in totally new characters in a new story. Loosely based on another classic tome, Henry James’ Turn of the Screw, the nine-part follow-up is branded in a similar ‘Haunting of…‘ way for convenience but it’s something of a subtly different entity.

The first episode of Bly Manor is, to be truthful, not as scary as you might expect and though there are spooky twists, restless spirits, sudden shocks and turns of the screw  a’plenty as things proceed, it’s an observation that remains true throughout the run. Or, at least, not the cold-sweat dread for which you might have readied yourself. In fact, there’s a line much later that says “This isn’t a ghost story, it’s a love story…” which rings even more true by completion…. Bly Manor is about love and the ties that bind us in all forms – from unhealthy obsession to selfless sacrifice, from ethereal regrets to earthly promises and it weaves them together quite well, if not always evenly. Yes, echoing Hill House there will be those who initially scour the backgrounds for details and clues to the developing bigger picture (they are there to be found in abundance should you wish to freeze-fame elements of most episodes – but most of the story is there in the foreground and while Hill House was a swiss-watch of ambition and precision, Bly‘s spirits and story are more loose and free-flowing. This time, the over-all structure is still significant and important in its own but different way –  its moments of strength are in the perceptions of the characters, not the audience. That being said, an expansive monochrome historical detour in the penultimate episode feels like it could and should have been sprinkled throughout the run rather than the late-in-the-day backstory it provides all in one go.

Mostly set in England in the 1980s, there’s a range of accents from the cast, some working better than others. Carla Guigno’s book-ending narration as she begins to weave her tale at a wedding rehearsal is hit and miss, clearly trying hard but fluctuating between northern and southern cadences which probably won’t bother US audiences but might frustrate those in the UK. Henry Thomas makes a more consistent London businessman in search of an au pair for his children and the kids themselves speak in clipped tones that immediately feel written for older personas. It’s that vocal bridge between source material and dialogue that sometimes proves distracting in early episodes. The original Henry James novel was set in the 1800s and there are moments where the script leans in that direction while at the same moment asking us to embrace an 80s soundtrack and fashion. In some scenes that deliberately adds to a sense of ‘wrongness’ but it takes a while to accept before it settles in.

Victoria Pedretti, who played the tragic Nell in Hill House is once again the emotional pivot of the piece and now an expert at walking the line between barely-restrained subconscious terrors and steely determination to be an anchor for those around her… but as au pair Dani she is trying to be the mystery-solver than the mystery itself. She’s still called on Jennifer Love-Hewitt-levels of watery eyes and lip-quivering at which she gets no end of practice. T’Nia Miller as house-keeper Hannah is arguably more the lynchpin of the story for reasons you’ll discover in the latter episodes and the performance is probably the most subtle of the talented ensemble. Rahul Kohli as the cook Owen also proves to be the guy you’re rooting for and the most sympathetic.  Amelia Eve  as Jamie the Gardener  is also a slow-burn character that audiences will like, though perhaps less-developed as a character than she could be… and feeling more like a Noughties archetype than an 80s.

Even if it doesn’t quite meet expectations and preconceptions, Bly Manor is still another feather in the cap of series creator Mike Flanagan – a writer/director who may be far less flashy than some of the current horror auteurs but is arguably a steadier hand – and there’s a very good chance you’ll come away wholly impressed if not for the reasons you expect. It’s certainly not flawless, this time the pacing and seams just a little off, but this is still a superior manor with many storeys and rooms full of atmosphere. 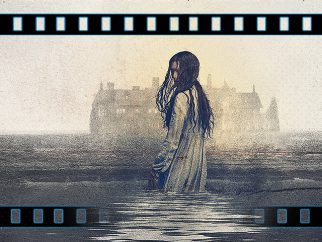