The new 'Walking Dead' limited series 'World Beyond' debuts - and immediately aims for a younger demographic...

The world has gone to hell, but not everyone has had to endure the same hardships as others. Behind a massive fortified Nebraskan campus a community full of young people – some of whom barely remember the world before – are not quite thriving but certainly surviving. They can’t go beyond the gates but only a  few of them want to.  Hope and Iris miss their father who has been whisked away by an alliance of communities known as the Civic Republic and though they know his scientific expertise may be essential to finding a cure, they react very differently to innate doubts about his safety.

A visit from a Civic Republic representative, Elizabeth Kubleck, does little to placate their fears, even at a time when the alliances are supposedly being tightened. With further worries about their father’s true safety and a map that may lead them to him, Hope, Iris and two other students – Elton and Silas – decide to get away from the compound and head towards New York.

Early word on the latest Walking Dead spin-off painted it as anything from an abject failure to simply a change of pace. There’s a certain truth that World Beyond won’t appeal to all fans of the ‘mothership’ and that in a week when The CW‘s show The 100 (full of young, attractive people trying to survive a barren world) departed screens after five seasons, the AMC‘s launch of World Beyond fills a particular gap in the scheduling.

While we’ve got used to our Walking Dead heroes rolling around in the dirt, covering themselves with entrails and surviving hordes of the undead, there’s a certain attitude-adjustment needed to accept the opening salvo here. Images of zombies crawling towards you with cartoon-like animation superimposed on them… a main location that’s more like a ivy-league campus than a beleaguered, fortified homestead… a cast who all look barely half the age of Daryl, Carol and co. None of these elements will reassure the party-faithful that this is a show that is any more than an opportunistic grab for a new demographic.  And yet the first hour of what is being marketed as a two-season limited series, should probably not be solely determined by those factors alone. The prism through we’re seeing these events may be younger eyes, but there’s clearly been some backstory and decent ideas considered during its development. The first TWD spin-off, Fear the Walking Dead, introduced ideas of other power-structures and conflicts being created over the horizon and with these new and announced projects, there’s obviously been an attempt to expand out the post-apocalyptic world beyond Georgia’s borders.

It could have been interesting to see how the campus-artifice begins to crumble, the ‘safe’ world that many of the kids have enjoyed being deconstructed. However apart from a worrying cliffhanger that suggests the venue’s disposable day-players might have got that judgement  sooner than expected, World Beyond looks like it’s set to emulate the original’s format of having a small group work their way through the wilderness, fully un-equipped to deal with the unfamiliar threats that await them.

Our main characters are Hope (Alex Mansour) and Iris (Aliyah Royale)  the two daughters of a scientist who is ‘away’ at another unknown facility ‘helping’ in experiments to find a cure – perhaps under duress. The former is an agitator, tired of following the rules and willing to rebel against anything she sees fit, the latter a more savvy and trusting strategist who isn’t naïve enough to think everything’s rosy but thinks it’s far better to tread very carefully and not rock the boat unless needed. The two unlikely-looking siblings provide the necessary two-counterpoints needed for some drama and friction but are close enough to work together, and complement each other if the situation arises. It’s a well-trodden, familiar trope but the two actors largely make it work with the script they are given. Two other students, the nerdy but smart Elton (Nicholas Cantu) and Silas (Hal Cumpston) are the two other students introduced to begin the quest with the sisters, though in the first episode there really isn’t a massive imperative for them to do so – merely the script needing a couple of other archetypes to tick boxes.  An unknown in/convenient connection between Elton and Hope’s backstories indicates there may be some drama down the line, but otherwise, they’re far les developed in the pilot than they should be. Nick Tortorella, who identifies as non-binary plays Felix, assigned to protect the girls on the campus and then finding the job even more difficult after their escape. There’s dialogue indicating the character may be gay, but it’s largely irrelevant to the wider plot.

Julia Ormond is pretty effective as Elizabeth, the incoming representative of the Civic Republic, an organisation that is seeking to unite or literally ‘helicopter’ parent the various enclaves and which states it has a altruistic intent but supports that with storm-trooper like efficiency when needed. Clearly a character you’re meant to distrust from the outset, there are, nevertheless, scenes which indicate that it’s currently impossible to see her complete agenda. One minute she’s been crisply forthright, the next seemingly understanding and while you can’t shake the feeling every action and reaction is a means to an end, it could be interesting to see that game play out – especially as it may tie-in to the bigger landscape of the TWD-mythology planned as we move forward.

Essentially, the opening episode, Brave, does what’s needed – laying the groundwork and introducing the cast. You don’t have to be familiar with the ins and outs of the two existing shows (and if you are you’ll likely to see some of the connective tissue and have to excuse the basic mistakes the characters make along the way as they tread in their footsteps) but it paints another piece of the canvas, albeit in slightly more vivid colours and buoyant style choices. World Beyond, limited to those two seasons – may prove a better bridge than new foundation but could be worth seeing how it navigates the terrain.

And at a time when kids are feeling invulnerable in a world gone mad,  it could actually be more prescient than it was ever intended. 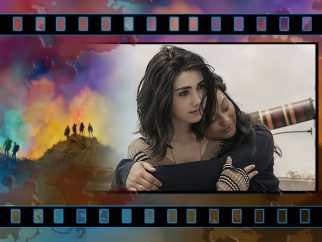