There's little more than nostalgia and goodwill in 'Face the Music' but it might be just the antidote to a bittersweet 2020...

It’s Sam Dimas, California 2020 and William ‘Bill’ S. Preston Esq. (Alex Winter) and Theodore ‘Ted’ Logan (Keanu Reeves) leave couple-of-couples therapy with the princess wives only to be informed that the efforts of the two previous films have yet to produce the song that would unite the world. That’s an urgent problem because they now have less than 90 minutes to write the song and perform it or the very nature of reality, time and space will be torn asunder as every era collides with another.

Bill and Ted are at a loss – their days of needing to turn in history papers are long gone, but so is the huge success of their band  Wyld Stallyns (even Death quit the band). They decide that if they haven’t got enough time to find the winning song, they can still travel into the future and find a future version of themselves that did and simply retroactively borrow it to perform themselves. Unfortunately few versions of their future selves actually want to co-operate, especially as in their current timeline, Bill and Ted’s oblivious nature has led to their respective wives leaving them.

But Bill’s daughter Billie (Brigette Lundy-Paine) and Ted’s daughter Thea (Samara Weaving) also acquire a time-travelling vehicle and start heading backwards and forwards across the timeline to find the musical greats that can perform a new classic when their fathers return.

To complicate things, a robot from the future has been sent to kill them – and he’s causing more damage.  It looks like the chances of saving the universe are going to Hell…

1989’s release of Bill and Ted’s Excellent Adventure ultimately became more than just a box-office hit and moved on to be a bonafide cultural success – it’s good-hearted journey through time with two well-meaning but intellectually-challenged heroes trying to pass their school history test, struck a chord that produced a sequel two years later and remained on the nostalgic play-list ever since. It made a star out of Keanu Reeves and further highlighted the talents of George Carlin in an acerbic but more family-friendly environment than his more ‘mature’ audiences. Along the way they were joined by the likes of William Sadler, Joss Ackland, Pam Grier, Jane Wiedlin and Al Leong. The idea of travelling through time in a telephone box might not have been unique but worldwide audiences enjoyed the ride.

Three decades on and a third film has now debuted online – bypassing cinemas for now due to the COVID situation but reminding the world that there are still movies to enjoy even if you can’t get to a multiplex. When the film was announced last year, audiences old enough to remember the originals initially celebrated and then wondered if it it would stand the test of time. After all, even air-guitars can fall out of favour. The much-copied comedy had struck gold, but was it remotely relevant in today’s less optimistic times?

The strange thing is, there is a lot of stuff here (or absence of it) that in different times might well lead to far heavier criticism than it does now. The story is undeniably paper-thin, more so it’s an unapologetic retread of what’s gone before. There are countless missed opportunities… it only rarely throws anything new into the mix, not even taking into account the contradictions of time-travel with which it could have had more clever twists.  After two films we know Bill and Ted, but though Brigette Lundy-Paine (as Billie) and Samara Weaving (as Thea) are fun and engaging in the moment, there’s no real character development here, simply the need for them to lightly mimic their on-screen dads. A sub-plot about Bill and Ted’s wives (whom they brought back from olde England in the first film) going on their own timey-whimey adventure to see how well/badly their marriages turn out, is given too much screen-time in the first act for what is subsequently reduced to cameos and a reason to keep them off-screen for the rest.

And yet…astoundingly not a bit of the above quibbles matters because the film is so pleasantly upbeat and full of quirky heart that you find yourself clutching it to you tightly and hoping it’s 2020 that’s the bad dream and that this crazy farce is the gonzo reality. It’s a film utterly devoid of malice and one which celebrates effort and heart rather than being too dark, cynical and smug – all too often the modern go-to’s for creators looking to be edgy.

It helps that the film knows its a tribute act unto itself, with Wyld Stallyns turning out to have passed their prime and been reduced to playing the theremin at weddings. Reeves and Winter play the characters as ever so slowly becoming more self-aware of that problem but always optimistically looking at the future as something they can salvage. However much older the two stars look (and it has been almost thirty years since their Bogus Journey in 1991) they and the film seem happy to acknowledge that and launch  in to proceedings with such innocent gusto that it pulls you along with them. The special-effects are fine, the supporting players all knowing their duties and all wrapped up in a running-time that’s brisk and to the point (and, unusually, might have benefitted form just a slightly longer ending).

If not completely ‘Excellent’ or ‘Bogus’, Bill and Ted: Face the Music strikes all the right notes, just not necessarily in the right order.

Bill and Ted: Face the Music can now be bought or rented digitally on Amazon, Apple, fandango Now, Google Play, VUDU or YouTube… 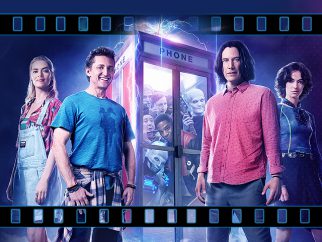