The original movie was a zombie classic with heart, the sequel is a well-rendered but silly, derivative action movie...

It is four years after a mysterious virus tore across Korea and left thousands either dead or turned into rage-filled zombies. The world has managed to contain the outbreak but large areas of the Korean peninsula are strictly off-limits and its escaped citizens are now unwanted refugees.  That is something of an inconvenience for a Hong Kong-based drug-lord whose massive stash of cash was just too late to make it out of the area and is now trapped in a lorry near the Incheon port. Only a fool would go back in, but with a deal to share the cash making everyone millionaires, it’s a tempting offer for the likes of ex Marine Captain Jung-seok (Gang Dong-won) and brother-in-law Chul-min (Kim Do-yoon) – who carry the guilt of surviving while their loved ones perished an d who agree to be part of the small team going in.

Getting into Incheon is easier than they expected, but things quickly go awry when the team is attacked by more zombies than expected. If that’s not enough, an enclave of survivors have created a base of their own, brutally dealing with anyone that opposes them and using survivors for sport.   Jung-seok a survives an initial encounter with them led by Sergeant Hwan (Kim Min-jae) and recovers with a family of survivors: Joon (Lee Re) who drives a getaway car with incredible precision, her younger sister, Yu-jin (Lee Ye-won), whose expertise is in much smaller vehicle control, their mother Min-jung (Lee Jung-hyun) and grandfather Elder Kim (Kwon Hae-hyo).

Their only hope of survival is to get the satellite-phone now held in the Unit 631 compound, alongside the truck and money.  But with the 631s, zombies and the duplicitous Hong Kong smugglers against them, there seems no chance of making it out alive…

If the original Train to Busan hadn’t been such a memorable outing, a refreshing breath of fresh air to a genre that’s otherwise all too often become a turnstile of putrid flesh topes and cliches, there’s every chance you could watch Peninusla as a genre-derivative guilty pleasure, neither offended nor particularly excited.  But as many will watch this ‘sequel’ because of the original it’s possible to predict a palpable sense of disappointment.

It’s not that Peninsula doesn’t have some fun moments, it’s that the most memorable ones here are unapologetically dug up from other movies and pieced together like some lurching Frankenstein’s monster in a movie made to cash in on the original rather than emulate its heart.  The central story of a small team going in to a dangerous area to bring back a hidden fortune is ripped entirely from the main plank of 1980s and 1990s movies too numerous to mention. The car/lorry chases through the streets are largely well rendered but absurd in a Fast & Furious kind of way as vehicles perform impossible turns, traverse magically clear/carnage-filled streets as necessary and survive crashing from overpasses. The bad guys have their ‘fortress’ with an ‘arena’ inside where they make prisoners fight zombies and you find yourself waiting for Tina Turner to ask what’s beyond Mad Max‘s  Thunderdome. Even one last minute chase is ripped from the Fury Road entry with cackling lackeys and vehicle-jumping stunts. As an all-out action movie, it’s all fine, if overtly familiar throughout, but if you came for the tension and humanity displayed in the original, it’s mostly lacking.

The hordes of zombies do remain scary en masse, at best in enclosed spaces. The film’s promising ferry opening once again creates the claustrophobic feelings of Train to Busan‘s carnage in closed-off areas and even after the action shifts to four years later and on to the ‘Peninsula’ of the title, they’re still a viable threat as they charge and scurry around and reach for you with crooked fingers and pointy , ravenous teeth.  But even then the film’s rules simply shift as needed. In some cases they are directed to the source of bright spotlights and flares and in others they are attracted to what the light is shone upon…whatever serves the need of the scene. It’s a minor, technical quibble in some ways, but noticeable in the final act.

It’s not that Peninsula doesn’t have some fun moments, it’s that the most memorable ones here are unapologetically dug up from other movies and pieced together like some lurching Frankenstein’s monster in a movie made to cash in on the original rather than emulate its heart……

Ironically, in going ‘large’, the film loses its scale – mistaking making things louder and bigger for better.  It’s a shame because there is a decent film in here trying to claw its way out and you see it in the earliest scenes and a few moments thereafter. Perhaps even more timely than originally anticipated we see western television networks musing about the original virus and its spread as some ‘Chinese conspiracy’. Anyone who’s recently played  PS4 games such as Days Gone or The Last of US 2 will be reminded of certain post-apocalyptic set-piece potential and the admittedly detailed backdrops, skyscrapers and alleyways crawling with things that will chase you down look promising. There’s also elements of humour with toy cars being used in genuinely imaginative ways as unlikely distraction to the zombies. they’re fun but yet another example of a tonal shift that’s all over the place.

The cast, familiar faces to Korean and eastern audiences for their independent work on screen and in the music industry, all do fine in their respective views and the film’s disappointments are in its story beats rather than the performances given. It’s just a pity they weren’t given the original film’s pacing, plot and script to work from.

Peninsula which is not quite a sequel and nothing like an equal,  feels shot, edited and marketed to appeal to the tropes and familiarity of international audiences. As a time-waster it’s fine, but anyone wanting to settle in for superior carnivorous fare should re-watch the original.

Train to Busan presents: Peninsula is on a very limited theatrical release given COVID, but will also debut on the SHUDDER platform early next year… 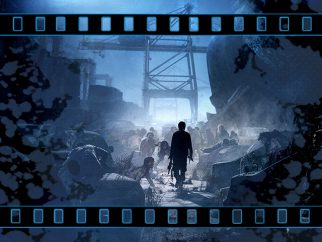