As everyone begins to assess who they can trust, it appears that 'The Universe is Indifferent'...

Melanie begins to realise her position of power is under imminent threat and starts to take desperate measures, using the young Miles as both a potential engineer for the elite quarters of the engine and as a lure for Layton. Layton himself  is busy making his own plans. He knows there’s almost no-one he can fully trust, but there are those whose influence will be useful if the revolution is going to succeed and the information Layton has could turn the tide in his favour.

The time is coming for outliers and those with (or without) their own moral compass to pick a side to stand on – but in an atmosphere ripe for revolution, one has to be careful how one cultivates friends and enemies with the briefest of words… and for some it may be too late.

“We have a duty to each other. And to the workers. And to the weakest among us… you just have to decide what’s right and wrong… it shouldn’t matter what the consequences are for you…” – Josie.

There’s a lot of moving parts in the latest episode of Snowpiercer, all functioning better than the hiccup in the hydraulics in last weeks’ entry. Unfortunately the outcome of the latest events doesn’t work as favourably for one of the key players as Melanie clings to power, but only just.

Writing out Katie McGuinness – and so gruesomely –  was something of a surprise but the apparent death of Josie was probably inevitable once she goes one-on-one, mentally and physically, with Jennifer Connelly’s Melanie Cavill (as the latter tries to force her to give up Layton).  First Josie loses a finger in a disturbing torture scene in which Cavill freezes off the digit and then smashes it to pieces… then, realising the stakes, Josie loses her entire arm to escape from her restraints. The plan to kill Melanie – and director Helen Shaver, an actress herself, knows how to present the battle in true, desperate, heroic manner – even at the possible cost of her own life, seems to be working until Melanie manages to get free and the room in which Josie is left alone is reduced to brittle ice.  In perhaps the most overt case of literal ‘fridging‘ in some time, it’s likely that her death will spur on Daveed Diggs’ Layton as the inevitable revolution grows imminent. The problem here, beyond the exit of a beloved character, is that it paints Melanie into a corner for the viewer. However good Connelly is – as she’s in fine form throughout – once a show makes a ‘villain’ do something so despicably bad to a ‘good guy’, then playing their nuances becomes difficult (it’s taken The Walking Dead  over three seasons to bring Negan back in to fan fold). The considerable efforts in humanising Melanie in the last few weeks – making her cold but occasionally tortured by her difficult choices – is almost for naught once she actually brutalises someone else. The show will face an uphill climb to make her as interesting if wholesale retribution isn’t in store.

Layton, already in possession of information that could bring Melanie down – hence her desperation – is now sworn to an ever-more personal revenge and has to decide how he’ll weaponise that knowledge and The Universe is Indifferent sees him testing the waters about who to bring onboard with his plan… and in the last scene we see him him pick an unlikely ally to do just that. Elsewhere both Beth Till (Mickey Sumner) and Ruth Wardell (Alison Wright) are changed by events in different ways – though Melanie’s actions and decisions are responsible for both – and it seems quite likely that Melanie ehrself has overlooked how important their support – or lack of it – may be. 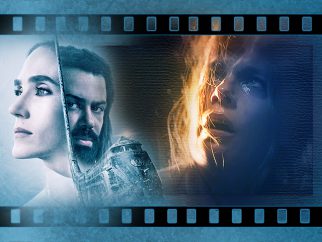