Layton finds the identity of the murderer on Snowpiercer, but who will end up on ice?

Layton’s investigation continues, but so do the killings and  the newly-conscious Nikki is found to have had that reawakening halted by a knife to the throat. But with movement between the carriages restricted after problems at the fight-club, the killer’s return to First Class is prevented and the net begins to close. However Layton is convinced that there’s more to it and starts to wonder if there’s more than one person responsible for the deaths.

Meanwhile the tail-section sees a rare opportunity to make contact further up the train and Josie takes a huge risk to make it happen.

But in an environment like Snowpiercer, who can be trusted to keep their word?

As oft-repeated, if you approach Snowpiercer the series as a world-as-microcosm social-studies drama and without the expectations of Snowpiercer the movie (or graphic novel) then it’s far more likely to be a satisfying, solid ride. Noting that the series lacks the urgency of the movie, it was presumed the murder mystery that kicked-off proceedings in the tv version would be the framework for the series entire, but by the time the credits roll on this fourth episode it seems like a significant amount of that is over – the culprit fortunately found and Layton’s mission to find a way to help the Tail at least coldly forestalled.  In many ways that’s something of a relief – many series have a habit of filler episodes to pad out a season and when it’s only a ten episode run, such efforts would show more readily (especially in what is already slower than expected). However given the season isn’t even half over yet, the fallout from the revelations and what follows will likely form the backbone of what’s to come and still lead to that promised revolution.

Acting-wise, we’re in solid territory with the upper-class portion of the train laying out like a classic Agatha Christie whodunnit with lots of word-play, while the tail-end is more espionage and spycraft as Josie (Katie McGuinness) swaps her temporary work-pass for an unofficial ticket to meet a contact further up the train and crank up the ‘will-she-be-discovered tension. Annalise Basso, only 22 but already a screen veteran, gives us a stylish performance as spoilt rich redheaded girl LJ Folger who has been more than capable of manipulating everyone out of spite or perhaps just boredom. The climactic dialogue between her and Diggs’ Layton works well as they explore what they have to trade and what each other wants and though it has a nice ‘gotcha!’ pay-off,  it doesn’t work out that well for either.

There’s also some good under-acting in the sense there’d a whole sequence where Layton and Melanie communicate, establishing the guilty party through nuanced eye contact – proving the maxim that it’s better to show than to tell.  There’s also some interesting development to Connelly’s Melanie herself…. until know we’ve seen her mainly on-duty or at least the trim, refined and resourceful host demeanor she shows to the main populace of the train. But we finally get a glimpse of her off-duty, dressed down and relatively relaxed with an almost contemporary look, giving us further reason to think she’s a multi-layered character capable of acting a role as needed, but with perhaps less reason to trust her – especially by episode’s end and her betrayal of the deal with Layton. It definitely shows her ruthlessness, not letting anything or anyone interfere with the deception that Mr. Wilfred is still the guiding hand.

Compelling enough to keep us watching, there’s certain quality on all levels, but the pacing may need improvement… 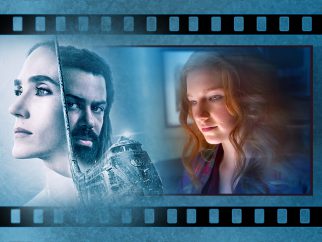