Westworld’s ‘Decoherence’ Therapy: Ed Harris is beside himself…

While the outside world appears to be in chaos after Dolores releases everyone’s private profile, William is undergoing his own trials and tribulations in a secure psychiatric facility… one that suddenly starts to feel less secure by the minute – but he’s going to have to face himself and some home truths to work out his own reality.

Meanwhile, as a new body is created for Maeve, her consciousness explores the virtual reality world again and realises that the only person she can get real answers from is Dolores herself. Elsewhere the Charlotte Hale version of Dolores is becoming less attached to the ‘bigger ‘prime’ plan and in touch with the late Charlotte’s original emotions. She begins to realise that she might be little more than a disposable asset.

Though there are a few faces missing from this week’s chapter (no sign of Aaron Paul’s Caleb), this is otherwise a far more balanced episode in sense of characters, many of them involved with self-introspection.

While definitely a case of ‘therapy?’ for several key players, there’s plenty of more kinetic set-pieces.  Following on from last week’s vehicular carnage, there’s a more high-action flavour with Tessa Thompson’s Charlotte Hale in particular looking like she’s auditioning for a Terminator movie in more ways than one. Hale’s attempts to leave the DELOS compound after her duplicity is discovered by Serac (and that was only a matter of time, wasn’t it?) get more and more intense with Hale/Thompson engaging in intense hand-to-hand combat (a scene inside an elevator is particularly impressive) and several shoot-outs worthy of the big-screen. As noted previously, Thompson has proven herself one of the major players of this run with a heavy emotional arc that now dovetails into more physical as the time passes. Another major player, Thandie Newton, also gets to display her full talents with an equal number of significant character moments and action set-pieces – in Maeve’s case it’s taking down a whole group of occupying Nazis just for exercise and then realising her considerable sphere of influence can’t reach everywhere or save everyone. The acting and fight choreography (and the way that Jennifer Getzinger directs) for both Newton and Thompson are highlights.

Of course, veteran Ed Harris is no slouch in the acting department either but though he skillfully keeps William’s psychiatric evaluations intense, the sequences come across as more arty and confusing than revealatory. It’s a great visual and  dramatic conceit for him to find a whole ring of his different outlooks personified in a circular therapy session (three Ed Harris figures – the Man in Black, the more civilised William and the now incarcerated William – alongside Jimmi Simpson’s younger version, whom we met in Season One without knowing the connection, and also William as a young boy played by Zayd Kiszonak). It’s supposed to be a way for him to come to terms with whom he is, and its compelling to watch… but if we’re being honest the viewer isn’t left with any clearer picture than when we started and his ‘rescue’ by Bernard and Stubbs at the end seems convenient. It’s like good arthouse theatre in motion.

Again, Westworld produces an episode that rewards the eye, ear and brain but only inches the plot forward slightly, pirouetting like a beautiful but cold prima ballerina… undeniably graceful but more a study in balance than momentum – no change, just the illusion of change, as Stan Lee might have observed…There’s very much a sense that in a season acutely about identity and free will in society, that the story keeps finding way to make various characters collide to see how they’ll react. (Sometimes those scenes are organic and sometimes less so – sometimes more engineered to show the differences in interactions for the sake of the compare-and-contrast narrative rather  than because the meetings are essential in and of themselves… nothing more than chess-pieces to shift hither and yon). Otherwise, the scenes where Hale is clearly distancing herself from Dolores’ main agenda and experiencing the innate feelings that she has for the ‘real’ Hale’s family probably put her more emotionally in common with the maternal instincts of Maeve, though you consistently get the feeling it’s not going to end well.

Long term fans of the show know there are more easter-eggs and visual clues than you could shake a host bunny at… and this outing is no different. If you can freeze-frame you’ll likely get an idea/name of at least one more familiar Host face that may yet appear and the book that Young William is reading (a created-for-the show tome called Sir Rowan and the Lady of Sulon) seems to offer some thematic ideas for a wider story about trust. There are also some links between the psychiatric scenes and images we saw in the season preview linked to Caleb – making it ever more likely than we shouldn’t trust Caleb’s memories which have already been shown to be contradictory.

Again, Westworld produces an episode that rewards the eye, ear and brain but only inches the plot forward slightly, pirouetting like a beautiful but cold prima ballerina… undeniably graceful but more a study in balance than momentum – no change, just the illusion of change, as Stan Lee might have observed. 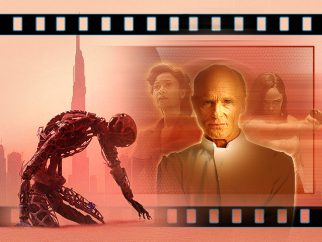