'The Winter Line' is coming... complete with nazis and dragons...

Maeve (Thandie Newton) has woken up in a setting that appears to be war-torn Italy and before she can figure-out how she got there, ‘Hector’ (Rodrigo Santoro) arrives to rush her to safety. However the Nazis that are occupying the area have other ideas and despite the couple’s best efforts their final escape is blocked and bullets fly. The next time she wakes up, she’s in the Delos repair facility, but still with unanswered questions. Even with the help of narrative overseer Lee Sizemore (Simon Quaterman), apparently recovering after last-season’s firefight, repeat visits to the ‘warworld’ offer only slightly different outcomes and only a few answers… until Maeve begins to suspect things are even more complex than they appear.

Meanwhile, Bernard (Jeffrey Wright) also heads back to Westworld, exploring previous landscapes and looking for a Maeve – and a way to check his own programming for signs of corruption. He finds Stubbs (Luke Hemsworth) and realises that he too is a Host, but even with their combined knowledge of the facility, will they be able to get in and out with the information they need?

Like the tactic often exhibited by The Walking Dead because of its expansive ensemble,  Westworld sometimes diverts episodes from one element in its  broader canvas to another… and so it is, in the second entry in the third season, there’s no real sign of Dolores or Caleb and very limited exposure to the ‘outside’ world that we saw to greater effect last week.

The episode is a delightful combination of several sf themes. Amid the Battlestar Galactica idea of a subversive synthetic rebellion, there’s the virtual-reality / simulations conundrums of The Matrix / Inception, a Groundhog Day motif as Maeve keeps waking up in ‘Warworld’ and a nod to The Terminator as a striding Stubbs goes medieval on the guards with a war-hammer that might be more suited to Luke’s Asgardian brother Chris.

Westworld can be so busy being ‘clever’ that it sometimes misses the humour, but there’s certainly some fun in the mix here, alongside the requisite misdirection. Though they turn out to be entirely simulated, the Warworld scenes bring to mind the somewhat discarded (and much-missed) original wish-fulfilment aspects of the concept and have a classic Hollywood OTT vibe as ‘Hector’ dashingly appears to rescue Maeve complete with vintage car and escape airplane (though, increasingly, Maeve’s the one who does the saving). The Nazis aren’t played for ‘laughs’ but they demonstrate the zeal and lack of intelligence that always makes good disposable baddies. There’s also banter a’plenty between Maeve and Lee Sizemore (Simon Quaterman) and a reluctant buddy-movie vibe for Bernard and Stubbs channeling Crockett and Tubbs (though Bernard’s entry into the park is far easier than one might suspect from a top-security location). Back in the Delos workshops adjacent to the parks, it’s not just cowboys and indians but, look closely and there’s also a familiar-looking dragon (look closer still and the ‘technicians’ working on said beast are Game of Thrones showrunners David Benioff and D.B. Weiss), though the HBO show resists the obvious opportunity to formally name that stablemate destination as Westerosworld. Technically, there’s a line about someone wanting to open a park with the dragon in Costa Rica, too – so Jurassic Park could also be added to the homage mix.

That’s not to say there isn’t ‘clever’ in the mix. Screen-proportions differ from normal size to widescreen to indicate differing ‘reality’ and – in-story – it’s Maeve, once again, who works out how to doubly overload the simulation system, first by asking two technicians to compute the square-root of -1 (leaving them arguing for hours) and then pushing the Warworld scenario beyond its pre-programemd perameters. The reveal that, despite appearances to the contrary, our main characters aren’t wandering around the same facility (that, in fact, Maeve and Lee aren’t actually wandering around anywhere) is a nice touch, if a familiar conceit the show has used before and the tell-tale ‘glitches’ and physical tics and ‘tells’ that Quaterman and Hemsworth bring to their respective characters’ are well-executed. Though there are good performances throughout, needless to say, this is Thandie Newton’s episode through and through. She does snark, sadness and desperation so well and manages to simultaneously be a fashion icon – after brothel-madam, homesteader, business-woman, geisha and supremely confident in just her own skin, she pulls off the WWII-look and ends up in a dinner-dress to kill for.

Westworld always benefits from its well-used budget. As always, the series is beautifully shot, not least in the Spanish vistas doubling for wartime Italy. The SFX department works seamlessly with an already cinematic backdrop and every frame has a well-earned poise and confidence.

It seems this could be our last visit inside the actual parks for the foreseeable future, the action switching to the ‘real’ world, which is something of a shame, even as it opens up other possibilities. But The Winter Line – taking its name from the string of Italian battlefield front-lines of WWII – is an episode that’s fun and just clever enough to entertain rather than flummox; complex but not frustratingly so, and is able to simultaneously nudge the narrative onwards. That’s a lot of plates to keep spinning, but it spins them well.

And when you throw in Nazis and dragons as well…. well, what more could you want? 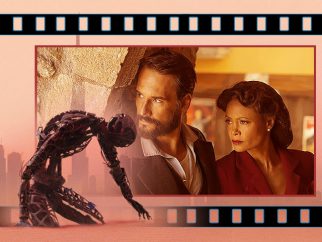