Part 'Blade Runner', part 'BSG'... the new 'Westworld' has a wider frontier and a new landscape to conquer...

The parks owned by the Delos corporation appear to be in turmoil. The massacre of its clients mean the venues appear to be closed for good and the company’s fortunes in doubt. As the outside world assesses the damage, those invested in technological frontiers contemplate the implications… and the opportunities in the wider world.

But what no-one yet realises is a wider consequence. Several models escaped the carnage, even after orchestrating it, and now in that outside world they can pass as humans.

The parks’ robots were created by man, but they’ve evolved, they’ve rebelled.

And they have a plan…

The title for this Season Three opener is Parce Domine which is the name for a short chant in a Christian ritual. One suspects that while religion and faith will play a part in the upcoming series, this is still a show with a very long-game in mind.

The truth about Westworld is that it’s ambitious, clever, smart, visually stunning, imaginative, compelling and challenging – which is a pretty impressive set of coding for any television show, even in this day and age of chance-taking entertainment. Those are all qualities to be applauded and admired. But it’s also entirely fair to say that it can be overtly-complex, smug, inaccessible, enigmatic and ponderous… often being amazing to look at but infuriating in the way its jigsaw pieces slowly fit together at a sub-atomic level… and , even at its end, can leave your head spinning with implications. In many ways it’s like looking at performance art or an abstract optical-illusion painting. It’s either beautiful or a mess. Or both, depending on where you stand.

The show also seems to reinvent itself with each season. The first run was a clever story based squarely and familiarly on the concept of the original Michael Crichton film but delving deeper into the morality of creating ‘people’ to be playthings. It was mobius-stripped down to sleights of hand and with a conclusion that seemed to satisfy while promising to open it up further. Rather than wider, the second season went deeper and was far less easy to follow, revelling in its time-line deceits but with those chronological-offsets no longer such a surprise and often a bit too indulgent. It was still clever, but in a preening, self-aware ‘let’s fool the audience’ way that sometimes detracted from its entertainment value.  By the time the credits rolled at the end of the last run – way back in mid-2018 – the audience were  nodding their heads with a ‘Hmmm, that’s what that meant!‘ rather than reeling in genuine satisfied shock value. There is, after all, a difference between wanting to immediately go back and watch a series over again for better enjoyment and needing to do it to simply make sense of it all.

The third season… well, it’s far too early to tell, but once again there’s a wholesale shift in the gears, an absence in time to account for and a terrabyte worth of questions it seems in no hurry to answer… which can be a significant obstacle given that I challenge anyone to remember exactly where we left everyone and what had just happened, except in the broadest way. (Never has a show required a ‘Previously on…‘  so much). This new run, beginning with Parc Domine, initially feels like a cross between the elegant sophistication of a streamlined car commercial and the corporate ambition of a chrome-plated Blade Runner – filmed in actual daylight. It’s production-designs, from buildings to cars and back again, are shoe-ins for future award ceremonies and the sheer ambition of its world-building is beguiling. But therein lies the wrinkle because while it’s all slick and functional,  it’s not entirely clear what any of it means, how invested we still are in characters we know – ones who have significantly shifted in look and agenda in the gap between seasons – or if we’re going to like the whole new wave of supporting players in the mix. At times, despite more linear story-telling (or is it?) you found yourself distracted by the architecture rather than looking at the story – which could be yet more metaphors for the robotic revolution in and of itself.

Westworld III‘s greatest strength and difficulty is spending so much time outside the park. It’s a concept full of potential: the artificial life-forms out of the ‘cages’ they were in, infiltrating society and with an agenda not to so much live under the radar as to bring it crashing down. But this isn’t a t-rex crashing out of its Jurassic enclosure, it’s a bird  secretly gliding away. To keep us enthralled, it needs more than mystery: it needs to make us invested and, frankly, humanity is mainly represented here by disaffected individuals – bankers, socialites, olygarchs and people who eat  pineapples on pizza or the complacent, unsuccessful downtroddens. So, if you aren’t actually rooting for the robots, you’re probably missing the point.

Aaron Paul (Breaking Bad) is rapidly establishing himself as the go-to actor for disaffected blue-collar characters flirting with crime just to get-by. There’s no meth so far, but Paul’s Caleb Nichols is certainly a distant relation to Jesse Pinkman, possessing the same mixture of bad choices and luck,  just with a better zip-code. It works to the same extent as casting Robert Downey Jnr as Tony Stark – reducing pages of exposition needs down to a shambolic glance and resigned workmans’-comp shrug. Meanwhile Dolores (Evan Rachel Wood) has let her country-girl demeanour drop away and is now a washed and brushed up debutante, a mover and shaker with the look of a super-spy and with her eye on a bigger prize in the world itself. Wood relishes the challenge and struts in a way that defies the high-heels. (Luc Besson must be a feverish mess at the thought of it).  It’s only in the final seconds of the first episode that their worlds collide and perhaps spark more potential in their different approaches and how they might help each other.  Jeffrey Wright as Bernard/not Bernard is physically sidelined into what appear to be two personalities inhabiting the same body as a worker in a small island town and able to switch when needed. How did he get there? More importantly how long until we get up to speed too? We only get to glimpse Thandie Newton’s Maeve after the credits, awaking in a location and time that seems to be Nazi Germany (so, logically, one presumes back in one of the ‘parks’) which further indicates that we are missing details which the show will attempt to neuro-knit together as we move forward.  A useful ‘This season’ montage hints at people and incidents to come, but let’s not frazzle our brains too early.

Jonathan Nolan thrives when addressing the moral complexities of AI and the human condition (his Person of Interest show was a hugely under-appreciated if quieter tour-de-force working within primetime network restrictions) and he’s given full rein here which allows more and gives it.  His personal and industry partnership with Lisa Joy has also proved dazzling. But how many times can the show reboot while still burrowing into its own source code? It feels like the show has upgraded, a literal Westworld 3.0, but with short-cut demos and streamlining that sugget a better user-interface while still working out some of those pesky bugs.

The West Wing made me feel smarter and wanting to know more with each episode, Westworld often makes me feel like I’m more jacobite than terrabyte – still glancing over my shoulder at the Alexa-powered microwave with admiration but suspicion it’s cooking up something else entirely. 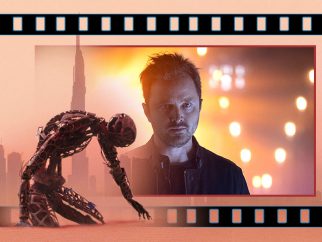