Exposition is futile? Lots of walking and talking and explaining in this latest episode...

As the crew of La Sirena argue about their next move, it seems that the broken pieces of their relationships will have to be mended quickly rather than perfectly. As understandable distrust keeps its foothold, it’s time for some frank conversations, stark confessions and revelations about the past.

Meanwhile back on the Borg Cube, Elnor has help from an unexpected source. But while Seven of Nine knows how to make an entrance, can they find an exit strategy that doesn’t mean giving up their humanity?

With only two more episodes to go beyond this week’s outing, various threads are finally interweaving and some long overdue explanations take centre-stage – and that means a walking-and-talking episode that’s high on intense looks and deep, meaningful conversations but which feels like exactly that… interesting viewing rather than the compelling kind.

There’s some, hopefully intended, moral murkiness for the bigger plot. While some scenes naturally want us to support Picard, Soji and the crew of the La Sirena, the more that one sees information about Commander Oh (Tamlyn Tomita) and the Romulans’ perspective of the danger of Synths, the less its easy to completely dismiss them. It’s easy to quickly and utterly condemn their ruthless methods and zealot behaviour (Peyton List’s Rizzo continues to be a pantomime villain while her brother is just conveniently missing in action) but it’s becoming easier to understand their base fear… their collective visions (as part of yet another vowel-heavy secret cabal that have littered this series like… well, scrabble counters) give them a reason, if not a full excuse, to be terrified of the dangers Synths might become.

The conversations and personal moments on the La Sirena work the best.  Picard’s conversations with Soji (Isa Briones) work well on an emotional level (with some unapologetic social-commentary and analogies thrown in), Raffi’s (Michelle Hurd) moments with a forlorn Rios (Santiago Cabrera) ring true and even Alison Pill’s Agnes Jurati manages to regain some sympathy after waking up to face the people she betrayed (though Rios seems to have conveniently forgotten their ‘encounter’ from a  few weeks ago). Briones continues to be impressive in her nuanced performance as Soji, though one suspects that the plot developments mean she could have yet another role to play before the season’s done which seems a little excessive. But this week it’s Cabrera pulling the most screen-time as various hologrammatic versions of Rios in scenes that are often structured for fun. The different accents might range from good to cringe-worthy but it’s a long-overdue pay-off to the whole ‘variations on a theme’ joke that’s been running for weeks and works well as both comedy and group therapy.

Perhaps the biggest problem here, at least in this reviewer’s opinion, is the Seven of Nine material. While the recent episode reintroduced her as a conflicted ‘Ranger’ (Hello, Babylon 5) with vengeance in mind and a far more gung-ho character than her more calculating, exploratory time on Voyager, Broken Pieces essentially assigns Jeri Ryan a role that’s just a cookie-cutter action heroine (a less interesting mix of Linda Hamilton / Sigourney Weaver) but with all the poses of a well-articulated action-figure. Which is doubly a shame as the scenario they set out for her in this entry – having to decide whether to temporarily reconnect with the Collective so she can engage the Romulans  – should be one rich for drama, pathos and even sheer horror. We saw Picard suffer PTSD the minute he beamed aboard the Borg Cube – just from being there – and yet Seven, whose past experiences are arguably just as bad or worse, strides into battle guns-blazing and barely registers any  real discomfort in her location. The eventual decision to ‘reconnect’ should have been truly traumatic, like an alcoholic forced to take a drink after years of sobriety, like a rape victim revisiting the scene of their assault or a trauma patient going back to a hospital and knowing the cost of such an experience is a last resort. But instead of a scream there’s a shrug, some minor lip-service, a moment of reluctance and hesitation and then Seven makes the jump. It could be the case that the show feels its already explored the trauma territory with Picard and Hugh, but Seven’s decision and its result, one that seems inexplicably temporary (and would the ‘connected’ Queen persona really refer to Seven as ‘Annika?’), ultimately results in actions that prove wasted and worthless when the plan fails to really work as planned. However it does give Elnor (Evan Evagoria) a chance to do more swirling and swooshing with his blade for a few minutes and then act as further exposition-fodder.

Broken Pieces attempts to start piecing things together, sometimes feeling like a selection of scenes of good character drama from seasoned professionals, sometimes like a production meeting with a checklist of agendas that have to be brought to the floor and seconded before we continue (‘Guys, wait, we totally forgot to explain Rios’ back-story! Quick!‘) and so its strengths are in the personal scenes that result from that… with  the weaknesses being in its sheer scale of infodump structure, making it an important part of the first season’s run but far from the most entertaining. 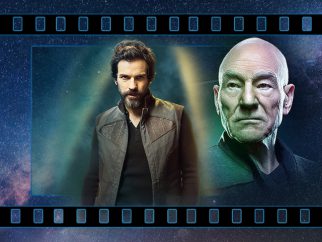