'Stalker', the latest episode of The Walking Dead', is perhaps the scariest outing in a long time...

While one group of survivors has escaped the caverns – though with casualties – Alpha (Samantha Morton) is not wasting any time in making sure the people of Alexandria feel the wrath of the Whisperers. She sends Beta (Ryan Hurst) to track down the errant Gamma (Thora Birch), who is now in custody within the town’s walls. But walls don’t stop people like Beta nd he has a unique way of creating a distraction.

It might be redundant to say that The Walking Dead is a television show about zombies, but in recent times, the emphasis has been more on it being a tale of survival, social dynamics and shifting values than the more obvious potential for outright horror. That’s fine – you can’t do undead battles every single week and we know that full-on humans can also be bigger monsters enough given the right/wrong motivations.

But it comes as a welcome surprise that the tenth episode of the tenth season offers an almost pitch-perfect presentation of the horror genre… channelling real tension, pay-offs and carnage. As Beta (Ryan Hurst) literally rises from the grave in the middle of Alexandria, with a solid strategy to wreak chaos within, he starts by creeping through the streets and houses like an iconic bogeyman… a scene where he lingers in the background of a suburban home and then attacks from the lights-out darkness is straight out of the Jason/Freddy/Michael Myers handbook and Stalker could only have been better if the episode had been broadcast over Hallowe’en itself.

The cinematography is also notably effective throughout, from magnificent sweeping overhead shots that unapologetically seem to be celebrating being free of the claustrophobic caverns of last week’s chapter –  to artfully lit scenes and askew tilting and close-quarter combat, there’s a feel throughout that everyone involved brought their A-game to proceedings and delivered accordingly. It’s not so much that it feels like an expensive episode, more so that it’s been an instalment where every penny ahs been spent wisely. Norman Reedus and his fight with Alpha is more savage and intense than we might have been expecting, with some notable repercussions and there’s a wake-up call to viewers who sometimes take the blood and guts for granted. This time it literally cuts deep, flowing both  free and dangerously… and for a moment you find yourself wondering – if just for a few seconds – if the show is genuinely going to up the numbers of those it is writing out. That it doesn’t quite follow-through on the ‘to-the-death’ angle is only mildly disappointing.

Seth Gilliam’s Father Gabriel has been given some added zeal this season. If the character was ever a weak link he seems to have turned a corner and even other characters are raising an eyebrow or two about his willingness to inflict pain and injury on others if it that’s what it takes to defend Alexandria. Rosita (Christian Serratos)  and her recent traumas also get explored as she faces nightmares and actual threats. There’s no sign of either Melissa McBride’s carol or Jeffrey Dean Morgan’s Negan, but it’s a tribute to the production that they aren’t really missed.

The Walking Dead doesn’t – and shouldn’t  – do episodes like this every week, but once in a while it’s good to remember that some of the oldest ways to scare people are the best and that the post-apocalypse needs to keep everyone on their toes… 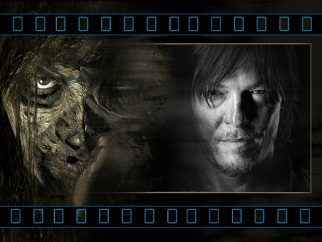 Bond Gone Viral? April is no ‘No Time to Die’…