One of the best-balanced episodes of the series starts to tie together some of the main threads...

Picard and the crew of the La Sirena now know where to find Soji (Isa Briones), but getting permission to travel to – and enter – the Borg ‘Artifact’ will mean slicing through some substantial red tape that no-one has time to navigate. But even when a solution is found, it’s a mixed blessing for Picard. Memories of the time he spent being assimilated by the Borg come flooding back and he’ll need the help of an old friend with similar experiences to avoid stumbling into the abyss.

And even as they close-in on Soji, it seems that Narek  (Harry Treadaway) is entering his own endgame, ‘helping’ Soji explore her memories in an effort to extract the information he needs to find the synthetic creations’ point of origin. Will he let his feelings cloud his judgement and how will Soji react as her world crumbles around her and she has no-one left to trust?

After a week away from anything to do with the Borg Artifact a majority of this episode’s plot takes place in, on or in the vicinity of the ominous cubed craft – the episode’s title being, appropriately, The Impossible Box. Once Picard has worked out a way to get permission to be beam across under dubious if official credentials then we get some understandable PTSD.  While there can be very few people watching the show who aren’t aware of The Next Generation continuity, it’s helpful to be reminded of Picard’s experiences in the classic Best of Both Worlds episodes and their resonance.  Jean-Luc has flashbacks to his imprisonment are mainly images from the tv show, but they do convey what must be the overpowering emotions that must be happening – essentially the cosmic equivalent of a survivor going back to somewhere akin to Auschwitz, a place where their humanity was all but stripped away by overseers. It mostly works well – enough to provide punctuation rather than to dominate and there’s one effective moment where half of the contemporary Picard’s face matches up with another half, a projection of his time as ‘Locutus’ and it does send a genuine chill.

Isa Briones as Soji is given some hefty emotional material as she finally begins to realise that a majority of her memories are lies and there’s a palpable sense of her losing herself as her world crumbles and any idea that Narek (Harry Treadaway) would risk his mission because of any genuine feelings for her now seems unlikely given his willingness to kill her. It’s also good to see Hugh (Jonathan Del Arco) being more pro-active than he’s been so far, another link to The Next Generation but now able to return an old favour to Picard, the man who was instrumental in freeing him originally. Though Seven of Nine and Picard discussed a common bond in last week’s episode, it could be argued that Hugh and Picard can more closely relate to their shared, past horrors. Alison Pill, revealed as the compromised Dr. Jurati (see…we knew she was no good!) also gets to run the gamut of emotions – seemingly feeling genuine remorse for her murderous actions, but possibly just as dangerous in her melancholy.

Quibbles?  Only minor ones in this otherwise impressive episode. Both our Romulan secret-police miscreants kept referring to Soji’s ‘unconscious’ mind, which should surely have been ‘subconscious’ mind – a common mistake in speech and script-stage but one that should have been caught ahead of filming, especially given its repetition. Raffi (Michelle Hurd) may still be an emotional wreck after her familial dead-end, but that doesn’t seem to stop the crew from basically using her skills and then throwing her back into bed to sober up – and that seems a little cold.  Narek trapping Soji in a sealed chamber to die by radioactive gas is certainly a dramatic plot-beat – though it would , of course, far more logical and ‘safer’ to kill her faster and more efficiently with a phaser or similar. Peyton List’s Narissa remains something of a simple boo-hiss villain, prone to sneering and scowling and flirting with her own brother as if they were fresh out of Game of Thrones, but only providing a fairly formula foe so far.

Director Maja Vrvilo definitely gives us the best-paced and balanced of the episodes to date, it’s good that Picard is now in its stride, offering a darker and more complex version of the Trek universe while still remembering the value of being simply entertaining. 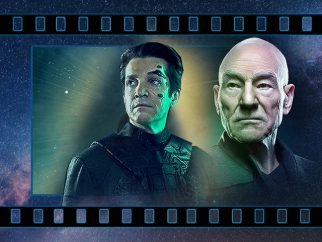