What Dreams May Come? The Doctor prescribes some cures for nightmares...

The Doctor drops off her companions in modern-day Sheffield and is somewhat conflicted about how to spend the next day by herself.  But the Tardis alerts her to an unusual reading that comes from Ancient Syria and so she heads there to discover the source. It would seem a monster is stalking the city’s streets and the only survivor in the immediate vicinity is a young girl named Tahira.  But while the Doctor battles  a large and hungry beast, her ‘fam’ seem to be having weird encounters of their own. Graham has the visions of a woman trapped in an a ball of energy, Yaz recalls the an unpleasant memory from her days before joining the police and Ryan finds that one of his close friends has fallen into depression in his absence. However all of these encounters appear to be linked by the presence of a sinister man dressed in black…

Reuniting in the Tardis, the Doctor is baffled by the experiences but seeks a way to locate the area of space that Graham saw… and the Tardis takes them to a seemingly impossible cosmic event. But who is waiting for them there and why?

With the welcome return of a cold-open before the main titles (something missing from most previous entries for no apparent reason), there’s certainly a decent idea at the heart of Can you Hear Me?  – the concept of an entity using nightmares or insecurities to fuel and power itself or its needs. To an extent it’s territory already touched upon by Moffat during the Matt Smith era with  The Dream Lord (Toby Jones) in 2010’s Amy’s Choice. The initial spooky scenes – alternating between modern day Sheffield and ancient Syria/Aleppo –  promise much and some of the execution is unnerving… but after the set-up and the ‘fam’ comparing notes, both the logic and the telling of it, it all goes a bit astray.

The SFX are well done  – the rendering of Ancient Aleppo from above is worthy of Game of Thrones, the monstrous fingers stretching into frame are scary,  Zellin’s fleeting appearance inside the Tardis is sinister and the floating, disconnected digits are, well… just plain creepy. But then, when the explanations come centre-stage they are a handbrake turn into a tropey and disconnected science-fiction set-up of galactic entities with a cosmic agenda. And the budget, already used to provide some nice scares and tone largely goes into free-fall with Zellin and Rakaya (looking like a Storm cos-player) hardly cosmically-intimidating  once they are dragged out of the shadows. Mid-way through the episode, we get another history-lesson about Zellin and Rakaya’s origins, an animation that’s one-part cave-painting and one-part Hitch-hikers Guide read-out and which comes across as another cost-cutting exercise than a creative win.

The actual script – credited to both Charlene James and Chris Chibnall – remains somewhat clunky, perhaps better suited to the written page than it is on screen. Once again, Whittaker’s dialogue mostly falls into two categories: an internal monologue that feels like stage-direction (Seriously, when do people who  are alone actually say ‘What was that?‘ aloud) and huge amounts of for-the-audience exposition (the verbal  ‘introduction’ to Aleppo and its history by the Doctor – again to herself – is just achingly creaky). Zellin’s gloating dialogue isn’t much better and the fact that the Doctor is initially played so easily by the villains is also a double-edged sonic: it’s interesting to have the Doctor’s compassion played against her, but most previous incarnations would not immediately think about freeing a prisoner without checking their rap-sheet first.

Ian Gelder is initially effective as Zellin, Clare-Hope Ashitay is rather bland as Rakaya and, unfortunately, Aruhan Galieva as Aleppo-survivor Tahira becomes another victim of  the increasingly-common ‘potentially-interesting-character who isn’t asked to do as much as expected’ scenario that’s come from having too many characters on screen with too little to do.  Sharon D Clarke reprises Graham’s dead wife Grace for one scene  and, perhaps ironically, could have done with more time.

There’s also a extended epilogue which gives some long-overdue character moments for ‘the fam’.  We see Yaz in more troubled times and meeting a good Samaritan in uniform who might well have been the impetus for her becoming a police-officer (though it’s surprising they wouldn’t have met subsequent to those events); Ryan reaches out to his friend telling him to seek counselling and Graham talks to the Doctor about his fears of his cancer ever returning (the Doctor’s awkwardness and not being able to provide a completely reassuring answer is meant to be endearingly ironic, the problem being we’ve seen Whittaker’s incarnation give pep talks before, so it doesn’t really scan. One can imagine it working better with Capaldi). It’s all a well-intentioned attempt to address mental issues and depression, with the BBC adding a helpline for those affected by the issues, but ultimately feels like something of a filler and footnote.

There are mythological Whovian references galore: with shout-outs to the Celestial Toymaker, to the Eternals and the Guardians and a vision connected to the Timeless Child. There’s even some groundwork laid about the ‘fam’ moving on in case the world moves on without them.  Yet Can You Hear Me? doesn’t quite have the courage of its central convictions – happy to tease expectations of a more cerebral, edgy outing and then pulling back to basics and broader-stroke, more predictable story-telling. (Tonally, it does feel like it could and should have immediately followed Fugitive of the Juddoon rather than the disappointing Praxeus…).  Not as awful as some recent entries, not as good as it could have been with another pass at the script, essentially, this feels like a note came from above asking for a mix of Moffat concept and classic-series execution and instead of blending such, the two elements simply sit alongside each other making small-talk and never quite producing the hybrid needed.

In many ways Can You Hear Me? symbolises just how much potential the show still has and yet how often it’s stumbling in the process… 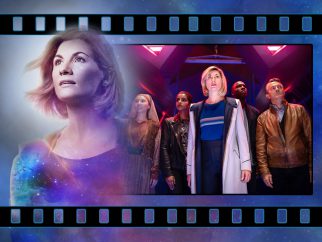 7.3
'Doctor Who - Can You hear Me?' (tv review)
Tags
BBCDoctor Who
Categories
TELEVISION REVIEW
SHARE THIS ARTICLE
OLDER ARTICLE