Still in its 'set-up' stage, the interesting but slow-moving 'Picard' needs some warp drive behind it...

Fourteen years ago, Admiral Jean-Luc Picard demanded that Star Fleet accept his plans to save Romulan refugees or else accept his resignation. To his surprise, they choose the latter and – just like that – his distinguished career was over.

But his decision has effects on others and his colleague Raffi (Michelle Hurd) who worked with him on the plans is not given the luxury of resignation.  Now Picard needs her help and years after last contact – and having fared far less well – she’s in no mood to offer any kind of forgiveness or assistance… but with Picard and his friends targeted for another attack, it’s a choice that may be taken out of her hands as they locate a ship to head off-world…

Across the galaxy, Soji is given the rare chance to speak to one of the highest-ranking ‘survivors’ of the final Borg attack on Romulan space…but the traumatised Ramhda, an expert in mythology, believes she’s met Soji before, though the young researcher has no memory of that encounter… or for that matter her true origins.

But with many agendas at play, forces are aligning to discover the truth and others, are just as determined to stop it…

Though littered with analogies to real-world controversies and priorities, it’s still tempting to feel that the first three episodes each running around 45 minutes a piece – with this latest aptly entitled The End is the Beginning – form what could have been a better paced singular 90 minute pilot episode and instead we’ve been treated to a lot of expostion on Romulan mythology and a series of clandestine meetings that are more enigmatic than exciting so far.

On the Borg ship it’s still not entirely clear what the circumstances and role of Joji (Isa Briones) actually are… yes, we know there may be a underlying mission of which even she is not aware and that she’s being manipulated by Harry Treadaway’s Narek and his uncomfortably close sister Narissa  (Peyton List)…  but even the narrative circumstances are not distinct: the story seems to indicate Soji is  a researcher but also there to empathise with the recovered comatose Borg drones that are being stripped of their tech and studied. It’s easy to like Soji, but she still feels like a number of classic sf tropes thrown together and where, like the Borg, some of the loose thematic stitching still shows.

Sir Patrick is still a strong screen presence in everything he does but it does feel as if that sheer ‘presence’ is being relied upon to carry a little more than it should. Picard and Stewart move slowly through the scenes, even in the midst of action and there are moments – such as during the attack on the chateau – where others’ more fluid choreography makes Picard look like an old man rather than just a seasoned adventurer. That could be a distinct decision to increase the idea of a veteran bringing together a new ‘team’, but it’s a double-edged bat’leth.

Michelle Hurd gives us a Raffi who feels like she’s side-stepped out of a supporting role in a James Cameron movie and the character is rightfully frustrated with Picard’s actions from fourteen years ago ruining her life – though more angry with the fact he hasn’t contacted her in the intervening years. It’s another distinct sign that Jean-Luc (or ‘J-L’ as Rafi awkwardly calls him) is sometimes his own worst enemy and perhaps failing in his once sharp judgement and loyalty to his friends and crew. Those sacrifices might work a little better if Raffi had actually been a face we knew from the series, but Hurd at least makes her someone with whom we can empathise from the outset.  Santiago Cabrera makes an interesting Rios who could easily have been cut from the rugged, snarky smuggler cloth but appears to have a little more about him and it could be interesting to see him balance out a disdain for Star Fleet while very quietly admiring a legendary officer on his ‘bridge’.

It’s good to see Jonathan Del Arco reprising ‘Hugh’ from the TNG episodes, though it’s hard to tell how much use he’ll be put to. Orla Brady as Laris and Jamie McShane as Zhaban continue to be enigmatic additions to Picard’s  chateau’d life, adding hand-to-hand combat to heir quiver of unexpected but convenient special-talents… but for a minute it looks as if they’ll both be more collateral damage to a surprise attack. Picard finally getting off-world may curtail further involvement but it would be good to see them again (though one wonders why they don’t accompany him?).  Alison Pill as Dr.Agnes Jurati arrives at an almost suspiciously well-timed moment to save the day and despite her wide-eyed wonder at the chance to boldly go and come face-to-face with a sentient android, one wonders if she’s quite as trustworthy as she appears.

The few inevitable wrinkles?  During an early flashback scene, Stewart seems to be continuously distracted, even glancing off camera during key dialogue, Commodore O’s retro-sunglasses look very out-of-place, the EMH on Rios’ ship has the most bizarre, inconsistent accent(s)  and the SFX department’s camera-sweeps into the Borg cube are growing a little repetitive. But these are largely minor niggles.

The episode ends with a classic ‘Engage!‘ but as the ship heads into warp, there’s also a distinct ‘At last…‘ from the viewership and which one hopes upcoming chapters will build upon a little faster… 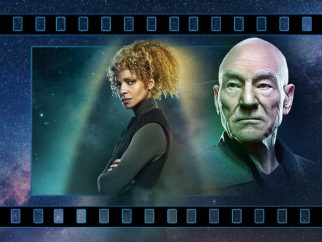