The Best of All Worlds..? Engaging ‘Picard’ makes it so…

'Picard' isn't TNG. It's a generational mix of intrigue, heart and all good things...

Retired Admiral Jean-Luc Picard (Patrick Stewart) is happy – or at least content – to live out his days at the family vineyard, far away from the stars to which he once went boldly and from the institution of Star Fleet which he feels has lost its way.  His life has a few select friends and a beloved pet pitbull he’s named ‘Number One’. However his dreams are full of faces and imagery from the past and the feeling that he is missing something important.

Elsewhere a young girl named Dahj (Iisa Briones) is also living through her own nightmare, surviving an attack against impossible odds and realising that she needs help. Somewhere, deep inside, she hears the name of the only person who can help her: Jean-Luc Picard.

But as both search for a wider understanding and specific answers, it would seem that various forces are more invested in stopping them from doing so. Does the truth lie in the legacy of an old Enterprise crew-mate, or is it deep in space in the angled shadows of something even more deadly?

Twenty-five years ago, the regular run of Star Trek: The Next Generation ended on an episode entitled All Good Things and on a card game, so it’s hardly a coincidence that the opening moments of CBS All Access’ Picard begin with a new deck of cards being played, albeit ones also cloaked in metaphor and foreboding.

There are several obvious things that work well for Picard. One of them is unquestionably that element of nostalgia. Star Trek: The Next Generation was not only a beloved, landmark show at the time of original broadcast but one that allowed the franchise to resonate onwards ever since. The second is the sheer presence of Yorkshire-born Sir Patrick Stewart who made the titular starship captain a character who balanced a sense of duty, principle, stoicism and even hubris… but who remained resolutely human. And, lets be honest, Stewart is just an excellent actor – which always helps. While never being as ‘warm’ or approachable as some sf heroes, his Jean-Luc Picard was one of those creations in whom you trusted implicitly to try and do the right thing. It’s those combined elements that are, thankfully, all in place for this latest mission and that promise much for the episodes to come.

Rather than reinventing the wheel, the show gives us a Picard with an extended throughline through to the stories we already know. Yes, he’s now retired; yes, he’s more cynical and increasingly at odds with the shifting politics and principles he’s seen Star Fleet take, but he’s the same man in the ways that matter, guided by the past as much as looking to the future,  horrified by a potential secret that comes to light but also invigorated by the chance to know that his own story is far from over. While Discovery is arguably all about the concept, Picard is innately driven by purpose – something older, wiser and deeper.

Remembrance (directed with aplomb bu Hanelle M. Culpepper) itself is a good pilot, helped by the fact that while some set-up and exposition is needed for the uninitiated, the production knows that most people coming to the party already know the bullet-points. The rear-view mirror is firmly established, but the future is still for the taking. That’s not to say there can’t be potential speed-bumps. For example, the whole ‘android problem’ is a familiar sf trope already memorably mined by the likes of Blade Runner and Battlestar Galactica (and a positronic plethora of far inferior takes) and it will be up to the show’s writers’ room to find a way to get beyond the possible deja-vu factor that could easily come into play. Equally, an elderly mentor coming out of retirement, to remind the youth of codes of honour is another reliable go-to, but there are plenty of ways to play that which rely on the strength of the performer – and there’s no argument Stewart is ever up to that challenge, not afraid to invest Jean-Luc with greater age, greater regrets but also greater drive .  Brent Spiner may be older, but his reprise of Data works just well enough to convince and it will be interesting to see how much he features going forward. We know other familiar faces on the way and they will be welcome as well.

In a role that requires some emotion and physicality, Isa Briones does a good job as Dahj and if some of her earliest dialogue scenes with Stewart feel arguably slightly stilted it evolves quickly and effectively. That she will get the chance to essay more than one role during tis run will also be interesting to watch. Kudos to both her and her stunt-double for some impressively choreographed fight sequences that feel less like wire-work moves and more like confident stylised combat. Alison Pill (The Newsroom, Snowpiercer) portrays a AI programmer whose character could go a number of ways and there’s also good support from Orla Brady and Jamie McShane.

Right now, the show could boldly go forward in any number of ways. It’s not The Next Generation (Continued) and nor should it be – but its from the same vine and this mostly earthbound entry-point is a positive, heartfelt and engaging start…

Star Trek: Picard is now available on CBS All Access within the US and available from 24th January on Amazon Prime Video in the UK… 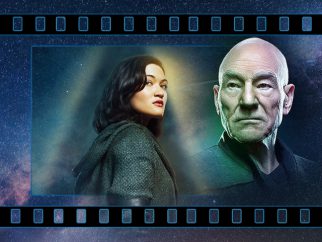 Doctor Who: Whittaker will do at least three seasons…