The final 'Short Trek' of the current run chronicles a Martian event that will tie-in to the 'Picard' series...

Two young but very different Earth-based students Kima (Ilamaria Ebrahim ) and Lil (Sadie Munrie) separately receive communications from Mars. It appears that Kima’s mother is stuck working on anti-grav machinery on the red planet’s Utopia Plantation and won’t be coming back as promised, though they enjoy their interaction. Equally, Lil gets the news from her father that he’s unable to leave his job as quality systems supervisor at the Mars Orbital Facility – something that Lil doesn’t take as well. It’s perhaps not a good start to either of their days and their individual journeys to the academy classrooms sees them collide – literally and emotionally. It’s clear there’s now an antagonism there – one that is to boil over and leave them both in trouble.

But the jealousies and petulance of their school life is about to be put into perspective when the Academy’s screens cut to a live transmission from Mars and an event that is going to have massive repercussions… for them, for Earth and perhaps, ultimately, for one legendary Star Fleet admiral…

Coming in at less than nine minutes of running time, the latest Short Trek – entitled ‘Children of Mars‘ – says an awful lot, though barely a word of dialogue is heard aloud in most of that period. While it doesn’t have the wholly self-contained aspect or perhaps quite the narrative whimsy of some of the other Short Treks to date, its remit turns out to be quite different: acting as an apparent, unexpected scene-setter and something of a prologue to the upcoming Picard series (which debuts later this month).

Starting without the traditional title sequence or a normal set-up, we’re straight into what seems like a rather simple, traditional tale of school-class rivalries but which ultimately turns into a future-historical ‘where were you when…?‘ scenario. The two girls at the heart of the seething juvenile feud take turns to side-swipe each other through what would normally be a typical day with each of them scoring points – physically and emotionally – against the other. But the news-feed from Mars breaks in, of which we only know the strap-line: ‘Rogue Synths attack Mars – 3000 estimated dead….‘ and through the images of utter devastation at the hands of a vague enemy, we are given knowledge of the loss the girls suddenly share and an event which changes everything for them.

It’s not quite clear exactly how this outing connects to the Picard series, though the attack’s visuals in the former and the mention of ‘synths’ seem to tie in to the latter’s recent trailer and what we know of the upcoming CBS All Access-platformed mini-series. We know from an on-screen shot here that Jean-Luc is still part of Star fleet at the time of Children of Mars, yet has been retired for around a decade by the time Picard begins, so could this or its repercussions be linked to the unspoken tragedy that led him into retirement and out of step with the organisation in which he made his career?

Through much of the piece, David Bowie’s Heroes (as sung by Peter Gabriel) plays, a quiet anthem for small people caught up in big events.  The result sends its message of how people are divided or united by tragedy, rising or falling in the moment.  It’s all executed well enough… a little clinically, perhaps – we really don’t get much of a backstory for the two girls or why their rivalry was ignited so strongly. There are no real boundary-pushing moments and the short hits pretty much all the requisite beats in familiar ways… our hearts don’t truly swell and the music doesn’t quite soar, but… yes, there’s something in that mix that does work, possibly both helped and hindered by the innate brevity of the piece, the lack of some specific information and the idea that several of the themes and events might well be expanded upon soon in that regard (hopefully).

Director Mark Pellington returns to give some nicely-choreographed camerawork and framing and the writing comes from the reliable hands of show-runner Alex Kurtzman, Kristen Beyer and Jenny Lumet. This, more than ever, feels like it could have been a DVD extra – probably on a future Picard box-set – a description that is not meant to negate the quality of the piece, merely that it feels like well-crafted additional scenes rather than a complete story, a well-produced prologue or footnote montage rather than its own episodic entry.

Still, it’s been another cracking run for the whole Short Treks – largely devoid of Discovery references, but once again proving their worth and diversity… 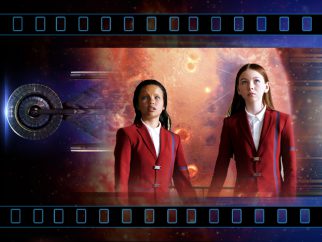